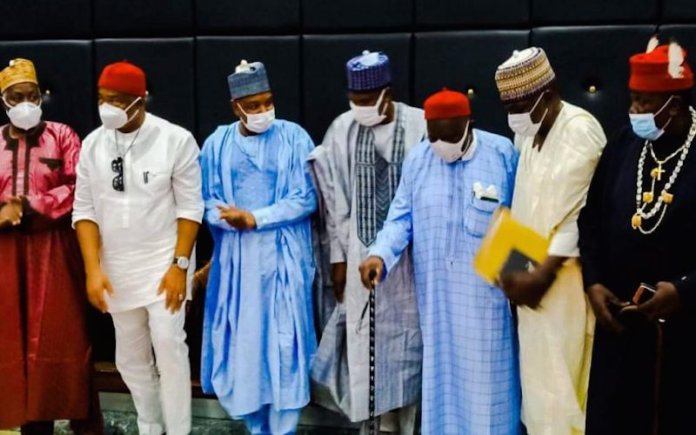 •Urge governors to protect all within their states
•FG rising stoutly to challenges of insecurity, says Lai Mohammed

Charles Ajunwa in Lagos and Amby Uneze in Owerri

Determined to ensure a harmonious relationship among ethnic nationalities wherever they reside in the country, Governor Hope Uzodimma of Imo State yesterday hosted a peace parley in Owerri, with the governors of Jigawa and Kebbi states, Mohammed Abubakar Badaru and Atiku Baguda, respectively, in attendance.

The parley was also aimed at easing tension between farmers and herders in the South-east, and to promote peace between Christians and Muslims in the region.

On the same day, amid escalating killings by Boko Haram, bandits, criminal herders and kidnappers in the country, the Minister of Information, Alhaji Lai Mohammed declared that the federal government, “is rising stoutly” to the numerous insecurity challenges and that government is alive to its responsibility.

Uzodimma said he convened the interactive meeting for the purpose of fostering harmonious relationships among all the groups listed.

Addressing the audience at the Executive Council Chamber, Government House Owerri, Uzodimma harped on the need for sustainable harmonious and peaceful relationship between all tribes in Nigeria, irrespective of religious beliefs or political inclination.

He lamented the current security challenges in the nation which he said were being instigated by peddlers of rumours and false information, to encourage conflicts between farmers and herders, stressing that “the two groups should complement each other because they need each other to succeed in their businesses.”

The governors of Kebbi and Jigawa states, in their remarks, appreciated Uzodimma’s wisdom in convening the meeting, and acknowledged that all Nigerians have the right to live peacefully in any part of the nation, under the protection of the leadership of the states.

They advised that all criminals inhabiting the forests should be flushed out both in the Northern and Southern parts of the country and be prosecuted.
The governors stressed the essence of unity among all Nigerians, saying it is the only way the country can achieve greatness.

Representatives of the Christian, Muslim, traditional institutions, and Miyetti Allah, who spoke, advocated the need for sustainable harmonious relationships among all ethnic groups in Nigeria.
At the end of the meeting a communiqué was issued where all concerned committed to harmonious, peaceful relationship that would foster a united Nigeria.

Also present at the peace parley were the President General, Ohanaeze Ndigbo, Ambassador George Obiozor; the National Secretary of MACBAN, Baba Othman Ngelzarma; the Chairmen of Christian Association of Nigeria (CAN) from the South-east; Chief Imams from the zone; Leaders of Miyetti Allah from the five South-east states and heads of religious and traditional institutions.

Meanwhile, the Minister of Information, Alhaji Lai Mohammed yesterday declared that the federal government “is rising stoutly” to the numerous insecurity challenges and that government is alive to its responsibility.

The minister’s boast comes even as there is an upsurge in mindless killings by Boko Haram, bandits, criminal herders and kidnappers in the country,
The Minister, who spoke on a television programme in reaction to the recent meeting between Sheik Ahmad Gumi, a prominent

Islamic cleric, and some bandits in Zamfara State stated: “We (FG) are not only rising to the security challenges but we are also making a success of it.”

The minister appealed to all stakeholders involved in finding solution to the persisting conflict involving farmers and herders across the country to also strive to reduce tension, adding that waiting for President Muhammadu Buhari’s comments on the crisis was not important.
He said: “I think we should lower the tension. Nigeria is a big country, diverse. We must continue to live together, recognising each other’s rights.

“We are not going to score any advantage by heating up the polity. I think the governors, traditional rulers and religious leaders are all doing their best to ensure all issues are resolved.

“Comments (of the president) are not of importance; it is the steps the government is taking, and I can assure you there are a lot of back-channel approaches being taken to ensure that all these crises are tamed.”

On the meeting Sheik Gumi is having with bandits in the forest of Zamfara, where he appealed for peace, Lai Mohammed said there was nothing unusual about it.

“As I explained, when we want to resolve issues like this, we use a lot of back-channels. Again, it is not unusual to use a respected cleric to have the confidence of outlaws or bandits. As a matter of fact, they are probably ready to listen to him more than they are ready to listen to the government.

“They are probably ready to believe in them, so it is not unusual for him to act as a bridge between the government and outlaws to find solutions,” the minister said.

On the herdsmen crisis and the activism of Sunday Igboho, the minister said non-state actors were free to talk but the government was poised to ensuring the security of lives and property in the country.

The minister said: “I am glad that political leaders, traditional leaders, religious leaders are all coming together to ensure that this matter, not just in the South-West, but everywhere else is resolved.
“We are not going to score any advantage by heating up the polity. The governors, the traditional rulers and religious leaders are all doing their best to ensure that all issues are resolved.”