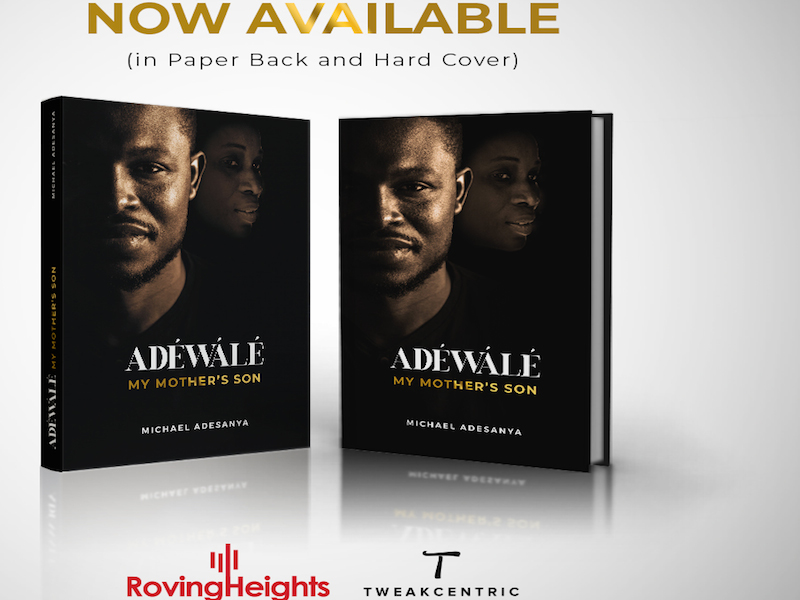 The world is framed by stories. Stories chart, as in a timeline, the lives and connections of different people. Stories can fit several descriptions: big stories and small stories; distinct stories and similar stories and even strange stories and near-normal stories.

What differentiates stories many times is the telling. And the reason is obvious. Each storyteller is unique. Every voice is distinct. The storytellers may be different but it is the reader who gets to determine which story is worth reading.

Naturally, there are nearly as many reasons for writing a story as there are storytellers.

Adewale – My Mother’s Son is a distinct story.

This 275-page book is a worthy read. The writer, Michael Adewale Adesanya, makes little assumptions. The tale is believable. The prose is engaging and the print is truly attractive with fonts designed to soothe the eyes and prevent strain.

The title is fitting. For Michael – the crown indeed came home. While Adewale is a common name in the western parts of Nigeria, the genuineness of this story makes it unique.

In Adewale – My Mother’s Son, a young man, Michael, embarks on a journey that became an exploration in self-discovery with truly amazing results.

The first three chapters provide a background. They traced the tale before the story. They give an insight into the lives of the grandparents on both sides followed by the circumstance that brought the parents together.

The chapters equally highlight the post-independence lifestyle, particularly in Benin City. A careful reader would glean the fact that Lagos was only just been built at this time with Agege described largely as farmland.

Another prominent take away from these chapters is the role of religion in the life of everyday ordinary Nigerians. Religion provided comfort, hope and many times an opportunity to meet and marry. The book showed unsurprisingly that Celestial church is big on prophecy. So, prophets, even would-be prophets, got plenty of respect, recognition and gifts. Michael’s mother, Omotayo was a prophet-in-training.

It also portrays vividly how loneliness can cloud the judgement and impact on decision making. Omotayo was a victim of the loneliness virus. It is natural for people staying in a strange land and unfamiliar environment where you don’t have the support and companion of friends and family members. Omotayo met and married Oriyomi in Benin City.

The author uses words in truly refreshing and interesting ways. See how he described the need for his parents to hustle for his upkeep: “Whilst my father managed the customers and cut the fabrics, my mother assisted as a seamstress. I crawled around the shop, reminding them of the need to keep the money coming.” Or consider how he spoke of the progress the parents were making: “As I grew older, our room, the one in which I was conceived, started to fill up. I would find more things to hit my head against as I crawled around.”

Fascinating styles and a great sense of humour.

Chapters 4 to 7 provided insights into the growing up years of young Michael and the birth of Gbenga.

The mother, Omotayo showed keen interest in Michael’s learning constantly offering advice to the teachers on how to help him learn.

He explained, “While school sharpened my wits and expanded my mind, my mother filled up the gaps in my knowledge. She made sure to know all my teachers from kindergarten to primary school, offering them tips on my learning nuances.”

Hear her: “Wale likes to be shown, not taught. Wale likes pictures… Wale likes asking why.”

These chapters also described the life of poverty. In describing the descent into poverty at Emurem, the author again utilized that uncanny word usage – “Faster than we mastered Muse’s skills, we started to look like him. Soon, we were tires down the dusty roads of Itún-Òkè in our briefs and on bare feet.”

The story evolved to one about the will to live and progress. It showed not just the desire but also the active and great efforts to escape from the grip of poverty. Omotayo worked to provide upkeep but more importantly maintained moral, dignity and secured self-esteem.

There is also an insight into the workings of different segments of society. The life of hawkers, the aspirations of motor park touts and the challenge of living as hired household helps.

One is equally introduced to the discipline, self-reliance and academic competition at Mayflower School.

By chapter 8 titled Outlying, things were already coming to a head. Michael discovered and exploited his leadership acumen. He saw the opportunity in competition and thrived, appreciated the power of connection and made efforts to become friends with people who could help him in his quest to excel and be successful. Alani Yusuf was one of the first mentors he connected to.

The longer he stayed in Mayflower, the more Michael improved academically and grew socially, demonstrating that he had learnt about social cues.

Consider when Oriyomi visited the children. As he stood waiting to board a vehicle, Michael stared at Gbenga and he ran to get their savings to support the father.

Naturally, like a typical African father, “At first, he honourably and tearfully refused, but he eventually realized we would not let him leave without it.”

It was a touching scene. A great moment for reflection. Sadly, it turned out to be the last time they saw their father, Oriyomi, alive.

Chapter 9 started at a fast pace and ran rapidly. It built on the Mayflower tale. Along with chapter 8, it emphasized the discipline and competitive spirit on which the institution was built. It told of the spartan and unorthodox lifestyle of the founders. It provided insight into the dedication, sense of purpose and intellectual prowess of teachers. It also highlighted the importance placed on science and efforts to railroad the best students to the science class.

In chapter 10, the author illustrates how persistence and unwavering faith leads to great possibilities. Despite the fear and anxiety, Michael by dint of hard work emerged one of the school’s representatives in the state quiz competition

The book is many things. It gives a brief, concise and vibrant mini-history lesson of places across Nigeria – Benin, Lagos, Enugu, Sokoto, Sagamu, Ibadan.

The author also sought to compare and contrast the different places and people.

This here is a near picture-perfect example: It was my first out-of-state gig and my first time in Ibadan. As we approached the Ibadan toll gate from the Lagos-Ibadan expressway, I could sense the age of the city. Benin was an even older city, but growing up there, I felt more of its heritage than its age. Waffi, the colloquial pidgin of Edo, was a testament to that contrast. Where Waffi was a blend of English, Portuguese and Bini, the Ibadan dialect bordered on a protest against dilution, against change. It was so distinctly different from the common Yoruba tongue that it drew mockery. Where Benin bustled with youthful energy, Ibadan hummed with patient aggression, bubbling under the surface to be unleashed in curses. Just brilliant!

Another thing is how it brought home the beauty of competition. The preparations, anxieties and triumph of victory or pain of defeat/failure. The possibilities.

The last chapter brought the story home nicely albeit suddenly. It was truly victory at last. It demonstrated that indeed persistence pays, expressing that it pays to follow the process every time. Faith and hope came into play. Michael truly brought Adewale.

All through the book, Yoruba words are used without any translation. It makes one wonder if this would not affect the readability of the book. Of course, it could well be a gimmick by the author to make the reader do some work/ research to find the meaning.

It is, in all, a good read. The author felt the need to explain local words and certain phrases. It is not clear whether it is to appeal to the international audience or strictly for the sake of clarity. Either way, it made it easier to understand.

For Michael and everyone that will read this book, this is only the beginning. Adewale – My Mother’s Son would make for a good biopic. One can imagine big screenwriters flipping through the pages with more than a keen eye and interest.