UNICEF: Two out of 10 Children Exclusively Breastfed in Katsina 59 mins ago

UNICEF: Two out of 10 Children Exclusively Breastfed in Katsina 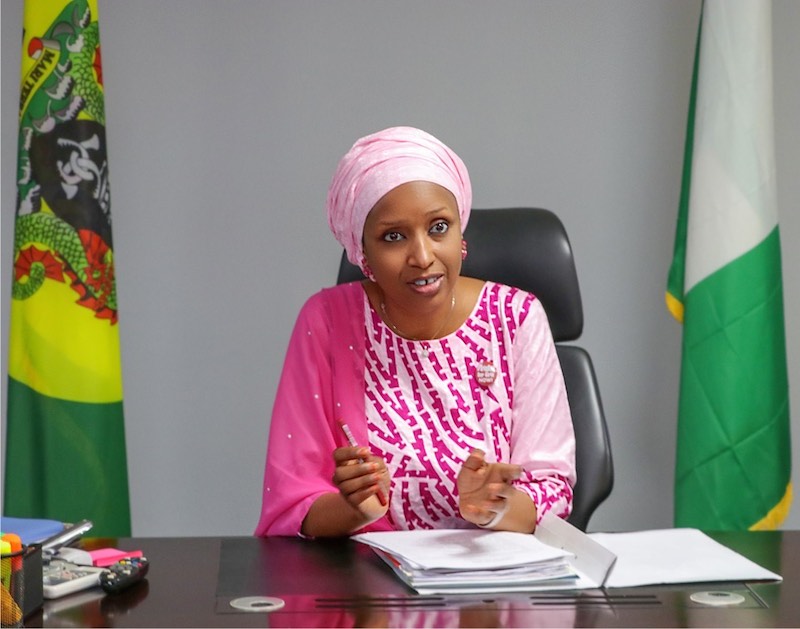 The reappointment of Hadiza Bala Usman as the managing director of the Nigerian Ports Authority would enable her consolidate on giant strides she recorded during her first tenure in office, writes Francis Sardauna

For Hadiza Bala Usman, the Managing Director of the Nigerian Ports Authority (NPA), the recent renewal of her tenure in office by President Muhammadu Buhari came as a welcome idea that would allow her further impetus to consolidate her visible achievements in the maritime sector.

Usman, a political stalwart who was born on January 2, 1976 in Zaria, Kaduna State, is known for her agility in the political terrain. In her first tenure at the ports, she pursued a relentless commitment to the reforms in NPA, which earned her accolades from many Nigerians, including industry operators.

The 45-year-old who has a B.Sc. Business Administration from Ahmadu Bello University (ABU), Zaria and a Post Graduate in Development Studies from University of Leeds, United Kingdom in 2009, was first appointed to pilot the affairs of NPA in July 2016.

She came in as the first female managing director of NPA. Since July 2016, the NPA under her watch, has been going through positive transformations, reforms and repositioning such that its services could well be said to be of international standards and corruption-free.

Five years into the journey of transformation, the Katsina State game changer has been able to prove her mettle by introducing changes through her numerous landmark achievements in the maritime sector.

The NPA, under her, commenced with the launching of Standard Operating Procedures (SOP) and the Port Services Support Portal (PSSP) for efficient and effective operations at the six ports in Nigeria. The rationale behind the launch of the SOP and PSSP was to implement the Corruption Risk Assessment project in ports across the country.

The first-of-its kind initiative, is an anti-corruption project that is focusing on revolving strategies to reduce corruption in the Nigerian ports in order to guarantee the security and safety of people and cargo within the ports and waterways in Nigeria.

The contributions of the NPA to the Consolidated Revenue Fund of the Federal Government of Nigeria has also been unprecedented. From the sum of N18 billion inherited, the current management remitted the sum of N30 billion each for the 2017 and 2018 financial years.

The Usman-led management has also been able to launch the provisional, final billing and customer module of revenue invoice management system that seeks to improve service offering and partner relationship, and also create an efficient payment method. This also allows for revenue maximisation while eliminating losses that are related to revenue leakages.

Her ability to block all revenue leakages and making operations at Nigerian ports seamless and efficient will ensure NPA becomes a key economic driver for the country that is desperate to see a truly diversified economy in an efficiently run and transparent revenue generating system.

To boost marine operations and effective service delivery in the Lagos Pilotage District, the MD of NPA also purchased four new ultramodern tugboats at the whooping cost of N9.15 billion. The boats named MT Majiya, MT Daura, MT Ubima, and MT Uromi, with 60 tonnes of bollard pull capacity, can each be used to tow the new class of ultra-large containerships.

As part of efforts to support President Buhari’s anti-corruption drive, the NPA management under her leadership entrenched transparency and accountability in its operations by signing a Memorandum of Understanding (MoU) with BudgIT Open Budget System Platform.

The memorandum of understanding, which is for the purpose of implementing a programme for dissemination of data from NPA for public consumption, was the first time in the history of the country that an agency of government would go into such an rapprochement.

She equally moved against the $133.28 million Secured Anchorage Area (SAA) deal and APMT over an alleged inefficiency that created congestion at the ports. With these engagements, Hadiza Bala Usman has restored investors’ confidence in the system and force them to adhere strictly to the rule of law while operating their businesses in the country.

The Kaduna born “Uwar Marayu” also introduced new licensing regime that guarantees transparency and strict adherence to due process through review of all concession agreements to ensure collaboration of all stakeholders for development of the maritime industry.

Consequently, the Eastern Ports which had been redundant over the years have recently seen increased vessel activities as a result of concessions made in the reduction of tariffs to encourage vessel owners use the Ports, thereby improving in NPA’s equipment and infrastructure in the areas.

She had even before the executive order, developed a Standard Operating Procedure (SOP), establishing dedicated terminals to handle exports aimed at diversifying the economy and improving earnings in line with the Economic Recovery and Growth Plan (ERGP) of the federal government.

Therefore, all terminal operators have also been mandated to establish dedicated desks that will handle all documentations on export, receipt of consignment and the loading of vessels. However, for a long time, the poor state of the port access roads has continually caused untold hardship to both port users and residents of Apapa.

The current management of NPA signed another MOU with the Federal Ministry of Works and Housing, AG Dangote, and Flour Mills of Nigeria Plc for the reconstruction of the Wharf Road Apapa, to which it went the extral miles to contribute the sum of N1,829 billion to the N4.43 billion venture.

Miffed by the challenge of bureaucratic and chaotic clearance of cargoes, the NPA is in collaboration with Nigeria Customs Service (NCS) and Nigeria Sovereign Investment Authority (NSIA), to develop the operational framework for establishing the National Single Window, Ports Community System and Scanning services.

This, is aimed at simplifying and harmonizing formalities, procedures and the related exchange of information and documents between the various partakers in the port operations value chain. The concerted efforts of Usman to restore investors’ confidence in the Nigerian ports industry has produced remarkable outcomes with the recent signing of a loan agreement of US$629 million by Singaporean conglomerate Tolaram Group and the China Development Bank for the development of the Lekki Deep Seaport project.

In Katsina, her home state, the iron lady has supported the Governor Aminu Bello Masari’s administration in repositioning the education, agriculture and health sectors as well as alleviating the plight of the vulnerable households across the three senatorial zones of the state.

The NPA boss’s humanitarian gestures in the state apparently prompted residents to applaud President Muhammadu Buhari for re-appointing her to spearhead the affairs of the agency for additional five-year tenure.

One of the residents, Bala Abu said the NPA director-general has donated 400 and constructed classrooms at Musawa primary school and also distributed 40 grinding machines to vulnerable women in the local government area.

Abu, who is the state zonal vice chairman of APC said: “Hadiza Bala Usman has done tremendously well in changing the maritime sector and in the area of reducing the hardship been face by rural dwellers in Katsina. So, her reappointment by President Muhammadu Buhari will enable her to do more.

“For instance, in Musawa Local Government, she single-handedly empowered 50 youths with N25,000 each and distributed 40 irrigation machines to dry season farmers to boost their productivity and enhance their economic growth”.

Another resident, Muhammad Danjuma, noted that the reappointment of Hadiza Bala Usman would pave the way for her to continue to pursue vigorously the collection of the Federal Government’s outstanding revenues with the terminal operators.

He explained that the NPA boss had done well in ensuring that outstanding payments and dues meant for the NPA coffers by stakeholders are remitted as quickly as possible, saying providing an enabling environment for efficient Port services in the country remains her cardinal objective.

Danjuma, who is the publisher of an online newspaper, Katsina City News, said: “One good thing about Hadiza is that any responsibility you give her she will do it perfectly with the fear of Allah. Her numerous achievements are out there to see and it is because of her track records that President Buhari reappointed her.

According to him, “she also purchased and installed 282 solar light in Almajiri schools across the 34 local government areas of the state. She distributed 500 chairs to primary schools in Matazu Local Government. She also empowered 30 women with sewing machines and 50 house cleaning materials in the same LGA”.

From the foregoing, it is evidently clear that Hadiza Bala Usman in her five years of stewardship, had successfully set the NPA on the path of actualising its audacious goal of being the leading port in Africa.