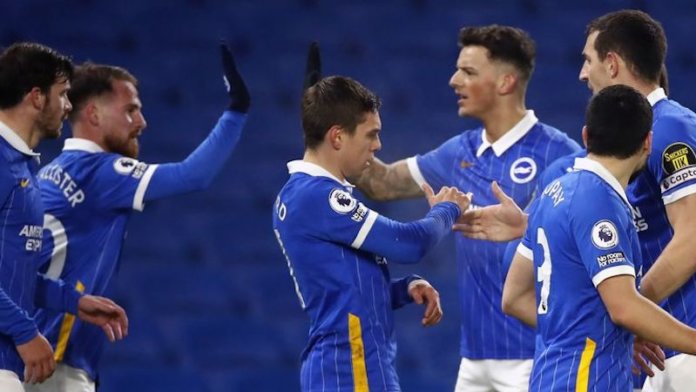 Salah scores brace to help Reds to third on the log

Brighton punished a lacklustre Tottenham to grab their first home league win since June and go seven points clear of the drop.

And the hosts always looked likelier to score the match’s second, with substitute Aaron Connolly having his late effort cleared off the line by Spurs’ Toby Alderweireld.

Jose Mourinho’s side struggled to create chances late on, with defeat meaning they stay sixth, six points off the top four.

Elsewhere yesterday, Mohamed Salah scored for the first time in seven Premier League games with a brilliant double at West Ham United to help Liverpool move up to third in the table.

A trademark quick shift and curling finish from the Egypt striker was reward for a bright start to the second half from the Reds after Jurgen Klopp’s side had failed to add a cutting edge to their first-half possession.

Without the injured Sadio Mane and with Roberto Firmino among the substitutes, the onus was on Salah to end his mini drought and he delivered in style.

Firmino came off the bench to set up Georginio Wijnaldum for a slick Liverpool third before Craig Dawson steered home a corner to hand West Ham a consolation.

Liverpool’s second win in London in four days cut the gap to leaders Manchester City – who have a game in hand – to four points, and the two sides meet at Anfield on Sunday.