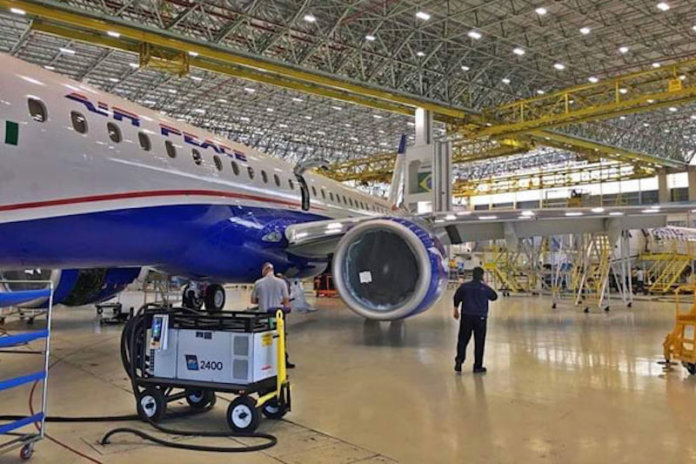 Beyond the celebration, the fanfare and the fact that for over a long time, Nigerian carriers have not acquired brand new aircraft, since Arik Air broke the two-decade old jinx in 2007, the Chief Operating Officer of Air Peace, Mrs. Toyin Olajide explained why the airline chose the new Embraer, E195-E2.

“When you look at the traffic in those destinations, it is not enough for you to actually deploy a big aircraft like our Boeing 737, which is about 136 passenger capacity. If you do that, you will struggle to sustain that route, which is the reason you see a whole lot of those routes have not been explored by the operators in the country because they don’t have the right equipment,” she explained.

The COO noted that for an airline to survive in the aviation industry, it must understand the market it is operating in, adding that that when the airline understands the market, it would know how to deploy the right equipment so that its operation is sustainable and profitable or it would be dead on arrival.

“Now, why have we introduced the E195-E2? The E2 is a brand new aircraft, super efficiency aircraft; it is an aircraft that is for the future and even now, not just for the future. This is because you are going to save a lot of money on the operating cost, you have savings on the fuel and you know fuel cost is very expensive in Nigeria.

“So, those kinds of aircraft coming into the country will be able to help you lower your operating cost. The performance is awesome. We went on the acceptance flight and that was my second time I was flown in the plane.

“I flew it the first time before we actually decided to buy this aircraft. And one of the beauties of this plane is even when you are flying through turbulence you will not feel it because of the advancement of the fly by wire system in the airplane. So, it adjusts itself through turbulence in such a way that you won’t even feel it,” Olajide said.
She explained that in choosing the E195-E2, Air Peace wants Nigerians to enjoy the comfort and beauty offered by the new aircraft, which is adjudged the best in its segment.

“A lot of Nigerians that are scared of travelling, this is the plane for you. Because when you are inside this aircraft you will feel nothing. That peace that we represent, this is the plane that is going to give you the height of it because it is just super.
“The interior is excellent. The staggered seats that we have in the business class are one to die for. Not just that, even in the business class, there is an innovation with the table that the passengers use, it has an ipad holder.

“So, when you are even sitting on the plane, you don’t even need to be holding your Ipad, you can actually just clip it to the table and then you work. This is the first in the industry; no other aircraft in the industry has this kind of innovation. So, it’s an awesome aircraft.

“It is also an aircraft that is able to land even on a very short runway. Like in some airports where the Boeing 737 cannot go to, for instance, like NAF base in Port Harcourt, the B737 can’t land there. Even, our ERJ 145, if we have a full load on it, it cannot land in the NAF base but this plane can land there with 124 passengers. Those are part of the improved performance on this plane and that is the reason we went for it,” Olajide said.

Embraer’s President and CEO, Francisco Gomes Neto described the new aircraft type acquired by Air Peace thus, “The E2s are really fantastic airplanes. Your engineering people are going to love the technology. Your crews are going to love flying them.

“Your accountants are going to love the operating economics. And your passengers are going to love the stunning interior, especially those sitting in business class with the staggered seat layout. That innovation is an industry first, and we’re so pleased that Air Peace will showcase it to the world and, of course, that you’re the first airline in Africa to fly an E-Jet E2.”