Amosun: A Quintessential Enigma at 63 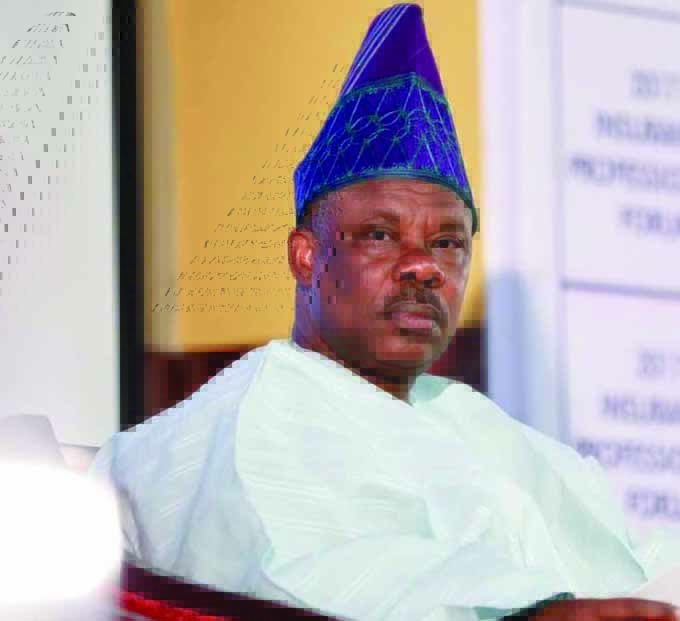 Ogun, the Gateway State has been lucky to have scored first in many areas of human endeavours to the admiration of many and to the chagrin of a few. In fact, it has been called the state of giants by great intellectuals on account of the contributions of its indigenes to socio-political and economic development of Nigeria, Africa and the World at large. Ogun has produced giants in law, accounting, sports, science, literary and arts as well as politics.

It is therefore not surprising, that the state is gifted with another giant who is not only an embodiment of the tradition of excellence that Ogun is known for, but also combines energy, zeal and creativity that are uncommon. Senator Ibikunle Amosun (SIA) is the definition of a home made brand who is proudly “Egba” and truly global in his orientation. He didn’t only rise to the pinnacles of his professional career, he has also done exceedingly well in political space leaving indelible marks in the hearts of the people with his role in the making of modern Ogun State.

A Master of Arts holder in International Finance from the University of Westminster in London, United Kingdom, Amosun’s knack for prudence is second to none. This was fabulously employed in the management of the resources of Ogun State during his tenure as the Governor between 2011 and 2019.

His knowledge, as a fellow of both the Institute of Chartered Accountants of Nigeria (ICAN) and the Chartered Institute of Taxation of Nigeria, was brought to bear when he increased the internally generated revenue of the state from N700 million to N7billion monthly before he left office as Governor in 2019.

He left no one in doubt as to his preference for an egalitarian society when he presented a pro-people manifesto and ran for Senate in 2003 defeating established politicians to represent the good people of Ogun Central in the National Assembly. He didn’t just become popular overnight winning a Senate seat. He had engaged in philanthropic works sponsoring students’ education, helping businesses and footing hospital expenses for the less privileged. He was a man who gave back to the community. He started giving scholarships to students as far back as 1986. He hasn’t stopped doing all these till date.

Born on January 25, 1958 at Totoro Abeokuta; his father Alhaji Abdulazeez Oyedeni Alade Sanusi was a Railway worker while his mother Alhaja Rafatu Mojisola Alake Sanusi was into petty trading. Both parents died in 1997 and 1999 respectively. Young Ibikunle Amosun took more than passive interest in buying and selling helping his mum in her trading. This would later manifest in his adult life.

The first problem confronted by SIA when he took over as Governor in 2011 was insecurity as well as lack of funds. In fact, banks couldn’t open in some areas of the state as a result of the activities of hoodlums and armed robbers. Within weeks, Amosun set up Security Trust Fund (STF) headed by Mr. Kayode Are former Director-General of Department State Security (DSS). He procured 125 double cabin patrol vans operational vehicles fitted with sophisticated communication gadgets that facilitated easy communication for security operatives. His administration later acquired 14 Armoured Personnel Carriers (APC). These actions reduced insecurity greatly in the state.

Amosun believed that if insecurity was taken care of, economic prosperity would naturally follow and the citizens would be better for it. In 2011 when he took over, Ogun State was rated as number 35 on the scale of ease of doing business by the World Bank. Three years later, in 2014 the state moved to number four, thanks to the ingenuity of the administration of SIA. Over 300 industries were attracted into Ogun State with 148 of them investing over $200 million. Unilever alone has created over 7,500 direct jobs with multiple indirect jobs. According to Nigeria Bureau of Statistics, 75% of foreign direct investments in the country streamed into Ogun State under his watch!

The journey to the new era in Ogun State was mid-wifed by Amosun’s Mission to Rebuild Ogun State (MITROS) with an unassailable momentum which led to the epoch-making infrastructural revolution in the state. Within a short time, the state capital witnessed an uncommon transformation from its hitherto backwater status into a modern city centre and a metropolis of some uniqueness. During his time, the World also witnessed rice revolution in Ogun State with Mitros Sawonjo rice and Mitros Ofada rice defining the next stage of rice production in Nigeria.

Ajiri Omo Oye, as fondly called by his immediate family members and close associates, loves to project the image of Nigeria, its culture and the central roles expected of it as the most populous Black Nation. His desire to unite Africans all over the World through celebration of the beauties of African Drums brought about African Drum Festival. It was in the quest to correctly situate the place of the African Drum as part of the larger agenda of cultural renaissance that made SIA create African Drum Festival.

The annual cultural show-piece usually features diverse genre of cultural exhibitions which convey the artistic uniqueness of the traditions of African societies. No fewer than 14 countries participated in the fourth edition of the festival in April 2019 which featured over 70 groups across the world including groups from the Caribbean. Cultural artists from 24 states of the 36 states in Nigeria competed for honour at the events with Kwara State emerging first while Enugu state and the host state Ogun emerged in second and third positions respectively.

Amosun has an uncommon energy pursuing anything he believes in. He would remain on sites till late in the night making sure works are done to the specifications which he named “Ogun standard”. He doesn’t believe anything is impossible through hard work and prayers. He would go any length assisting and encouraging Ogun indigenes achieve their aims. He was in Cardiff to give support to Anthony Joshua, Ogun-born boxer who is the World Heavyweight Champion when the latter was defending his title. I witnessed him give moral support to his wife, Dr. Olufunso Amosun, at Ile Ife three years ago when she was honoured with Moremi status by Ooni of Ife, HRM Oba Enitan Ogunwusi.

As our own Ajiri turns 63, all I can wish him is more energy, good health and wisdom to continue his service to his fatherland. I propose 63 hearty cheers to the distinguished Chairman, Senate Committee on Capital market.