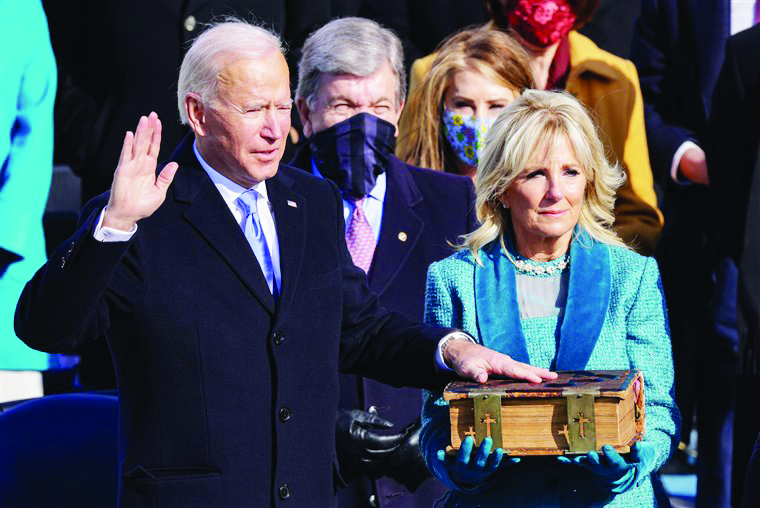 From the plethora of challenges inherited, President Joseph Biden already has his work cut out for him. Shola Oyeyipo writes

America, Americans, and many nations across the globe are still experiencing what could be rightly described as Post Trump Traumatic Distress (PTTD). During his four years reign as the president and towards the tail end of his administration, the immediate past president of the United States, Donald Trump left many in a state of perpetual amusement and shock by his actions and inactions.

He eventually bequeathed to his successor, President Joseph Biden, a nation plagued by division as never seen in the modern history of the country. Thanks to the outgone president, who freely peddled unsubstantiated claims of electoral fraud, stoked the embers of white supremacy and galvanised his supporters into insurgents, who disgracefully attacked the US congress with their phantom agenda to upturn Biden’s electoral victory.

That was perhaps the last straw that broke the back of his camel as some of his die-hard supporters like the former Senate Majority Leader, Mitch McConnell, Linsdey Graham, and a host of others, dumped him.

Though Trump is now out of the way, it is right to say he already dictated what Biden must urgently address given the ‘legacy’ he left behind. The new president is not oblivious of those burning issues. He enumerated them in his acceptance speech, when he said tackling the Coronavirus pandemic will be his top priority.

But while everyone will agree that the respiratory disease which has claimed over 400, 000 American lives must catch the president’s attention; restoring unity, is of equal, if not greater importance and urgency.

Trump effectively polarised America through party politics and instigation of racial disharmony by raising a crop of disciples, who agreed strongly with his disinformation. Though several courts have thrown out cases that challenged Biden’s electoral victory for lack of evidence of fraud, they share his view that it was stolen.
Trump’s believers also felt that it was unnecessary to wear a facemask to prevent the spread of COVID 19. They held events with the crowd and flagrantly ignored the Center for Diseases Control (CDC) mask mandate, thereby helping to further spread the virus.

Presently, America seems to be in a war situation. While COVID-19 claims an average of 3, 054 lives daily, the activities of the Trump-insurgents are akin to domestic terrorism. So, President Biden cannot afford the disaster already raised for him by Trump. He must make frantic efforts to get those people in line behind himself as the nation moves to wage war against the raging virus.

He must be commended though as he has continued to preach peace and unity and has vowed to be president to everybody, either they supported him or not. If the Trump supporters are not recalcitrant and they embrace peace, very easily the country will move past the disunity entrenched by the last administration.

Arguably, Biden is already putting in place stringent measures to stop the negative effects of COVID-19 on Americans. He signed 10 executive orders to expand testing and make the vaccines more available. The agenda to administer 100 million vaccine doses by the end of April, the invocation of the Defence Production Act as a way to ensure that federal agencies and manufacturers increase important supplies needed to combat the pandemic, and the implementation of fresh travel restrictions to curb the spread of the disease are right steps in the right direction.

President Biden, in the cover letter of his ‘National Strategy for the COVID-19 Response and Pandemic Preparedness’ released Thursday, wrote that: “It is a comprehensive plan that starts with restoring public trust and mounting an aggressive, safe, and effective vaccination campaign. It continues with the steps we know that stop the spread like expanded masking, testing, and social distancing.

“It’s a plan, where the federal government works with states, cities, tribal communities, and private industry to increase supply and administer testing and the vaccines that will help reopen schools and businesses safely. Equity will also be central to our strategy so that the communities and people being disproportionately infected and killed by the pandemic receive the care they need and deserve.”

This however goes back to the issue of unity, because good as Biden’s plans are, they are subject to congressional approval. If Congress refuses to pass the administration’s $1.9 trillion proposed for Coronavirus relief, Americans might continue to die.

Another very important reason the Biden $1.9 trillion recovery plan must see the light of the day is because the US economy is in a pretty bad shape and this is better underscored by the fact that about 16 million people are receiving unemployment benefit from the government as of January 2 and the number is expected to keep growing. So, the president and his team have a lot of work to do on the economy. Some analysts have suggested that it could take up to 2023 before the US economy comes back on track.

While he would be working on the economy, securing the country from a threat from within is another big job before President Biden. The president specified these aspects of threat in his inaugural speech. He ideentified “political extremism, white supremacy and domestic terrorism.”

From every indication, President Biden is familiar with the challenges confronting his government. He noted further that, “Few periods in our nation’s history have been more challenging or difficult than the one we’re in now. A once-in-a-century virus silently stalks the country. It’s taken as many lives in one year as America lost in all of World War II. Millions of jobs have been lost.

“Hundreds of thousands of businesses closed. A cry for racial justice some 400 years in the making moves us. The dream of justice for all will be deferred no longer. A cry for survival comes from the planet itself. A cry that can’t be any more desperate or any more clear. And now, a rise in political extremism, white supremacy, domestic terrorism that we must confront, and we will defeat.”
Definitely, all eyes are on President Biden as expectations are high. Above all, history beckons on him to write his name on the sand of time and in gold.