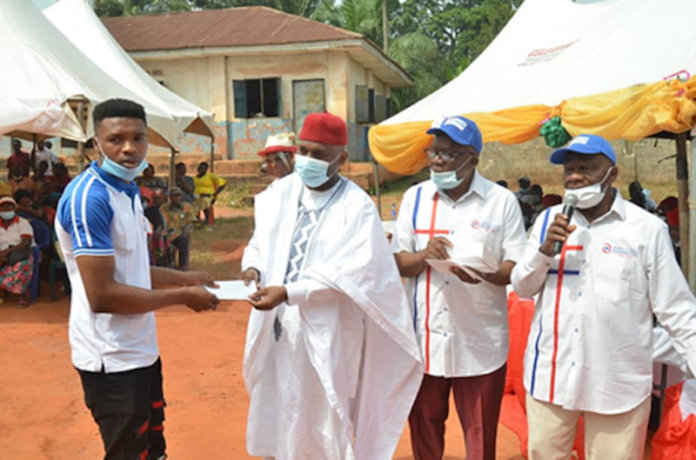 The English dictionary defines Foundation as a donation or legacy appropriated to support a charitable institution, and constituting a permanent fund, endowment for deeds of charity. Some famous international Foundation include Ford Foundation, Mac Arthur Foundation and Melinda Gates Foundation, all based in the United States of America.

Here in Nigeria we have some reputed Foundations which donate substantial sums of money to many noble causes aimed at assisting the needy, supporting education or other societal development needs. Some of these include T.Y Danjuma Foundation,Sir Emeka Offor Foundation and the one sponsored by Chief Tony Elumelu.

In Anambra State a number of public spirited individuals, philanthropists and even politicians have established Foundations and Medical Outreaches which attend to various medical needs of thousands of people on fairly regular basis. The well-established ones are those by Senator I.G Abana, Hon Dozie Nwankwo and Hon Chris Azubogu.

However the most comprehensive, impactful and far reaching in terms of scope consistency and financial backing is the Senator I.G Abana Foundation (SIGAF) which marked its 10th year of activities in December 2020. Endowed on December 27 2010 by Senator Ikechukwu Godson Abana, a businessman and politician who had a stint in the Nigerian Senate between 2003 and 2005, the Foundation has become a household word in Njikoka Local Government Area in particular and Anambra State generally as a result of its positive impact on the health and wellbeing of the women, the youths and the elderly as well as the educational development and economic empowerment of the inhabitants in the area.

It has been 10 years of the Foundation living up to the tenets of its motto,’ Touching Lives Positively’. Members of the Board of Trustees of the Foundation include Senator Abana himself Chairman, Sir IK.N Abana, Evangelist Dr. Gloria Uchefuna and my humble self- Sam Ekpe. I am therefore in a very good position to assert and confirm from practical experience that Senator I.G Abana Foundation has moved Enugwu Ukwu community and beyond forward sand has far achieved the aims and objectives of its establishment. The vision of the Founder is encapsulated in the Foundation’s 6- Points agenda which are scholarship scheme for indigent but intelligent secondary school and university students, financial empowerment for small scale entrepreneurs, particularly women, free medical health services for the sick, special health intervention scheme for patients with terminal health conditions, food assistance to the very poor and establishment of Centre for the Elderly for their good health, maintenance and welfare.

Since its inception in 2010 the Foundation has sponsored over 73 students through university education each of whom was paid one hundred thousand naira (N 100,000) per semester for tuition and assistance for upkeep. More than 50 of these beneficiaries have graduated from their various institutions and a number of them secured employment in some organizations including banks. 18 of the students are still undergoing their studies while more will become beneficiaries of the scholarship scheme of the Foundation after going through a transparent process of recommendations and confirmations by the executives of their various villages that they are truly indigent and have no one in their families capable of paying their school fees. The eventual beneficiaries are also expected to obtain minimum pass grade in a qualifying test. They are also expected to submit copies of letters of admission to the universities for various courses of study. Similarly over 117 beneficiaries of the scholarship scheme have passed through secondary school, each of whom has paid N 35,000 per term. More students are still enrolling and becoming beneficiaries.

The Foundation through the women wing of Enugwu Ukwu Community Development Union (ECDU) gave a revolving grant of N1.5 million to assist small scale business women embark on various trades. As the beneficiaries utilize and return the loans more funds are given to their leaders to assist more people. Every December, for two days since 2010, the Foundation embarks on a Medical Outreach in Enugwu Ukwu where 12 medical doctors, 12 nurses, pharmacists and laboratory attendants are employed to attend to the health needs of the people free of charge. More than 15,000 persons have benefited from this free medication and eye glasses. The 10th Anniversary Outreach was done on 28th and 29th December 2020 and witnessed more patients at the clinics.

The Foundation, in its belief that every human being created by God should be given an opportunity to enjoy his or her life well beyond the biblical three score and ten (70) years, established a Centre for the Elderly where senior citizens of 70 years and above are given medical attention and provided food and healthy drinks in a canteen at half of the normal costs.

The Centre operates a free medical clinic with a medical doctor and two nurses attending to the 70’s and above every Saturday throughout the year where they are given medications free of charge. The Centre has indoor facilities, cable television network and other items of entertainment to keep the brains and intellect of the aged active. The membership of the Centre has risen to over 150 in the past 10 years and as more people attain 70 years of age they join the club.

Under the Health interventions Scheme the Foundation provides palliative funds to patients whose illnesses have been diagnosed as terminal, to enable them purchase drugs and sustain themselves. Over 50 patients have so far benefitted from this scheme. In the Foodstuff Assistance Scheme, the Foundation provides foodstuff and cash to the very poor in the society during festive periods to enable them have feed of the seasons.

The Foundation introduced special youth empowerment scheme in the 2020 outreach. This is in a bid to attend to the segment of the youths that did not pursue education, in order to emphasize their while Education is the key to success in life; it is not the only means to a good life. Those who are not privileged or do not have the capacity or capabilities to go through tertiary education can still succeed in life through their acquiring various skills and trades. The Foundation bought dryers, spray painting machines, sewing machines and various other equipment of various trades along with electricity generating sets and distributed to some youths selected by the executives the Enugwu Ukwu Youth Council (EYC). This programme will be a permanent feature of the Foundation’s activities in order to keep some of our youths off idleness, prostitution and drug abuse and its negative effects on our society.

Outside our immediate environment the Senator Abana Foundation has embarked on Community Social Responsibility (CSR) on a number of occasions. For instance in 2015 the Foundation made mouthwatering donations of food and non-food items including huge volume of cash to the internally displaced people in war ravaged Yobe state. In 2012 the Foundation donated various hospital equipment including beds, GDA cupboards, wheel stretchers, drug cabinets, big and small fold away stretchers and iron tables to the Government of Anambra State. Receiving the items the then Governor of Anambra state, Mr. Peter Obi who personally attended previous medical outreaches of the Foundation acknowledged Senator Abana as an exemplary Anambra State philanthropist whose noble deeds of charity were worthy of emulation by the good people of Anambra State whom God had blessed with wealth and fortune.

The Foundation spent millions of naira to sponsor holiday classes in Enugwu Ukwu in 2019 during the long vacation and also donated huge volume various food items and cash to various groups in Enugwu Ukwu as palliative measures during the covid-19 lockdown in 2020. The Foundation also sponsored the perimeter fencing of Uruekwo primary school Enugwu Ukwu. These noble deeds and acts of charity are outside donations of cars, buildings and cash and other items to various individuals and the church which Senator Abaca has been giving out, most of the time unannounced.

The Foundation marked its 10th anniversary on 28th December 2020 in Enugwu Ukwu with some pomp. Attended by His Majesty Sir Ralph Obunneme Ekpeh, Eze Enugwu Ukwu na Igwe Umunri and some members of his cabinet including Architect Donald Nwandu the former Regent of Enugwu Ukwu and Ezeudo Dr. Uche Nworah the Managing Director of Anambra Broadcasting Service (ABS), the good people of Enugwu Ukwu used the occasion to appreciate all the goodies the town had experienced through Senator Abana’s benevolence.

The Igwe and the Deputy Governor of Anambra State His Excellency Dr Nkem Okeke extolled the sterling qualities of the benefactor and prayed God to continue to bless him as he devotes his resources for the benefits of mankind and the society. Other speakers at the occasion include Chief Dennis Anekwe the Traditional Prime Minister of Enugwu Ukwu who had also established Dengox Foundation following the footsteps of Senator Abana, his deputy Chief Clem Nwafor Odu Nkataukwu who was the Chairman of the occasion, Hon Dozie Nwankwo, Member of House of Representatives representing Njikoka, Anaocha and Dunukofia local government areas and other top personalities in the community.

Highlights of the celebration were presentations of certificates of commendation to Igwe Ralph Ekpeh and Dr Nkem Okeke for their consistent support for the Foundation by their personal attendance at all the outreaches of the Foundation in the past 10 years. Long Service Awards were also presented to doctors, nurses and pharmacists as well the three Foundation members of the Board of Trustees of the Foundation, Sir IK.N Abana, Mr. Sam Ekpe and Evangelist Gloria Uchefuna for their dedicated services to the Foundation since 2010.

In his closing remarks, Senator Abana reiterated what he called his covenant with God that as long as He keeps him alive and continues to bless him, he Senator Abana will continue to put smiles on the faces of the people.

The unique and significant feature of the Senator I.G. Abana Foundation (SIGAF) is that the Foundation does not accept donations or contributions of any kind but is solely sponsored by its Founder and Chairman Senator Ikechukwu Godson Abana.

If there is any personal Foundation, registered and audited by Government established for non-profit but substantially fulfilling its objectives of uplifting humanity and qualifies for national and international award and accomplishments, Senator Ikechukwu Godson Abana (SIGAF) should stand up and be counted.
––Sam Ekpe is a Media and Public Relations Consultant based in Abuja.