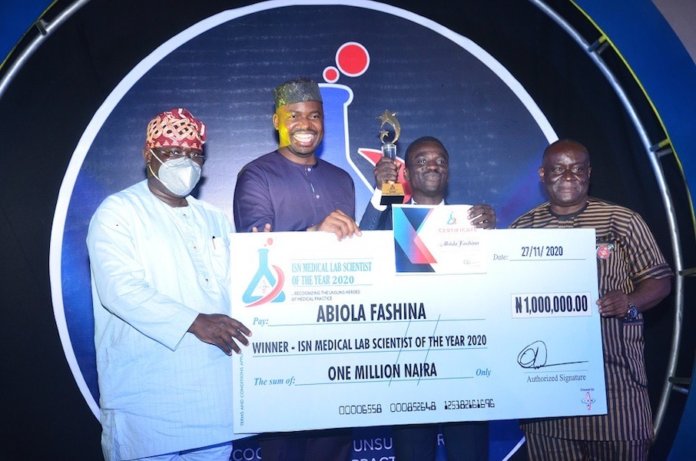 Raheem Akingbolu writes that the maiden edition of the ISN Medical Laboratory Scientist of the Year Award instituted to recognise and reward medical laboratory scientists, who are the unsung heroes of medical practice in Nigeria, will encourage excellence and commitment among practitioners thus impacting the health sector greatly

Often times, critics complain that rewarding institutions for awards in both public and private sectors in Nigeria hardly get their priority right.

Even when these institutions chose to do the right thing by focusing their attention on critical areas or sectors that need to be supported, only the seemingly so-called respected professions in that sector get the desired recognition leaving others whose contributions are as critical as those of the former behind.

This is the situation that aptly describes what medical laboratory scientists go through in medical practice in Nigeria despite their immense role in the delivery of health care.

But on Friday, November 27, 2020, ISN Products Nigeria Ltd took a remarkable path by rewarding medical laboratory scientists for their contribution to medical practice in Nigeria.

At a well-attended event, held at Federal Palace Hotel, Victoria Island, Lagos, ISN, a leading supplier of medical diagnostic products and services in Nigeria, bestowed on Abiola Fashina, the coveted award of ISN Medical Laboratory Scientist of the Year.

Fashina, a medical laboratory scientist who works at the University of Lagos Medical Centre, won the maiden edition of the award for his diligent contribution to the field of medical sciences.

In an earlier statement issued by the company to announce the award, the organisers had stated that the award was instituted to recognise and reward the unsung heroes (Medical Laboratory Scientists) of medical practice in Nigeria.

ISN Products Nigeria Ltd, the convener of the award, is the leading supplier of medical diagnostic products and services in Nigeria and has been in operation for over three decades.

For emerging the winner of the inaugural edition of the award, Fashina would receive a cash prize of N1 million, a Capacity Development Training, and a donation of Medical Lab Equipment/Reagents worth N1 million to the laboratory or hospital where he works.

Speaking on behalf of the Minister of state for Health, Dr Olorunnimbe Mamora, the Chief Executive Officer of Federal Medical Centre, Ebute-Meta, Dr Adedamola Dada, commended the company for instituting such a noble initiative and also appreciated the contribution of medical laboratory scientists who have continued to be a strong component of the health care system in Nigeria.

“We are indeed happy that ISN has taken it upon itself to recognise excellence among these subsets of health workers. We are equally pleased with the detailed effort and process used in arriving at the winner,” Mamora said.

He urged the top finalists including the winner to see their emergence as an opportunity to contribute more in advancing the quality of medical laboratory science practice in Nigeria.

In his welcome address, the Executive Director of ISN Products Nigeria Limited, Mr Felix Ofungwu, noted that the award was part of efforts by the company to contribute its quota in promoting and rewarding excellence among medical laboratory scientists for their active role in the health sector.

According to Ofungwu, the place of medical laboratory scientists in the health care sector could not have been more significant given their contribution to saving lives amidst the rampaging effect of COVID-19 in Nigeria.

“For us at ISN, we believe that proper and adequate care is only as good as the accuracy of the diagnosis that the patient receives and the responsibility of that diagnosis is largely borne by the medical laboratory scientists,” he added.

In his goodwill message, the President, Medical Laboratory Science Council of Nigeria (MLSCN), Mr Tosan Erhabor equally lauded the company for leading the charge to celebrate the unsung heroes of the health sector through this initiative.

“The vision of ISN is in tandem with what MLSCN stands for and the reward for the award itself lends credence to the company’s commitment to quality laboratory service in Nigeria.

Speaking shortly after being announced the winner of the maiden edition of the award, Fashina applauded the management of the company for its commitment to quality medical science practice which, he said has been demonstrated through the recognition given to practitioners via the initiative.

He further charged other laboratory scientists to keep working hard and ensuring a quality standard of practice.