Masari Grants Clemency to Six Convicts in Katsina 7 mins ago 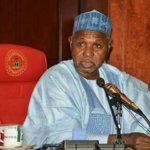 The Southern Kaduna Peoples Union (SOKAPU), has declared that more than 160,000 people across 143 communities in the Southern part of Kaduna State have been displaced by bandits.

The President of the SOKAPU, Mr. Jonathan Asake, who addressed a press conference in Kaduna yesterday, said that more than N900 million was paid to kidnappers as ransom from January to December, 2020, adding that those who could not pay ransom were killed.

Asake said that those who are displaced are mostly women and children, who are currently living under very harsh and dehumanising conditions.

He expressed concern over the spate of insecurity that has engulfed the country, noting that Nigeria is undergoing severe security challenges as the Boko Haram terrorists, bandits and other criminal elements continued to unleash terror on people.

The incessant kidnappings, massacre and displacement of indigenous people from their homes, according to him, have continued unabated.

Asake said: “Presently, in most of our communities across the 12 local governments in the Southern Kaduna, there are reported cases of daily abductions on the road, farms, homes, markets and worship centres where victims have gone through unimaginable torture and relations forced to pay outrageous sums of money as ransom.

“As I address you today, no fewer than 143 communities across our local government areas in Southern Kaduna have been completely displaced, with over 160,000 persons, mostly women and children, now living under very harsh and dehumanising conditions devoid of food, medication and other necessities of life.

“From reports of kidnappings available to us and the amount of money paid in ransom, our poor, vulnerable and defenceless people in Southern Kaduna have had to cough out over N900 million from January to December 2020 in ransom to these heartless criminals, with many killed when relatives of victims are unable to raise the ransom and at times even when ransom has been paid.”

He lamented that the state and the federal governments appeared helpless and lacked the capacity to tackle the criminals.

He said: “It is against this backdrop that the Christmas homily by the Catholic Bishop of the Sokoto Diocese, Dr. Matthew Hassan Kukah, serves a timely wake-up call on national leadership to confront the monsters of destruction that are committed to the annihilation of our communities.

“This is not the first time patriotic citizens and statesmen have raised their voices of concern to draw the attention of our leaders to the need of confronting these security challenges that seek to destroy our nation which appears to have always fallen on deaf ears.”

He recalled that a former Defence Minister, Gen. Theophillus Danjuma (rtd), and former Deputy Governor of the Central Bank of Nigeria (CBN), Dr. Obadiah Mailafia, had raised similar concerns about the incessant killings across communities in Nigeria, particularly in the Middle Belt Region, but were roundly condemned by a section of the country.

Asake defended Danjuma’s called for self-defence as a constitutional right of every citizen, but regretted that the call was perceived negatively by a section of “this country which has continued to behave as if they owned Nigeria and other citizens have no right to criticise the administration of President Muhammadu Buhari.

“It appears to us, therefore, that comments by Nigerians attract different reactions from the government, depending on the region, ethnicity and religion of the person making such comments.

“It is sad to note that when persons from the core Northern extraction criticise government; they are taken as kind words, but when the same statements are made by people of Southern or Middle Belt extraction, they are harassed and tormented and their comments branded as treasonable by government.”

He also maintained that “this discriminatory posture of government clearly shows that the Buhari-led administration treats Nigerian citizens differently; some as first class and others considered as second class.

“If this is not the case, how can one explain a situation where the same comments made by Dr. Mailafia attracted ceaseless harassment by security personnel while a similar comments by the Acting Deputy National Publicity Secretary of the All Progressives Congress (APC), did not attract the same reaction.

“Again, when the respected Bishop Kukah criticised the government in his Christmas homily, all hell broke loose from Northern elements who have consistently exhibited intolerance since the emergence of Buhari as the President.

“Despite the fact that some who came hard on the Bishop had made statements against the government in a more critical manner,” Asake said.

He said that it became clear from the debate that trailed the Kukah’s Christmas homily that “all the while some have arrogated to themselves the right to criticise President Buhari-led government, while others are denied the same right.

“More worrisome is the fact that the core North has consistently exhibited to the rest of the country that Buhari is a president for a particular region and religion, and not for the entire country.

“Sadly so, his glaring nepotism, chauvinism and bigotry in his governance style seem to lend credence to this perception.

“We note that the Sultan of Sokoto, prominent emirs and the Northern Elders’ Forum (NEF) had condemned President Buhari over his dismal performance in tackling insecurity in the country, with NEF calling on him to resign.

“The anger and threats that are being issued against the revered Bishop was never served on the Sultan, emirs and NEF which clearly shows the discriminatory posture of this government.”

Asake declared that the SOKAPU stands with Bishop Kukah and others who before him had called attention to the subtle and continuing annihilation of our communities.

“The people of Southern Kaduna have continued to bear the pains of discriminatory practices aimed at diminishing our status as Nigerian citizens. In the light of these grievous infractions on our rights, we have taken solace that just as the dawn follows the night, this present darkness of hopelessness that is enveloping our nation will soon fizzle out…,” Asake said.

He also called for the arrest and prosecution of those who are threatening the bishop, and warned “the Islamic group that issued a threat and an ultimatum to the bishop that nobody has a monopoly of violence and nothing should happen to Bishop Kukah.”