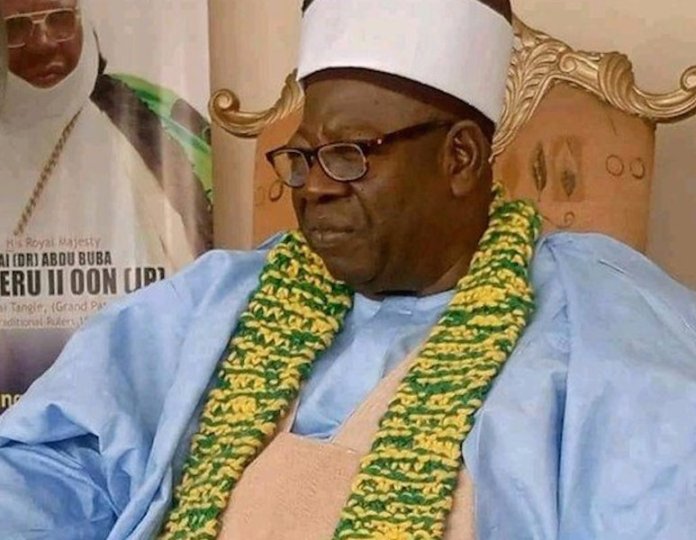 The cold hands of death on Sunday, 10th January 2021, crept in and took the life of HRH. Dr. Abdu Buba Maisharo II who was the 15th Mai Tangle of Biliri, Gombe State.
The vast majority of us and the late Mai Tangle’s acquaintances will attest to the fact that he was a peaceful, humble, compassionate and kind-hearted crowned head. He was indeed a revered monarch who loved his subjects with all his heart. This legend will be cherished and his legacy will play on the stage of many generations yet unborn.

His quest for peace and unity in cultural diversity enamoured him to form the “Pissi Tangale” which is translated in English as “Tangale Day”. Since its inception, Pissi Day continues to enhance and promote the unity in diversity amongst the clans and dialects of the Tangale people thereby boosting the cultural image and cohesion of his kingdom. This singular act, out of his numerous achievements will not be truncated because of his demise but his legacies will endure and stand the test of time because of the wheel of sustainability that he ensured was put in place when the Mai Tangle was alive.

The commitment of the late monarch to peace, unity and tolerance earned him numerous awards notably the “Gombe State for Maintenance of Peace and Security Awards” in 2004.

His service and dedication to God, the body of Christ and humanity, made the Bible Society of Nigeria honour him with Life-Long Service Certificate of 20 years service, from 1979-99. ECWA Church Ashaka also awarded him the Certificate of Appreciation as her adviser for six years (1995-2001). He was also awarded a Certificate of Philanthropic Service by ECWA Bayara LCB, Bauchi in 2003, amongst many others.
His enviable profile was included in the publication of Contemporary Who’s Who by American Biographical Institute, 2004. HRH ascended the throne of his ancestors when he was presented with a Second Class Staff of Office in 2002; in that exalted position he became the third highest traditional ruler in Gombe State. He bagged a doctorate degree in Canonical Law (Honoris causa) by Pan-African Christian Theological University Inc, Abuja. He also attended the Institute of Management and Technology, Enugu, 2004.

Consequently, he was made the Chairman, Council of all Christian Monarchs in Nigeria, a position which he used to prove his exceptional leadership qualities by bridging the gap of discord and disunity in the circle of Christian monarchs in the North and Nigeria at large.

HRH. Dr Abdu Buba Maisharo II was a dogged fighter, a loving father, Christ Ambassador and peace advocate. He will be fondly remembered as a monarch who fought the good fight, who finished the race and who kept his faith.

While we mourn his death, we must also remember HRH would want us all to move on with our lives. As Lancelot said, “If the legends are true maybe someday we will be greeted with their greatness once more.” Therefore, let’s mourn with the hope that a seed shall raise from his throne who will be greater than his father.
––Samson Kefas Galadima, Gombe