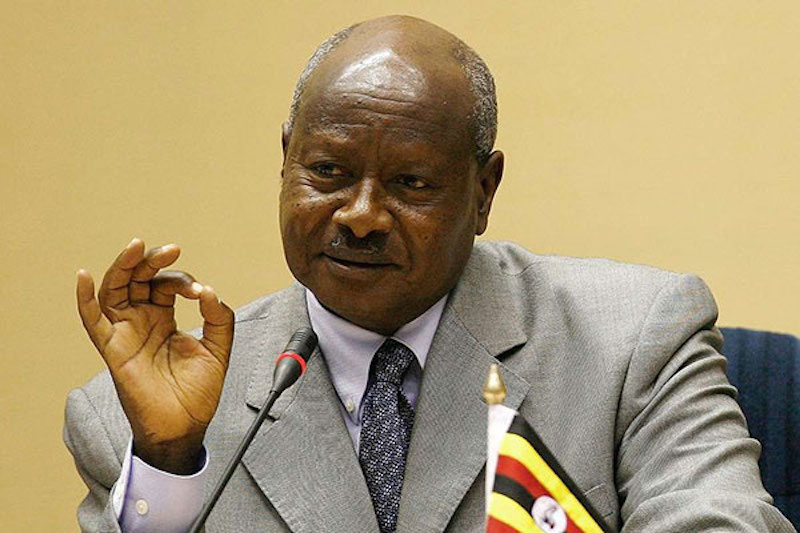 After repressing the opposition during an election many believed was unfairly conducted, Ugandan Electoral Commission has declared President Yoweri Museveni re-elected for a sixth term.

Wine, a reggae star and actor turned political opposition leader says he is under house arrest with security agents surrounding his residence as the electoral commission declares Museveni re-elected.
Wine, 38, came second with less than 35 percent of the votes.
After rejecting the electoral process as fraudulent, Wine had last Friday declared himself winner of the election.

On Saturday, he said soldiers had surrounded and blocked access to his house.
Wine said on Friday he had video proof of voting fraud and would share the videos as soon as internet connections were restored. He accused Museveni of fabricating the results and called the poll “the most fraudulent election in the history of Uganda”.
Wine’s representative Benjamin Katana described the announcement as “an attempt to undermine the will of the people in Uganda”.

He said: “The legal framework in Uganda gives us a number of opportunities and options to which we can contest this unfair process and going through the Supreme Court is one of the options.
“We ask the people of Uganda to stand firm and work with us to explore all the options … to make sure that we stop this coup.”

Under Ugandan law, the burden of proof rested with Bobi Wine.
The commission has deflected questions about how countywide voting results were transmitted during the internet blackout by saying “we designed our own system.” It could not explain how it worked.
“The entire process has been conducted in the dark and it lacks transparency,” Benjamin Katana, head agent of Bobi Wine’s National Unity Platform said.

“From the beginning, we were assured by the electoral commission that each candidate or their agents will receive copies of the results from the districts before they are transmitted to the national tally centre, so we are able to verify when they are reading here – and that was not done”, he added.

On the eve of the vote, Museveni’s government, which is notorious for its intolerance of opposition and human rights violations, cut off access to the internet and social media in the East African country fueling insinuation that the election would.not be free and fair.
With the death of Robert Mugabes (Zimbabwe) and Mobutu Sese Seko (Congo DRC), Museveni still represents the surviving league of Africa’s sit-tight leaders.

There are also presidents Paul Biya of Cameroon and Teodoro Nguema Mbasogo of Equatorial Guinea.
A new and dangerous method for tenure elongation in Africa is third-term syndrome, involving the indiscriminate change of national constitutions, often resulting in violent conflicts, disputed elections and general political instability.

Many are of the views that Wine has shown that youths can revolutionize the political ecosystem in a continent where leadership is blighted by corruption, cronyism, bad governance and marginalization of minorities, particularly youths and women.