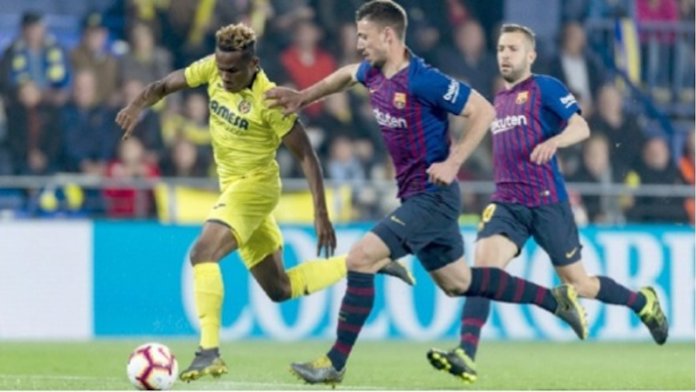 When Samuel Chukwueze joined Spanish side, Villarreal in 2017,` very few doubted his ability to perform at the highest level. What many did not however envisaged was the ability of the Yellow Submarine to be able to retain his services considering his continuous link away from the club to big European giants. The Nigerian winger’s decision to stay put at the Estadio de la Ceramica has indeed paid off as he on Tuesday became the youngest player to hit the hundredth- game mark for Villarreal

Samuel Chukwueze, became Villarreal’s youngest-ever footballer to feature in 100 games when stepped out onto the pitch against Zamora on Tuesday.
The Nigerian international reached this hallowed rank having starred in the Yellow Submarine’s 4-1 defeat of Zamora in Tuesday’s Copa del Rey encounter.

At 21 years, seven months and 11 days, he eclipsed the record set by Argentina international and AC Milan centre back Mateo Musacchio, who reached the centenary mark aged 21 years, 11 months and 20 days.

“A record-making centenarian. Samuel Chukwueze has reached 100 games with Villarreal’s first team after starting the Copa del Rey game against Zamora CF,” wrote the LaLiga side in a statement.

“The Nigerian forward has reached the 100-game mark (79 in LaLiga, 13 in the Europa League and eight in the Copa del Rey), aged just 21 years, seven months and 11 days, becoming the youngest player to reach this mark in official games for the Villarreal CF first team.”

To mark his latest achievement, the jet-heeled Super Eagles forward bagged an assist as Unai Emery’s men sent the fourth tier Spanish side packing from the competition with Carlos Bacca, Yeremi Pino, Carlos Ramos, Fer Nino and Daniel Raba finding the net.
After an impressive shift, he was substituted for Dani Parejo in the 63rd minute of the encounter staged at the Estadio Ruta de la Plata.

Meanwhile, the Nigerian football great and LaLiga ambassador Mutiu Adepoju has taken to social media to congratulate the 2015 Fifa U17 World Cup bronze boot winner on his historic feat.

“Dear Chukwueze, becoming Villarreal’s youngest centurion ever is a very beautiful accomplishment from you. Well-done on this and I hope this unlocks other hidden potentials in you. Wishing you greater successes ahead,” Adepoju tweeted.

The youngster was snapped up by the Spanish top-flight team from Diamond Football Academy thanks to his impressive outing where he helped Emmanuel Amuneke’s Golden Eaglets win the 2017 Fifa U-17 World Cup in Chile.
There, he was named third-best player behind Johannes Eggestein and compatriot Victor Osimhen.

Having impressed for the club’s reserves in the third tier, he was promoted to the senior team – making his debut in a Europa League game against Rangers – as manager Javi Calleja brought him in as a 79th-minute replacement for Nicola Sansone.
Since then, he has been a regular in the Yellow Submarine setup, while accentuating his importance to the team with eye-catching performances.

The deal saw the highly sought-after star, who models his game on Arjen Robben, sign for a top European club, as those before him had done.
The only snag that hindered a potential move abroad very early was his age, as the attacker 16, and would have to wait for two years before he could sign professional terms.

After celebrating his 17th birthday, he seemed poised to join Arsenal, alongside Nwakali, who signed a five-year contract with the Gunners.
However, Diamond Academy pulled the plug on the deal at the last minute, and Chukwueze began to slip out of the limelight, a situation made more challenging by his Golden Eaglets teammates of lesser profiles securing moves to Europe.

Chukwueze’s emergence came as positive news to Nigerian fans, with the national side lacking a naturally left-footed winger since the untimely retirement of Emmanuel Amuneke, who coached the wonderkid in the Eagles’ U-17 and U-20 teams.

Despite his relative inexperience, Rohr identified the starlet’s raw talent and handed him an audition in a team which, for all its outstanding attacking players, lacks a natural left winger to create panic and havoc on opposition defences with direct running, effective crossing and superb technique.