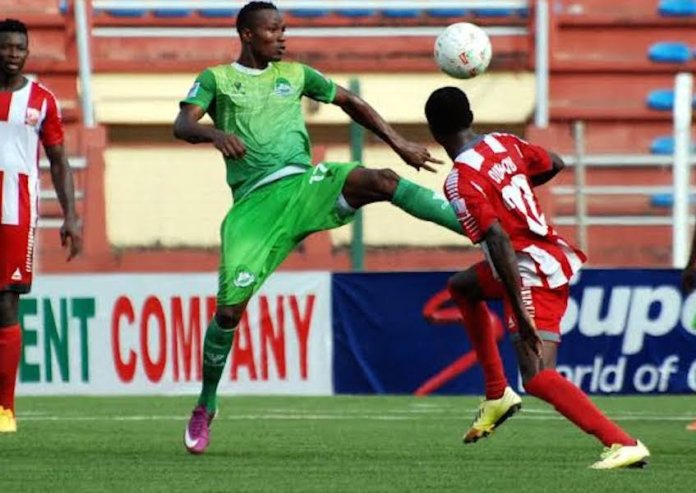 Nasarawa United climbed to the top of the Nigeria Professional Football League (NPFL) table yesterday with 2-1 victory over Heartland FC.

Nasarawa are tied on same points as Rivers United who had consolidated in earlier fixture against Abia Warriors on Saturday. Nasarawa are ahead on account of superior goal difference.

Nasarawa shocked hosts Heartland with the first goal in the 14th minute through Chinedu Ohanachom.

Shedrack Oghali cancels that in the 63rd minute but Adamu Hassan provides the winning strike for the visitors 11 minutes later.

David Ebuka and captain Rabiu Ali scored for Pillars inside the Ahmadu Bello Stadium in Kaduna.

Katsina United fought back after the break but they were far from clinical in front of goal even though the lively Atule threatened the Pillars goal severally.

Dakkada fight back by cancelling Muhammad Abubakar’s 25th minute lead through Aniekan Ekpe (in first half added time) and Solomon Chipotle (53rd minute). The result places the Uyo side at No 4 level on points with Rivers United and Kano Pillars.

In Warri, Uche Ihuarulam strike with seven minutes to go as Wolves picked their first points.

Rangers, Warri Wolves as well as Kwara United, Enyimba (both with a game in hand), Lobi Stars and MFM are among the teams with three points each.