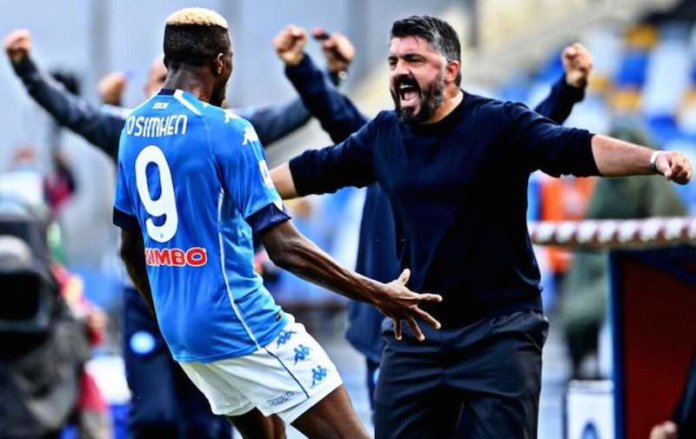 Super Eagles and Napoli striker Victor Osimhen has returned positive for coronavirus yesterday, having been away for the yuletide break his Italian club confirmed yesterday.

The Nigeria international returned to Naples on Thursday having been away to Lagos for the yuletide break.

On arrival, the former Lille and Royal Charleroi star was subjected to the compulsory Covid-19 PCR test and his Serie A outfit disclosed that Osimhen posted a positive result.

Fortunately, he had not met with any member of Gennaro Gattuso’s squad, and the goal machine is now set to remain in quarantine for some days.

“Napoli report that footballer Victor Osimhen tested positive for the molecular naso-pharyngeum swab on his return from abroad yesterday afternoon. The player is asymptomatic and has not met the team group,” the club posted on Twitter.

Since dislocating his shoulder in November 2020 while in action for Nigeria in an Africa Cup of Nations qualifying fixture against Sierra Leone, the most expensive African footballer ever has been on the sidelines.

Since his big money from the French elite division to Italy in August, the Super Eagle has made eight appearances for Gattuso’s side and he has two goals to his name in Serie A.

In his absence, the Blues have won just four of their 10 matches in all competitions, and they are ranked fifth on the Serie A table with 25 points from 13 matches.

Osimhen will be unavailable when the Stadio San Paolo giants travel to Stadio Is Arenas for Sunday’s fixture versus Cagliari and looks set to miss the entire fixtures in January as he bids to clear himself of the virus before getting back to his rehabilitation programme.

The fleet-footed striker rose to fame while featuring for Nigeria at the 2015 Fifa U17 World Cup staged in Chile.

There, he propelled Emmanuel Amuneke’s side to a record fifth world title, while his dazzling performances earned him the Silver Ball award behind compatriot Kelechi Nwakali. He also walked home with the Golden Boot prize after finding the net on ten occasions.