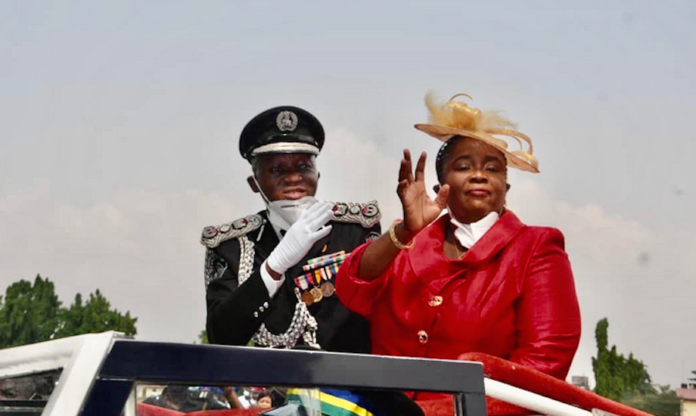 Chiemelie Ezeobi writes that it was garlands and encomiums for DIG Leye Oyebade, a retired Deputy Inspector General of Police, at his pulling out parade from the force

The big guns were recently rolled out for Deputy Inspector General of Police (DIG) Adeleye Oyebade (Rtd) at his pulling out parade from the Nigeria Police. Oyebade’s sojourn into the force came to a close after having attained the mandatory 60 years of age.

At the pulling-out-parade in Police College, Ikeja, Lagos, a traditional ceremony to mark officers’ retirement from service, it was held with pomp as the final process was the pulling out of the force.

As is also traditionally done, after a quarter guard was mounted in his honour, columns of almost 1000 officers in police ceremonial dress held the grand parade led by Baba Sanchi Mikail, a Superintendent of Police.

Another high point of the ceremony was the sheer force of dignitaries that honoured him. They include the Ooni of Ife, Oba Adeyeye Enitan Ogunwusi; Oba of Lagos, Oba Riliwanu Akiolu; retired IG and Chairman, Police Service Commission, Mr Musiliu Smith; the General Overseer of the Redeemed Christian Church of God (RCCG), Pastor Enoch Adeboye; the General Overseer of the Winners Chapel, Pastor David Oyedepo; DIG in charge of Finance – Mr Baba Alkali, Lagos State Commissioner of Police, Hakeem Odumosu, and many top police officers,

As expected, encomiums poured in for the consummate cop. Inspector General of Police (IG) Sunday Ehindero (Rtd) while speaking, said he trained Oyebade and about 70 others in 1986.

He said: “It is not coincidental that it is in this college that we are conducting the pullout of Leye. He excelled during the training as the best all-round cadet and he was awarded a Sword of Honour. I recollect advising the cadets passing out of the college to make a career of police and take the tide at the flood.

Another of his former bosses, Chairman, Police Service Commission, Mr Musiliu Smith said: “Leye is close to us. He has been close to us because he happens to be a very, very sound officer. Not only knowing police duties very well it being a very good detective having commanded the CID Panti, but he also happens to be a good administrator; very good ambassador of the police who has attracted a lot of good people to be close to the Force. So I want to use this opportunity to heartily congratulate him and the family. At least the family will now have Leye 100 per cent, not like 10, 20 per cent before.”

Also speaking, the General Overseer of the Redeemed Christian Church of God (RCCG), Pastor Enoch Adeboye, whose message was delivered by the Assistant General Overseer in charge of Administration at RCCG, Pastor Johnson Odesola, said: In the police, he is known as a DIG. But, in the Church circle, we know him as a pastor; and he functions in all areas as a pastor.

“We have seen him preach. He has functioned on the highest platform along with Daddy G.O. So, our Daddy is sending congratulations. We want to congratulate you, Pastor Leye for working for this nation, serving your motherland and having good support here. And we believe that the service to this land is a continuous one.”

In his valedictory address, Oyebade said, “I thank God Almighty for today and for His grace to witness this ceremonial pullout parade organised in my honour. I am elated and full of gratitude as today marks the end of a fulfilling career as a police officer. What more, it is also my 60th birthday! I would have served for 35 years on 1st of February 2021.

“My enlistment in the Nigeria Police Force as a Cadet Assistant Superintendent of Police along with 106 other colleagues began here on February 1, 1986. I was 26 years old, young, energetic and full of dreams, aspirations and high hopes. We all had ideas on how we would contribute in fighting crimes and how to make our society better. Our path was strewn with different challenges and obstacles but to God be the glory some of us surmounted while others were not so fortunate.

“After bagging an Honours degree in Sociology from the foremost University of Lagos, my mind was made up that the police is the right place to deploy my knowledge and with conviction and passion, I joined one of the best police, if not the best police force in Africa.

“The Nigeria Police Force groomed me to become a full man and a professional law enforcement officer with excellent training in and out of the country. I have served on multi-lateral missions and I will always be proud of the conduct of my colleagues who served meritoriously with other police officers from other countries. Nigeria invested in us and we in return gave our best in the service of the country.“

Admitting that they we knew the road was going to be bumpy, he said they were however overwhelmed with joy, spurred by passion and patriotism to put in their best.

Advising aspiring police officers and cadets, he said whenever they put on the uniform, the best conduct, best character traits and selflessness is expected of them as the uniform is a garb of honour and integrity and must be jealously guarded. “This is so, because the police officer carries the authority of the sovereign to maintain law and order. Therefore, that authority must be exercised with circumspection, respect for rule of law and with decorum”.

On the ongoing police reform, he noted that it holds a lot of promise for a better police force where the public and officers and men of the Nigeria Police will have an understanding that policing is not for uniformed men alone, but a collaborative effort of every citizen.

“Although there are myriads of challenges confronting the police, there is hope on the horizon, and there will be light at the end of the tunnel. It is my desire that the ongoing police reform will continue unabated and that, hopefully in no distant time, we will have the people’s police of our dream. I urge Nigerians and friends of this great nation to support the police believing in their ability to protect lives and property.”

However, he said the welfare of serving officers and men must be given greater and urgent attention, just as training and re-training with an eye on best global practices must be emphasized with technology embraced to combat crime.

Noting that serving as a police officer involves a lot of sacrifice and deprivation, he said at all times, officers must remember their calling and ensure that they are not distracted in the discharge of their duties. He further remembered comrades who lost their lives in the line of duty.

Stressing that he has no regret serving the Nigeria Police, he said there is no honour greater than service to one’s country and humanity.

But he said all these wouldn’t have been possible without the support of his wife, “Adebimpe – a Pearl, a rare gem, a woman of substance who has been a pillar, an adviser, a confidant, a motivator, a critic and sometimes a ‘prop in my distress’ – as well as my lovely children – Ronke and Tola for their fondness for me and my job”.

He further thanked the federal government, President Muhammadu Buhari; Chairman, Police Service Commission, Alhaji Musiliu Smith (IG Rtd); and the Inspector-General of Police, Mohammed Adamu, for giving him the rare opportunity to serve his fatherland and for all the quality trainings received.

He is a member, International Association of Chiefs of Police (IACP); member, Board of the Institute for Peace and Strategic Studies, University of Ibadan; Associate, Nigeria Institute of Public Relations (NIPR); Member, Governing Council, Institute of Criminal Justice and Criminology Administration (ICJCA), and Honorary Fellow, Institute of Information Management (FIIM)

Oyebade’s Awards and Commendations include: The Nigerian Bar Association Award of Excellence; Award of Excellence given by the Inspector-General of Police, Bangladesh; Policing with Fear of God award presented by the Calvary Life Seminary and Theological School of Mission, South Africa; Award of Excellence as the Most Distinguished Service and Excellent Achievements presented by the Stakeholders’ Forum of the State CID, Panti, Lagos; Award of Excellence in Crime Fighting presented by Centre for Conflict Management and Sustainable Peace Building in Nigeria; Award for Invaluable Contribution to Sports Development in Nigeria presented by Discovery Sports Federation; Meritorious Service Award by Crime Reporters Association of Nigeria (CRAN); Humanitarian Service Award of Honour by Honey Land Schools, Ipaja, Lagos; Alimosho Security Watch Award of Excellence; Shooting Stars Sports Club (3SC) Award for Support of Sports; Distinguished Award in Crime Fighting by CRAN; Inspector-General of Police’s Letter of Commendation for Professional Conduct and Zeal, Dedication and Commitment to Duty; Inspector-General of Police’s Letter of Commendation for Exceptional Leadership and Prudence; Best Crime Busting Police Command in Nigeria from Security Watch Africa at Johannesburg, South Africa, and Most Outstanding Commissioner of Police on Security Reforms and Good Leadership in Nigeria by the Nigeria Senate Committee on Police Affairs.

Others are Distinguished Commissioner of Police of the Year on Effective Security Vigilance by the Nigeria Senate Committee on Police Affairs; Award for Dedication and Commitment to Legitimate Duty and Contribution to Sustainable Peace, Stability & Harmonious Co-operation among diverse Communities and Ethnic Groups towards a lasting solution to Conflict and Criminal Activities in the Sub-Region by the African Emerging Leadership Research and Development Organization (AELDO), Abuja , and Award of Excellence – the Most Distinguished Public Service Award by the National Institute for Educational Planning and Administration (NIEPA-Nigeria).

Listed on his Landmark Professional Achievements/Assignments, Oyebade successfully supervised security for the 2020 Governorship Elections in Edo and Ondo States; establishment of the first ICT e-Training Centre (Info-Tech Centre) as the Deputy Commissioner of Police at the Lagos State Criminal Investigation Department, Panti – Yaba, Lagos (2007 – 2008); Initiated Memo that later Actualized to the Establishment of the Police Chaplaincy in The Nigeria Police Force, as the Principal Staff Officer II to the IGP in 2005; served as the Secretary of the Committee under the retired DIG Musa Abdulkadri that reviewed the Government White Paper on Alhaji M. Danmadami-led Presidential Committee on Nigeria Police Reform in 2006.

Oyebade was Secretary to the Board of Enquiry under the Chairmanship of retired IGP Mike Mbama Okiro. The board was set up by the IGP to unravel the killings of six suspected persons (APO SIX), in questionable and controversial circumstances in June 2005.