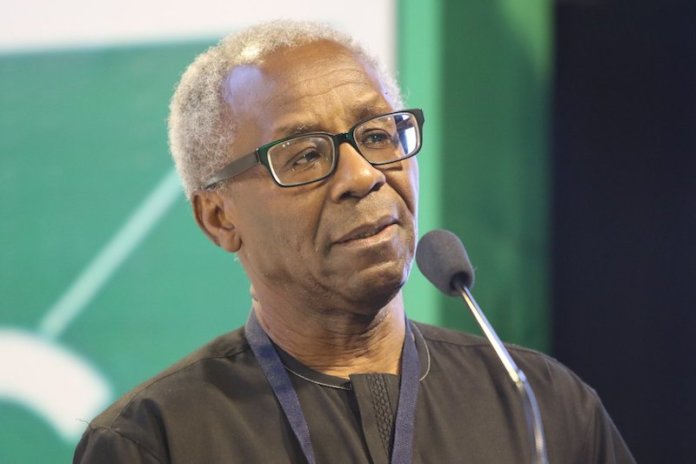 The Chairman of the federal government’s Committee on the Review of Intervention Efforts to Curb the Spread of COVID-19 , Prof. Olawale Tomori, has called for what he called targeted travel restrictions to combat COVID-19 resurgence.

He said the federal government should have considered imposing some travel restrictions, especially for those countries where the new COVID-19 variant was spotted.
He spoke against the backdrop of the rising cases of COVID-19 that have aggregated 2,582 in the last three days, from December 24 to December 26.

He told THISDAY that lack of adequate data on the infected persons may be responsible for the present confusion on whether the second wave has set in or not.
Although the rate of infection in the country is witnessing gradual reduction in the last few days, the figures still remained high.
Figures released by Nigeria Centre for Disease Control (NCDC) in the last three days showed that the number of new cases for December 24 was 1,041; Friday, December 25, 712 and Saturday, December 26 was 829.

However, according to the report certified by the Nigeria Centre for Disease Control (NCDC), the number of new cases has lowered in the 10 frontline states that had previously recorded consistent rise since the recent spike in COVID-19 infections.
Lagos State and the Federal Capital Territory (FCT), the epicentres of COVID-19 infections, are now recording lower figures as compared to what obtained in the last one week.
Other states that are witnessing a gradual drop in infections are Kwara, Katsina, Bauchi, Plateau, Ogun, Akwa Ibom, Delta and Kaduna.

Speaking on the situation, Tomori said it is difficult to attribute the current spike in COVID-19 infections to second wave of the pandemic due to the poor testing and coordination of efforts at data analysis on the health challenge.
He added that it remained a debatable issue whether Nigeria is not still battling with the first phase of the pandemic.

“I never really believed there is second wave, we created artificial results,” he stated.
According to him, the sudden rise in number of new cases may have been due to increase in testing and opening of more laboratories across the country.
“The greatest constraint is incomplete data, incomplete knowledge and acting on ignorance of what exactly is the situation of COVID-19 in Nigeria. We are a nation groping blindfolded in the web and confusing maze of COVID-19 epidemiology. And it is our fault as a seriously unserious nation,” he said.

On whether the introduction of lockdown is an option, Tomori said that some measures needed to be taken to curb certain gatherings that may spark off the surge in COVID-19 infections.
“There are some of the areas where it will help us, like stopping places of mass gatherings. You talk about people going for carols, crossover service and burial activities. Why should we go and gather in one place for such activities? Is God not ominipotent, won’t He hear us if we stay in our homes,” he said.

The Federal Capital Territory (FCT) Permanent Secretary, Mr Adesola Olusade, has said that 22 of the 86 patients that are currently receiving treatment at various isolation centres in the FCT are in critical condition.

He added that they are barely surviving through oxygen at the University of Abuja Teaching Hospital, Gwagwalada where they are being treated.
He gave the assessment yesterday after touring the various centres in the territory over the weekend.

Olusade noted that while non-critical cases were being managed at home, 86 patients are receiving treatment at both the University of Abuja Teaching Hospital (UATH) and the THISDAY Dome while there was a zero case at the Idu centre.

He explained that touring the isolation centres was necessary to ensure that they are adequately operational, in view of the resurgence of the pandemic in the nation’s capital.

“At Gwagwalada, we have about 42 patients; 46 at THISDAY Dome, while at Idu we have zero. Not all of them are on oxygen. There is no time we will not have the issues of allowance, but as they are rising, we address them. It is only recently that this centre was transferred to FCT and we are making all efforts to address all issues,” Olusade said.

The Team Leader at UATH Gwagwalada, Dr. Yunusa Thairu, also said that the second wave of the pandemic presented some worrisome severe elements.
He urged the government to provide more oxygen and as well boost the morale of frontline workers.

Also, the Medical Superintendent at the THISDAY Dome Centre, Dr. Molokwu Victor, confirmed that all categories of frontline workers have not received their allowances since September till date.
He singled out allowances as the major glitches in the operation of the centre unlike supplies of medicals and other necessary items that have been adequately catered for.

“All categories of staff are being owed their allowances but the secretary for health has promised that we should expect something soon, that the FCT Administration is working on it. We have been here since September working, both doctors, nurses, hygienic and maintenance teams have all been here and for four months now, no allowances. This place has just been handed over to FCT last month, all this while it had been with the Federal Ministry of Health”, Victor added.

With the onset of the second wave of the pandemic, and rising cases of infections, the Edo State Government has reactivated isolation and treatment centres in the state, four molecular PCR laboratories and its contact tracing network to ensure the pandemic is contained.
The governor, in a broadcast, said the state government would ensure that it deploys its disease surveillance mechanism and contact tracing network across the state to handle new cases as they arise.

Obaseki noted that the state’s government’s strategy in tackling the pandemic is hinged on decreasing the incidence of the disease and reducing the death rate.
According to him, “Arising from the experience, which we gained during the last outbreak of COVID-19, we now have in place a robust disease surveillance system in the state with well-trained contact tracers, who can undertake active case searches; we have four PCR molecular laboratories that can undertake large numbers of tests with procedures to promptly obtain results from the laboratories.

“Our case management system is intact to provide care for confirmed cases. We also have four well-equipped, functional isolation centers spread across the state.”
He urged the people to take personal responsibility to protect themselves and those around them.