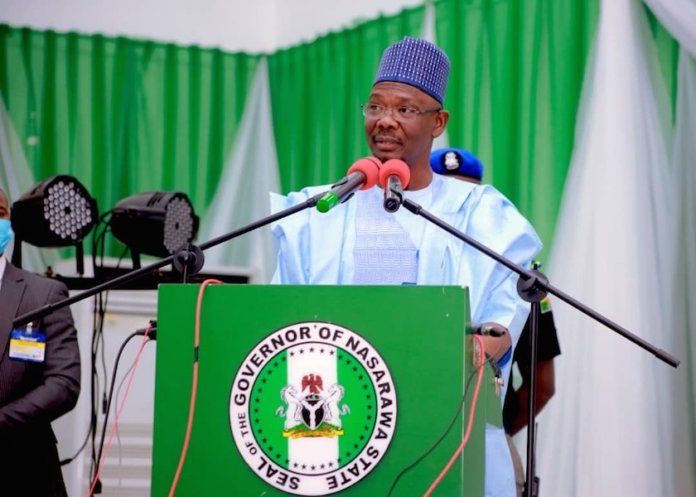 Recently, retired civil servants of Nasarawa State were in a pathetic condition, a situation that caused public discuss which led to series of group agitations and litigations to press home demands, resulting to garnishing of the state accounts by a court. Some lawyers to a group of pensioners in the state approached a court and got judgement against the state government which ordered for the garnishing of all accounts been operated by the state government.

Consequent upon the garnishee order, Governor Abdullahi Sule had to run the state with Internally Generated Revenue (IGR). The state Commissioner for Finance, Budget and Planning, Haruna Adamu Ogbole, disclosed this in his office when addressing journalists on the financial status of the state since the state government could not access its accounts.

The commissioner explained: “It is not that government is totally grounded. We have IGR in the state that we are leveraging on to make the government run, but the basic thing the court garnished is our salary accounts. Nasarawa is a civil service state and once salaries are not paid, it affects the whole state and that is what we are facing.”

He said that in February, 2020 the state government raised N1.2 billion as IGR and was expecting to raise over N2 billion before the outbreak of COVID-19 which affected the state IGR.

According to him, “IGR is being driven by economic activities, so the more the economic activities of every month, the higher the IGR we get. It is not static base on the COVID-19 pandemic as it affects the globe.”
But Governor Sule, when interacting with members of the Nasarawa State chapter of the Corrrespondents’ Chapel of the Nigeria Union of Journalists, who paid him a Sallah homage at Gudi, said the gratuities the pensioners were fighting for can’t be paid until the garnishee order was removed from the said accounts. However, the governor said the state government was able to pay salaries of civil servants for the month of July, 2020 despite the garnishee order of such accounts after he called Lagos, headquarters of those banks.

Sule lamented that he inherited close to five garnishee orders on arrival as governor of the state, even as he explained that since the period of military administrations, the state had not been saving for gratuity. So gratuities have been accumulating and not paid.

“As a result of that, their is a huge accumulation of gratuities. So what the previous administration of Senator Umaru Tanko Al-Makura did was to set aside a certain amount of money to pay gratuities for the state. But Local Governments didn’t have enough to eat, talk less of paying gratuities,” he maintained.

The fact is that Governor Sule’s immediate predecessor, Senator Umaru Tanko Al-Makura, had sometimes ago expended over N2 billion on servicing of pensions and gratuities of retired civil servants of the state since his assumption of office in 2011. The erstwhile governor had stated this in Lafia when interacting with journalists, explaining that the N2 billion was used to clear the backlog of monies owed retirees from the Paris Club Refund.

Senator Al-Makura continued that local government pensioners were also paid their entitlements despite the meagre resources accrued to the state from the federation account. However, the governor revealed that the difficulty of the state government in meeting its obligations as regards to state government workers was due to the enormity of the funds needed to service the salary wage bill in the state.

Al-Makura had however assured of his administration’s commitment towards the plight of retirees in the state, even as he added that retirees welfare was his utmost priority as senior citizens who have contributed to the development of the state.

He said: “We have paid over N2 billion in servicing gratuities and pensions, and as regards to the state government workers’ emoluments, we are alive to our responsibilities, but constrained by the minimum wage structure the state has adopted and the meagre resources accruing to the state from the federation account. Since we came to power in 2011, the welfare of retirees has been our focal point and I can assure you that no administration has accorded it such priority as this administration has done.

Garnishing of the state accounts did not go down well with the Nigerian Union of Pensioners (NUP) Nasarawa state council hence it bashed a faction of the union over the garnishing of the state account. The NUP attacked a factional group “Concerned Pensioners”, by heavily criticizing it for not been patient on agreement reached between the state government and the NUP to pay retirees their pension and gratuity out of court.
According to a statement signed by chairman of the NUP Musa Obakpa, and the secretary, Ibrahim Usman, maintained that the action of the Concerned Group did not in any way reflect the interest of the mainstream pensioners. The NUP leaders counsel the state government to be wary of element who under the guise of fighting for retirees right, were rather trying to truncate the good intentions of the present government in bringing sanity to retirees.

The statement read in part: “The action of the concern group numbering only 650 out of the total number of over 9,000 pensioners in the state does not in any way reflect the interest of other loyal pensioners who considered dialogue and diplomacy as the best way to settle the lingering problem. We reject in total any move by the opposition to use our respected union to achieve their political agenda as currently chicken in by the concern group.”

But Governor Sule had said Nasarawa State was in need of over N40 billion to clear the backlogs of gratuity been owed Pensioners in the state. Sule disclosed this in Lafia, the state capital, during an interaction with journalists as part of activities marking his one year in office. He however said his administration has been paying the pensioners 100% of their pension as promised when he assumed office in order to help them take care of their families.

According to him, “their gratuity can not be paid for now. This is because we need over 40 billion naira to pay. The money is huge considering the total allocation which comes from the federation account monthly. I am going round to see how to improve the revenue of the state. When that is done, we will commence the payment so that subsequent administrations coming after me can continue.”
As the inability of the state to pay gratuities to retired civil servants persisted, NUP came out to expressed its mixed feelings to the pathetic situation decrying at the non-payment of federal and state governments’ counterpart funds into the Local Government Pension Fund. Nasarawa State chairman of the NUP, Musa Obakpa, expressed feelings of the state pensioners over the situation when speaking on the occasion of the 2020 Pensioners Day celebration held in Lafia.

“Another problem compounding our members at the Local Government is the failure of the federal and state governments to pay regularly their 5 per cent and 2.5 per cent Counterpart Funds respectively into the Local Government Pension Fund which was stopped without just case. May we bring to the attention of Governor Sule that section 173 subsection (3) and 210 stipulates that pension should be reviewed every five years or whenever wages of workers are reviewed of whichever comes earlier. It may interest the governor to know that the pensioners are due for another pension increase in the year 2015 as the last increase was made in 2010,” Obakpa said.

Obakpa however said the pensioners noted with satisfaction various strategies currently put in place by the Nasarawa State government to unravel reasons for the paucity of funds to pay monthly pension and gratuity as at when due.

“As the administration is writing its name in gold in this direction, this tangible exercise should be logically carried out with deligence,” he concluded.
This was even as local government pensioners in the state in their hundreds staged a peaceful protest in Lafia, the state capital, over three months unpaid pension entitlements. The protesters numbering over 3,000 carried placards with different inscriptions such as: “LG Autonomy is not to Kill Pensioners.” We Say no to LG Percentage Payment”. “ALGON in Nasarawa Is not Fair to LG Pensioners,” among others.

Spokesperson of the group, Abdullahi Ladan, complained that Local Government pensioners in the state have not been paid their three months pension. He complained that untimely remitance of the statutory 15 percent by Local Government Areas to the state’s pension bureau was responsible for the none payment of their three months pension. The spokesperson who bemoaned the hardship being experienced by the over 6,000 local government pensioners in the state, therefore appealed to the state government to intervene especially at this time of coronavirus pandemic.

Be that as it may, the Nassarawa State government has begun putting smile on the faces of the senior citizens of the state as the Nassarawa State Pension Bureau on December 18, 2020 commenced payment of N500 million gratuity to 500 retirees in the state. Director General of the state Pension Bureau, Abdullahi Sani Osaze, flagged off the electronic payment of the gratuities to retirees in Lafia.

According to the Director General, “following the release of N500 millions by Governor Sule as part of gratuity payment, we are starting the e – payment exercise in batches until we finish. He commended Sule for priotising retirees welfare in the state, even as he appealed to the retirees for continuous support and cooperation with the current administration under the leadership of Governor Abdullahi Sule.

“We are starting the payment exercise today, we are paying in batches until we finish and the first batch is up to 500 retirees,” he said.

Speaking to journalists during the e-payment, Secretary of the Nigeria Union of Pensioners in Nasarawa State, Ibrahim Usman, expressed appreciation to the governor for keeping to his promise. While promising the Union’s continuous support of the present administration under the leadership of Abdullahi Sule, Usman appealed to the state government to sustain the payment.