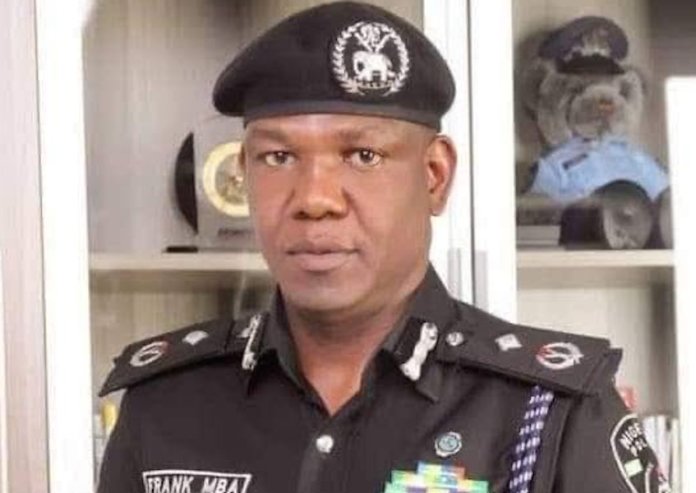 On one hand he clutches the gun while the other wields the wig and gown. Although both represent the insignia of the Criminal Justice System, the former stands for law enforcement while the latter is to ensure justice.

In many fora, Mba has always believed that having the best of both worlds, in either law enforcement or ensuring justice is done, has made him a better police officer. But while both professions are his passion, another career trajectory has been his foray into the media and by extension, public relations, which has soared his profile as a consummate police man.

But how did Mba become a policeman? For someone who never dreamt of becoming a police officer, his foray into the profession started from watching a police parade. As shocking as it might seem, he had just finished his secondary school and was waiting for his JAMB result when fate intervened.

He had gone with a friend to the Polo Park in Enugu where a police parade was going on. Seeing the beautiful procession done with razor-cut precision, his passion to join the force was kindled. He applied to join the police and upon recruitment, joined as a cadet in 1992 as a teenager.

But before the police recruitment form came out, he had already gotten admission to the University of Nigeria, Nsukka (UNN) to study Political Science. He was just in his first semester before the police came calling. He quickly pulled out and went to the Police Academy. After his training in the academy, he went on to acquire a degree in Law- which happened to be his first love.

From those days of humble beginnings at the police college, Mba has grown through the ranks over the years while occupying positions, all targeted at making him a well-rounded officer. Just last week, he was promoted to the enviable rank of a commissioner of police.

Academic-wise, Mba studied at the prestigious University of Lagos, Akoka, and the Nigerian Law School, Abuja where he graduated with a Second Class Upper Honors in Law from both institutions, earning him an LLB and BL respectively. He was subsequently called to the Nigerian Bar as a full-fledged Attorney in 2002.

In fact, his outstanding performance in academics at the Law School earned him Hon. Justice Kayode Esho’sAward as the Best Graduating Student in Professional Ethics, Nigerian Law School, 2001/2002.

Mba is also a proud alumnus of the University of Dundee, Scotland -United Kingdom, where he obtained a Master’s Degree in Law, also graduating with a distinction.

Mba was appointed into the Nigeria Police Force on May 18, 1992 as a Cadet Inspector of Police, rising to his present rank. A product of the Nigeria Police Academy, Kano, he is also a graduate of the prestigious FBI National Academy, Quantico- USA. In addition, he holds a Certificate in National and International Security from the Harvard University, USA.

For those who know him, Mba is a passionate and versatile police officer who has worked in very challenging police units and departments across the country, cutting across investigations, operations and public relations.

Knowing the importance of trainings, Mba has attended some of the finest Law Enforcement trainings, both within and outside Nigeria. These include: Countering Violent Extremism and Police Leadership Course at the International Law Enforcement Academy (ILEA), Roswell, New Mexico, USA (2018); Strategic Leadership and Command Course, Police Staff College, Jos (2017); and Crisis and Disaster Management Course, Israel (2013).

On the international scene, he was a member of the Nigeria Police Contingent to the United Nations Peace-Keeping Mission in Liberia between 2006 and 2007, where he distinguished himself through a combination of hard work, professionalism, and discipline, thereby earning himself the prestigious UN Medal.

He is currently the Force Public Relations Officer (FPRO), a job description that qualifies him as the National Spokesman of the Nigeria Police.

Since his assumption of duty, he has committed himself to bringing his wealth of experience to bear in revamping the image of the force, improving the relationship between the citizens and the police, bridging existing communication gap between the police and its stakeholders, working with Civil Society Organisations (CSOs) and other stakeholders to promote police accountability and compliance with National and International Human Rights Laws, and assisting the Inspector-General of Police (IGP) in realising his mission and vision for the force and the nation.

He is also actively involved in the development and implementation of national de-radicalisation and counter-terrorism programmes aimed at weakening the hold of the Boko-Haram extremists in the North-Eastern part of the country. In addition, he is a member of the Police Team working on the full implementation of a national Community Policing Programme for the country.