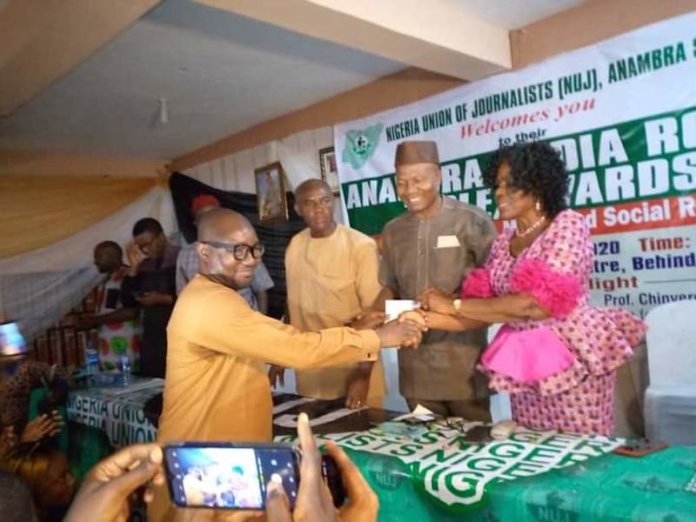 The Correspondent of THISDAY Newspapers in Anambra State, Mr. David-Chyddy Eleke, has won the maiden edition of the Prof. Chinyere Okunna Award for Ethical Journalism.

Eleke was announced winner at the weekend during the Anambra Media Round Table/Award celebration, which also featured the Man of the Year Award at the Godwin Ezeemo Press Centre in Awka, the state capital.

The award was instituted by Prof Chinyere Okunna, who is the first female professor of Mass Communication in Nigeria and the Dean of Faculty of Social Sciences in Nnamdi Azikiwe University, Awka.

Okunna said: “In the Department of Mass Communication, Nnamdi Azikiwe University, I have instituted an award for the best graduating student, and another one in the faculty of social sciences. So I felt that as we encourage our students who are studying to become journalists, we can also encourage journalists who are already in the field practicing.”

The Chairman of the three-man panel of judges for the award, and Managing Director of the state-owned newspaper company, National Light, Mr. Chuka Nnabuife, who announced Eleke as the winner of the maiden edition of the competition, said his entry with the caption: ‘Travails of Awaiting Trial Inmates in Anambra Prisons’, was daring and deserved to win the award.

According to him, “We received 17 entries from print, online and radio. There were no television entries. This award, it is believed, would spur journalists to sit up and work hard.

“Most of the entries were well investigated stories that showed courage on the part of the reporters, but the panel resolved that for his story on the travails of awaiting trial inmates in most prisons in the state, David-Chyddy Eleke of THISDAY newspaper deserves to win the award.”

Eleke had last weekend at Oriental Hotel in Lagos State received an award as the second runner-up of the Diamond Award for Media Excellence in the investigative reporting category.

Meanwhile, the Anambra State Council of the Nigeria Union of Journalists (NUJ) has named the Managing Director and Chief Executive Officer of Las Vegas Pain Institute, Dr. Godwin Maduka, as its Man of the Year.

Maduka, a pain management expert, is a philanthropist who has single-handedly changed the face of his community, Umuchukwu, in Orumba South Local Government Area of the state with diverse infrastructure.

From championing the change of the name of the community from Nkerefi to Umuchukwu, Maduka built over 100 houses to replace all thatched houses in the community; construct 100kilometre road around the community, a cathedral each for Catholic and Anglican churches, police station, post office, a palace for the traditional ruler as well as provided electricity.

He also donated about 100 motorcycles to unemployed youths, gave scholarship to over 200 students, built schools, courts and a police college to be donated to the federal government; built a 17-floor medical research institute among several others.

State Chairman of NUJ, Mr. Emma Ifesinachi, stated that the union named Maduka its Man of the Year for selflessly changing the fortune of his once sleepy agrarian community to a city.

He noted that Maduka, who is running for the governorship position of the state, can be judged from what he has already done, using his personal resources.