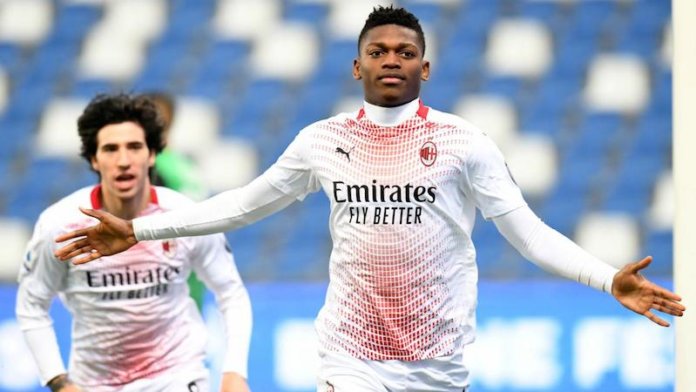 Rafael Leao scored the fastest goal in Italian Serie A history as AC Milan netted after just six seconds of their game at Sassuolo on Sunday. Milan won 2-1.

The Portuguese forward, 21, took Hakan Calhanoglu’s pass in his stride to stroke the league leaders ahead virtually from the kick-off.

Leao’s goal beat the record of 8.9 seconds set by Piacenza’s Paolo Poggi against Fiorentina on 2 December 2001.

Milan were a point clear of city rivals Inter at the top going into the game.

Belgium midfielder Alexis Saelemaekers added a second midway through the first half to double Milan’s lead against their sixth-placed hosts.

Shane Long’s goal for Southampton against Watford on 23 April 2019 is the fastest strike in Premier League history at 7.69 seconds.

The win keeps Milan a point clear of rivals Inter, who beat Spezia 2-1.

But it was Leao’s early strike that will adorn the record books, with a shocked Sassuolo defence punished for backing off as Milan surged forward right from the referee’s whistle.