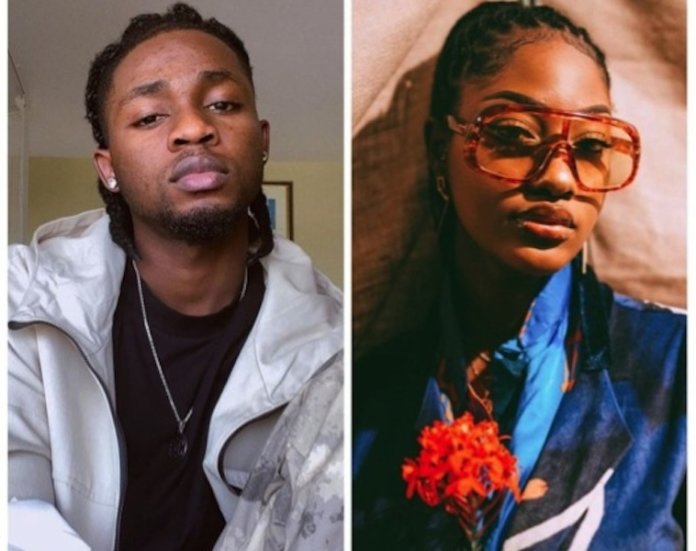 It was at The Big Brunch, a concert that held at Kampala’s Speke Resort. The show, which is the first music concert in Uganda since the COVID-19 lockdown restrictions were imposed by the Ugandan government sold out.

Shortly after performances by Omah Lay and Ms Tems, it turned out that they had broken COVID-19 lockdown restrictions and the Ugandan authorities insisted that the duo must face the law. The singers were arrested on Sunday, December 13 and charged in a magistrate court the following day for “negligently doing acts likely to spread an infectious disease C/S 171 of the Penal Code Act.”
According to the Uganda police, the Nigerian artistes “connived with area police officers, who guarded the illegal event.”

The some police officers were arrested for “failing to detect the criminal acts that took place in their area of jurisdiction.” The Ugandan police condemned the acts of the suspects who they described as selfish individuals ‘‘bent on violating the directives on COVID-19 with the purpose of making money while risking the lives of many Ugandans.” The show held at a time when political rallies and churches in Uganda were restricted to 100 people. Ugandan artistes and citizens condemned the widely promoted concert which had more than 1000 people in attendance.

Tems would not eat or drink in custody. She was placed in handcuffs alongside colleague, Omah Lay, during court appearance. The manager of the venue where the musicians performed, Dungu Ivan, and the events manager, Prim Kasana, and Ms Tems’s manager, Muyiwa Awomiyi, were also arrested. The second day, they were jointly charged alongside the area officer and three police officers and remanded in prison.

Reacting to the news of the arrest, an Ugandan wrote: “I am proud of you. I have been depressed and extremely discouraged by this event. How it went unnoticed is another thing our Intelligence services must look into. In everything we do, we must have moral decency in it. I support NRM and President Museveni 100% and will defend him always.”

Ugandan musicians like Bebe Cool Mun G, Cindy, Crysto Panda, King Saha, and Geosteady, expressed shock and had felt cheated when they discovered that Omah Lay and Ms Tems had held a music concert in their country.
After their arraignment, the singers remained in custody for two days, before the matter was resolved through diplomatic intervention. A Chief Magistrate Court dropped the charges against the Nigerian singers.

Did Omah Lay and Tems commit an offence? Section 171 of the Ugandan Penal Code 1950 provides that, “Any person who unlawfully or negligently does any act which is and which he or she knows or has reason to believe to be likely to spread the infection of any disease dangerous to life commits an offence and is liable to imprisonment for seven years.” So yes, they did.

However, some argue that Omah Lay and Tems were only artistes and the organizers of the event should be held accountable. The Ugandan government argues that even though Omah Lay, Tems and Muyiwa Awoniyi didn’t organise the event, they are the main attraction and should have also been cognizant of COVID-19 restrictions in the country.

Omah Lay is popular for his hits ‘You’, ‘Lolo’, ‘Damn’, ‘Bad influence’ and a lot more. His latest hit ‘Godly’ occupies the number one spot on the charts for more than a week now. His ordeal nonetheless, Omah Lay’s songs have become very popular following is ordeal in Uganda.

Growing up, Oma Lay started producing music at an early age as he took after his grandfather who was a percussionist for legendary Highlife singer Celestine Ukwu. His dad, who also was a drummer, in as much as he didn’t reach higher heights, was the sounded hero in their locality in terms of drumming.

According to the singer, he started music at the age of 15 when he was a producer for a very long time and the started singing again. His style of music is Afro-fusion. Singles like ‘Hello Brother’ and Do Not Disturb which was released in 2019 heralded his emergence in the music scene but got everybody’s attention with “You” and “Bad Influence” which was off his debut EP, Get Layd.

Ms Tems, on the other hand, is behind the singles ‘Looku Looku’, ‘Mr. Rebel’, and the viral hit ‘Try Me’. Tems was born in Lagos in 1995. Her father is British, but her parents separated when she was five and she was brought up by her mum. At school, she was noticed by her music teacher and she learnt the piano. She practiced singing with her brother’s guitar accompaniment. Tems attended Dowen College in Lekki and graduated in economics in Johannesburg.

In 2018 she recorded Mr. Rebel – a song of her own composition. In August 2019, Tems released the single Try Me. It became a major hit and currently has over 3.7 million views on YouTube. In 2020, DJ Edu chose her as one of “ten artistes to watch” that year. She was recruited that year by American singer Khalid to join him and fellow Nigerian Davido on an Afrobeats remix of “Know Your Worth”.