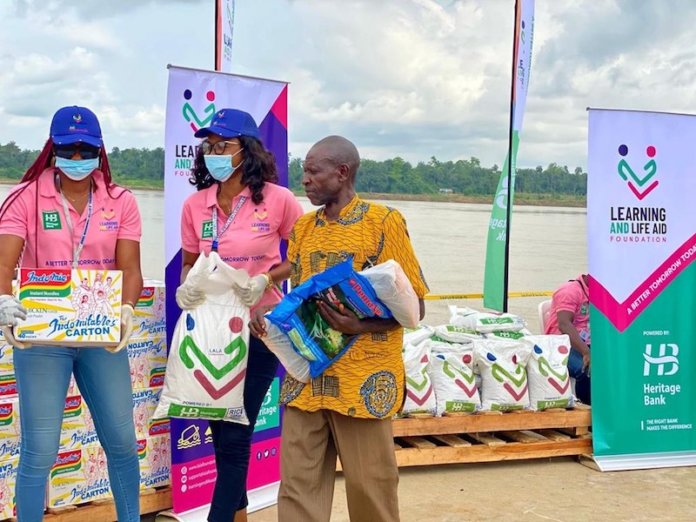 Over 800 households in bayelsa state have benefited from the flood relief materials donated by a non governmental organization Called Learning And Life Aid (LALA) Foundation in partnership with Heritage Bank.

The items such as mosquito nets , hoes, cutlasses, rain boots , carton of noodles and bags of rice were presented to the flood victims in OPOKUMA LGA which flagged of from the 7th at Gbaranama community and ended on the 12th In oyobu.

Speaking during the presentation of the items, President of Learning And Life Aid Foundation Lilian Alaere Ebifegha has advocated that a permanent solution be proffered to prevent the perennial flooding in the Niger Delta region of Nigeria.

She said while speaking with newshounds at Abuwari Community in Opokuma that the distribution of the relief materials is targeted at 10 communities to assuage the hardship occasion with the 2020 flooding in the state .

She said the vision of the foundation is to help individuals attain at least a minimal state of well being, explaining that their focus centers on education and life aid to the people in rural areas.

Lilian Alaere Ebifegha admitted that giving out palliatives was only to cushion the effect of the devastating flood on the people, not a lasting solution to the challenges posed by the flood.

She called on well meaning Nigerians and indigenes of the state to support its people who lost their means of livelihood and property to the flood. She applauded Heritage Bank for its sponsorship and trust and the role it played in ensuring the success of the event.

Also speaking, a founding memebr of the NGO Mr Tonbara Egbe said the foundation is striving to improve the lives of the people through life aid support programs.

He also appealed to the state government to find a lasting solution to the yearly flood that ravages Bayelsa communities by dredging the river nun, which he said has become shallow and over flow it’s banks.

A beneficiary from the outreach MR Frank Lucky thanked the Foundation and Heritage Bank for its kind gesture and prayed that God almighty bless the members of the foundation and give them the heart to do more .. he further applauded the organization for their coordination was superb and in an orderly manner devoid or rush and fighting …

All Herdsmen Are Not Bandits