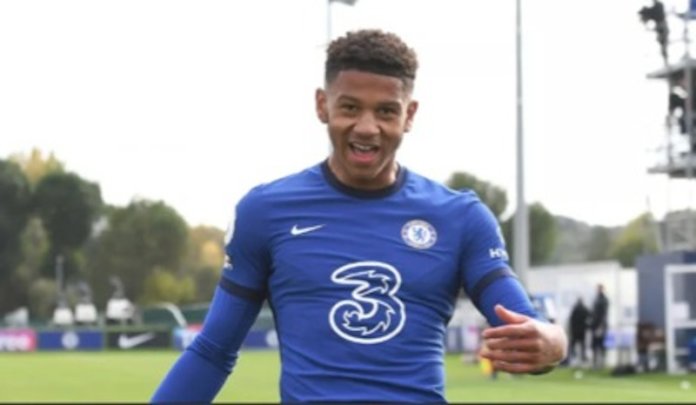 Though Bryan Fiabema has played for Norway at the age-grade level, the Chelsea U-23 player’s quest to play for the country of his father is unprecedented
Despite Chelsea super kid Bryan Fiabema being provisionally cap-tied to his country of birth, Norway, his father, Mina Fiabema, has however assured that his international future lies with the Nigerian national teams.

Bryan comes from a sports family as his father played field hockey back in his secondary school days and his sister also plays football.

The 17-year-old has had a fine start to the 2020-2021 season, scoring four goals in seven Premier League 2 appearances for Chelsea U-23s and was nominated for the Premier League 2 Player of the Month for October 2020.
“Bryan is eligible to represent Nigeria and Norway, I have always advised him to play for Nigeria and he’s actually open to it,” said Fiabema to allnigeriasoccer.com.

“It’s not just about me influencing him, he has followed Nigerian football, followed Nigeria at the World Cup, and at a very tender age of 10, 11, he had the Nigerian flag in his room.
“The last World Cup we went for, he asked me to buy him a Nigerian jersey, so he loves Nigeria but unfortunately he hasn’t been there.”

Fiabema Senior revealed that his son was crazy about former Real Madrid striker Cristiano Ronaldo in his formative years as a footballer and started out his career as a winger before he was converted to a number 9 by Norway’s U-17 national team, then Chelsea.

“I don’t know if he idolises any Nigerian player, I only know of one international player he idolises and follows and that player is Cristiano Ronaldo.
“From what I saw, his best position is playing from the right of attack but Chelsea are playing him as a main striker and he’s also delivering.

“The Norwegian U-17 were using him as a top nine and he was playing from the wing at Tromso.
“He models his game after Ronaldo, when he was younger he always asked for boots with CR7.
“He’s grown now so he’s beginning to be himself, when he was much younger he walks and balances like him, everything about him was Ronaldo.

“He has speed and is good at dribbling,” he added.
Fiabema played non-binding games for Norway’s U-15 and U-16 national teams but became provisionally cap-tied to the Scandinavian nation when he started against Bulgaria in an U-17 EURO qualifier in October 2019.
Fiabema is Chelsea’s first signing under Frank Lampard, after joining from Norwegian side Tromso IL on January 1, 2020 for a fee of £540,000, the young striker now 17-years old, has had an incredible 11 months in the academy set-up.

Fiabema joined his local side in 2016, who was playing in Eliteserien, Norway’s top flight at the time. The division has been a great incubator for developing players, while also giving first team experience at noticeably young ages.

Two examples of this are Real Madrid’s Martin Odegaard and Borussia Dortmund’s Erling Braut Haaland. In 2015, Odegaard became the youngest player to ever play in Norway’s top division, at 15 years and 158 days. Just 11 days later, he would go on to earn the accolade of becoming the division’s youngest ever goalscorer.
Haaland on the other hand, made his Eliteserien debut in 2017-just a month shy of his 17th birthday, scoring the winning goal six minutes after being introduced as a substitute.

Although Fiabema was not able to get as many minutes compared to other Norwegian talents, recording just one substitute appearance, he was able to get minutes at the international youth level. There, he represented and scored for the Norwegain national team at every level from U-13 to U-17. Ultimately, it was only after a trial with the Blues that he was able to seal a move to west London.

Upon starting the next phase in his young career, Fiabema was placed in Chelsea’s U-18s, but progressed quickly. He made one substitute appearance before getting his chance in the Development Squad, coming on once again as a substitute in a 1-0 win against Everton U-23s. He would play as the lone striker from the 62 on, with a freshly rehabilitated Ruben Loftus-Cheek playing behind him in a 4-2-3-1.

This season, the young Norwegian has been able to continue his progression at a fantastic rate. After starting the campaign in the U-18s, he was once again moved back to the Development Squad, where he has remained a key player. He has been in fantastic scoring form, registering four goals in five appearances as a part of England’s reserve league, known as Premier League 2. Playing for both club and country, he has shown himself to be a confident player who loves to attack from central areas. From these areas, he shows off his anticipation and positional awareness. Furthermore, he has displayed a cool head from the penalty spot, calmly putting away two penalties against Walsall and Liverpool.

Simply put, Fiabema is a highly adept striker. His prowess up front and natural eye for goal can be summed up with two wonderful strikes against Derby County U-23s, which changed the game and helped Chelsea turn around a 2-1 deficit. The first, a left-footed shot from outside the box, he managed to squeeze the ball in from a tight position after it got away from the Derby defenders. The second is taken after a lovely run from Thierno Ballo into the box from the left side. Fiabema ran through the middle, anticipating the incoming pass, and putting the ball away nicely to the keepers right. He scored despite pressure from a number of surrounding defenders.

The two goals showed his technical ability, scoring with both feet and taking his shots first time.
While the young Norwegian has shown his exploits whenever he has been given the opportunity, his winning goal against Manchester United in the semifinal of the FA Youth Cup is undoubtedly his stand-out moment this season. In a game that was broadcast live in the United Kingdom,
Fiabema again showed his ability to exploit space in central areas and hit a first time shot into the roof of the net.

Fiabema is indeed quickly gaining a reputation as the star striker in Chelsea’s youth set-up. If he can keep his confidence high and keep performing on the pitch, one would think that he will be marked for a call up to the senior squad, alongside Development Squad captain Tino Anjorin, who is highly regarded at the club and has already been handed two senior appearances under Lampard.

Of course, it is too early to tell what the next steps will be for Fiabema. In a club that demands excellence across all teams, Andy Myers will be pleased to have a new exciting talent that he can assist in moulding into a player good enough to take the leap into the first team. All while simultaneously helping him to clinch a second successive Premier League 2 title. The club, however, will probably want to assess him for at least another season before a loan move would be on the cards.

Chelsea’s record of keeping young players focused, whether they make the grade into the first team or not, has been excellent over many years. This, paired with his ability, should give him the opportunity to realise his potential. Whatever the future holds, these are exciting times for Fiabema and the future of the No. 10 role at Stamford Bridge.