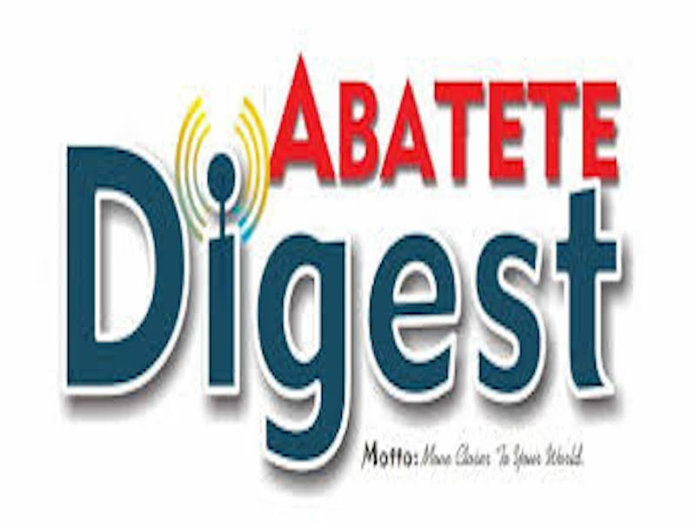 Abatete Digest, a bi-annual news and social activities magazine will be launched on December 22, 2020 at Abatete, Idemili North Local Government Area of Anambra State. The magazine, which is designed to inform, educate, entertain, and bring the activities of government closer to the people is published by Pat Onukwuli, a lawyer and Estate Surveyor who currently teaches at Bolton University, United Kingdom and holds the traditional title of Omesilincha Abatete.

The launch will be headlined by the President General of Abatete Development Organization and chaired by His Royal Majesty, Igwe Engr. Charles Emeka Efobi, the traditional ruler of Abatete community. The event will take place at Seat of Wisdom Library, Abatete, at 10am.

The 64-page magazine is arranged in sections that include, but not limited to news reports, heritage, politics, economy, health, etc. Being the first of its kind in the town, the magazine is at once accepted as a vital news medium to close the gap of information in Abatete. It is seen as not just chronicling and reporting important milestones in the town, but also documenting same for posterity. It therefore hopes to fill this gap and bring authentic information on social and economic activities in the town to the people, especially the segment of the society that is easily influenced by mass media.

Aware of the challenges facing Abatete community – the things that had held up its development, Abatete Digest tries as much as possible to report the progress made by a few individuals in furthering the peace and development in the town while encouraging others yet to be persuaded to make up their mind. To that extents, it refrains from reporting issues that will negatively impact on the sudden burst of developmental strides evident in the town in the last two or three years.

It does not fail to commend the humanity of the few who invested their time and resources in reshaping the communal landscape through building of roads, library, hospitals, schools, community bank, community town halls, boreholes, fencing of government schools, offer of employment, empowerment, among others. In its mission statement, the magazine thinks there should be a balance between leadership and followership, insisting that neither should suffer unduly. While commending the efforts of those who offered to invest in the collective good of the people, the magazine discourages any attempt at manipulating the dreg of humanity through those gifts. And to stem possible occurrence and avoid that common failing of mankind not to anticipate a storm when the sea is calm, it calls for collective responsibility as to the choice of project, location, and protection.

Abatete Digest observes that since the town is strategically located, providing an alternative thoroughfare to traffic from the commercial city of Onitsha through Anaocha in Anambra State to Orlu in Imo State, and between the industrial city of Nnewi and the capital city of Awka, every effort at developing the town as another portal should be encouraged. Accordingly, the magazine commends the efforts of the traditional ruler of the town, His Royal Majesty Igwe Emeka Efobi and members of the Igwe- in-Council whose leadership has provided the peace that encouraged the development. The magazine is no less impressed with the unsparing effort of such benevolent developers like Ezinaeliaja III, Odogwu Abatete, Ochiagha Idemili, Ichie Nnadiebube, Ochendo Abatete, Ezechinetugo, Ozi-Uzo, Ogalanya Umuazi, Agunechemba, Chike Oranika, Ezennia Joe Ezigbo,Idejiuno Chukwuelue among others. While not discountenancing the abiding role of the Abatete Vigilante Services which works hard to rid the town of criminal elements.

Regardless, Abatete Digest, believes that all these efforts may come in vain if there is no structured media support to expose the positive developments on a regular basis and encourage those yet to make impact to do so. It therefore urges other great sons and daughters of Abatete to enlarge the number of the altruistic few.

On the cover story of the magazine is Prof. Charles Egbu, a worthy son of Abatete who was appointed the First Black Vice Chancellor of Leeds Trinity University in the United Kingdom. The magazine also recalls the contributions of late football legend Albert Onyeanwuna, another great son of the town as well as the 2010 most beautiful girl in Nigeria, Fiona Amuzie. It also broached the issue of Omanne, the story of ancestral kinship, linking Abatete, Umuoji and Nkpor which it hopes to exhaust the narrative in its next edition.

There are goodwill messages from the Deputy Governor of Anambra State, His Excellency Dr. Nkem Okeke and many other great sons and daughters of Abatete. There is also input from the Anambra State coordinator of SMEDAN, Engr. Chito Onuzulike, who expressed interest in partnering with the magazine to organize training for Abatete youths.

Every story written, every interview conducted, and every graphic detail was done with great attention to facts and delivered in simple English. There may be nothing lacking in the magazine regarding its set objective. However, it admits of no claim to perfection and allows enough room for correction against the next publication.
––Ejike Anyadub writes from Abatete.