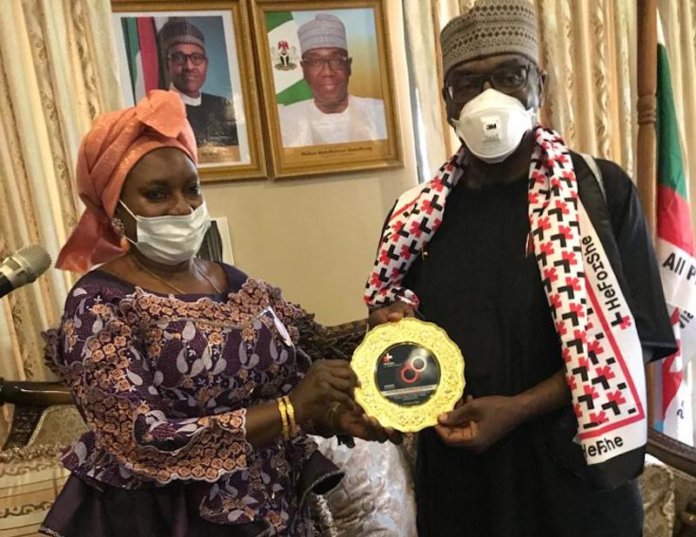 The United Nations has conferred the Kwara State Governor, AbdulRahman AbdulRazaq, with the ‘HeforShe’ award, for his efforts and cabinet picks, which have mainstreamed gender inclusion in the state’s political structure.

The award was conferred on the governor in Ilorin, the state capital, when the Minister of Women Affairs, Pauline Tallen, paid an advocacy visit to rally the state residents behind the national campaign against gender-based violence.

AbdulRazaq made history last year when he appointed the most women-friendly cabinet on the African continent, a feat he recently cemented with the appointment of at least 50 per cent female permanent secretaries in the state. Both feats are a first in the state and the country.

Pauline said the governor has earned himself a golden place in the world’s hall of fame for gender inclusion, and called on him to do more to fight maternal death and other issues affecting women.

“The award is in recognition of your outstanding contributions to promotion of women’s rights, visibility and empowerment,” Pauline said, commending the governor for his exemplary style of governance and his pursuit of gender inclusion which has attracted both local and international recognition.

She said the ‘HeforShe’ campaign is the brainchild of the United Nations to recognise any public office holder with exceptional passion to drive gender equality, adding: “We want to put it on record that our dear governor of Kwara State deserves to be recognised not just in Nigeria but by the United Nations.

“We are here today to celebrate a champion who has proven his words. We are here to launch the HE for SHE Gender Equality campaign, which he (AbdulRazaq) deserves more than any other governor. We wanted this visit long ago to encourage and strengthen him and to tell the world that we have the champion who has set the pace and who needs to be encouraged and acknowledged.”

She urged the governor to use his office to get more women in leadership positions at the grassroots, including elective positions.

Reacting to the award, AbdulRazaq said the choice to work with women was borne out of his belief in women’s ability to multitask, their reliability, and their commitment to excellence.

“We have noticed in many things that women are very talented. They are good managers. They often think out of the box. They keep the home and working executive jobs, combining everything together. We thank our mothers, wives and daughters for their contributions to humanity.

“We truly appreciate your visits and your recognition of what we are doing. And for the honour you bestow on us, it will be an encouragement to my peers.”

AbdulRazaq commended the minister for the honour and how she kept making Kwara a reference point for gender inclusion, hoping to consolidate on such record in other key sectors of the economy.