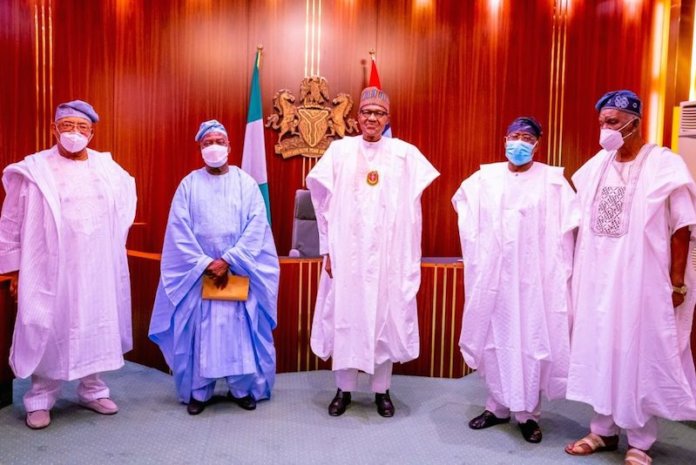 The leaders of Southwest in the All Progressives Congress (APC) have asked President Muhammadu Buhari to, as a matter of urgency, initiate the process of restructuring the country.
The leaders argued that restructuring would address structural imbalances fuelling agitation for a more accountable and transparent system.

This request was the fallout of the meeting the leaders had with the president at Aso Rock, Abuja penultimate week.
At the meeting were a former Osun State Governor, Chief Bisi Akande; a former Ogun State governor, Chief Olusegun Osoba; an APC leader in Lagos State, Prince Tajudeen Olusi and a renown medical practitioner, Dr. Abayomi Finnih.

THISDAY, however, learnt that the Southwest leaders ceased the meeting to discuss some grievous challenges that placed the unity of the country under undue strain and urged the president to take appropriate actions.

With the dynamics of the national security challenges, THISDAY gathered that the South-west pointed the attention of the president to the need to review the country’s governance structure to resolve the problems.

Also, the leaders discussed the efforts of the APC to address these challenges with its decision to set up a Committee on True Federalism under the chairmanship of Chief John Odigie-Oyegun.

“The committee, which was under the chairmanship of Nasir el Rufai, made far-reaching recommendations in favour of true federalism, fiscal federalism, resource control, state police, state court of appeal and independent candidacy, among others, which we have been clamouring for.

After the discussion, THISDAY learnt that the president agreed to look into some of the issues discussed at the meeting as a matter of urgency.
The report of the El-Rufai Committee, which was set up by the ruling party, had been submitted to the APC National Caucus and the party’s National Executive Committee (NEC).

Some of the key recommendations are resource control, making local government an affair of states, constitutional amendment to allow merger of states, state police, state court of appeal and independent candidacy.

According to its mandate, the committee was to distil the true intent and definition of true federalism as promised by the party during the last electioneering campaign, and to take a studied look at the report of the various national conferences, especially that of 2014; and come up with recommendations.

At the end of rigorous research, debates and deliberations, the committee came up with 24 items that Nigerians have indicated interest views that balance our federation.