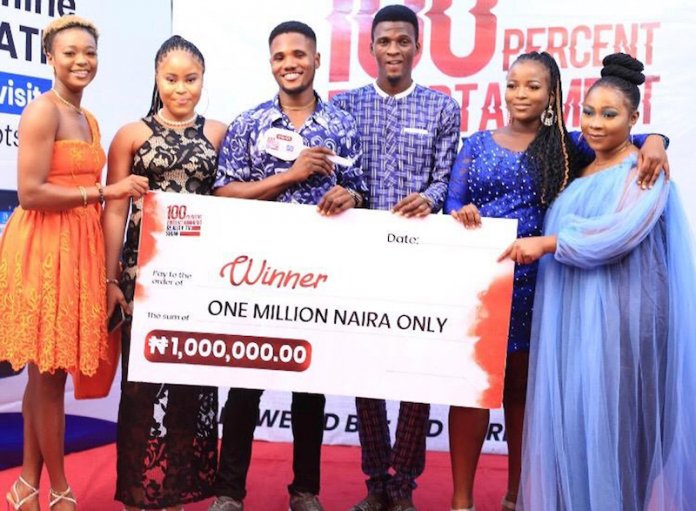 After weeks of skill and talent display, a winner has finally emerged in the maiden edition of 100 Percent Entertainment Reality TV show. The winner, Chukwuemeka Collins, better known as MOG, 22, won for himself N1 million and an official car, among other prizes.

Collins, who is a singer and rapper, beats over 100 other contestants to emerge the overall winner. 100 Percent Entertainment Reality TV show is a platform designed to promote talent in music, comedy, acting and fashion.

Speaking on the win, Collins said, “I am so excited to have emerged winner of this show. This is a big one for me and I am full of gratitude to the organisers. With this win, I believe that the sky is not my limit. I got to hear about the show on instagram and I applied.

“I was excited when I was called up, at first, I became tense but along the line I became more confident. I wish to dedicate my success to my family and all my fans that stood by me. Above all, I dedicate this feat to God Almighty. I cannot describe this feeling of success. I am overwhelmed!”

Founder and organisers of the TV show, Ken Bassey described Collins as a super-talented artiste who gave his best during the contest, adding that his platform, Dabinchi Global will do all within its capacity to take his career to the next level.

“It all began with online auditions on social media. The last men standing spent two weeks in booth camp during which they undertook various tasks after which Collins emerged winner. This is not just a one-off-thing but annual event.”

100 Percent Entertainment Reality TV Show is being powered by Red Carpet on TV Media while Kubeconcepts was the headline sponsor for the maiden edition of the show.