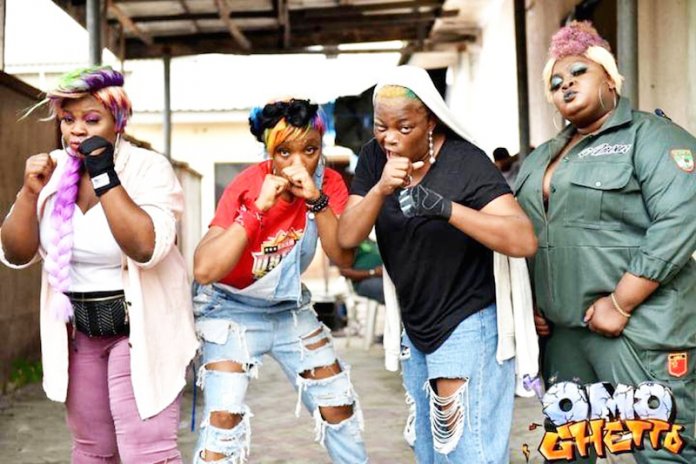 With a subtitle, ‘The Saga’, the official trailer for the forthcoming episode of the ‘Omo Ghetto’ series is stoking anticipation for the movie. Ferdinand Ekechukwu reports

Subtitled ‘The Saga’, Funke Akindele highly anticipated “Omo Ghetto,” is already making the rounds as one movie to watch out this festive season. The sequel which marks Funke and her partner/hubby, JJC Skillz first joint directorial debut, promises to be star studded as usual. The actress turned producer, in Omo Ghetto The Saga, reunites with Eniola Badmus who played the character Busty. Expectedly, the upcoming movie packs star cast. Same as the prequel, Omo Ghetto The Saga’s story follows Lefty and her friends, Nikky, Busty and Chummy Choko in Askamaya Ghetto.

According to Funke, Naira Marley will make a cameo appearance. The actress confirmed casting Marley in the film earlier in the year. Ten years after returning to set, Funke filmed some of the scenes in Dubai. The official trailer which was released last weekend stoked anticipation for the movie. The dramatic teaser gives glimpses of what’s to come and the drama that will unfold. You wouldn’t be surprise seeing fans of the superstar actress hum the movie soundtrack. ‘Emi lo mo ghetto…Lefty Omo Ghetto…I was born in the ghetto…’

The original Omo Ghetto tells the story of twin sisters reunited by series of dramatic twists. The film’s plot is woven around two twins (played by Funke as Ayomide and Lefty) who are separated at birth. Twenty years later, both are living two completely different lives. One is a ghetto kid and leader of a notorious female gang. The other, a pretty rich girl is raised in affluence and has anger issues.

The very popular ghetto twin is daring and ridiculously uncouth in her manners while the rich kid’s temper almost results in the death of her fiancée. This incidence made her go into hiding for fear of being jailed.

The ghetto twin and her gang are apprehended on their way to unleash terror on an unsuspecting victim. The fact that Funke actually played the ghetto girl that awesomely is a very good one. Characters like Lefty, Nicky, Busty and Omojoyibo all did their part in showing the other side of life you don’t wanna be against. The slum board was complete with Adebayo Salami playing the role of ‘Someone else’s father’ Funke for her creativity and trying to step out of the box, shone through.