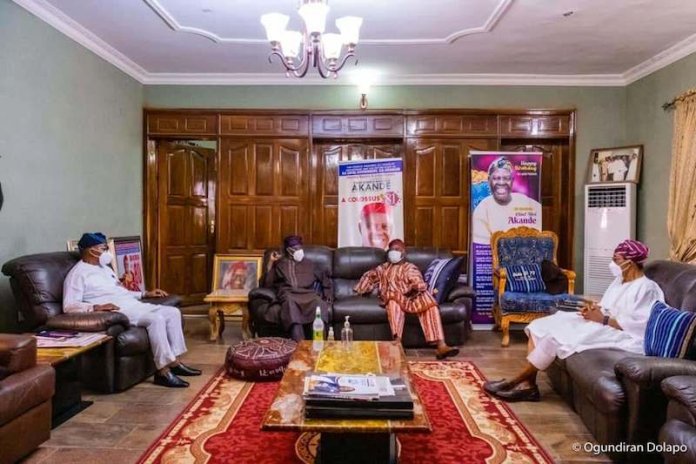 It was gathered that the meeting, held in Akande’s Ila Orangun residence, was to broker peace between Oyetola and Aregbesola.
The relationship between the two had gone sour, creating tension in the state.

Oyetola, who was Aregbesola’s chief of staff when he was governor, was on a collision course with the minister last week over attempts to mark what the former governor’s group called 10 years of progressive politics in Osun State, which coincided with the second anniversary of the present administration in the state.

The controversy generated by the clash in programmes prompted the minister to shelve his planned visit the state.
However, Aregbesola’s group shelved its programme following the intervention of critical stakeholders in the state.
On his Twitter page, Aregbesola said he arrived at the state with his entourage from the Ministry of Interior to commence engagement meeting with different stakeholders as directed by President Muhammadu Buhari.

He said: “Our entourage paid a courtesy visit to our leader and father, Baba Bisi Akande, alongside Governor of Osun State, [Mr.] Adegboyega Oyetola in Ila Orangun. Baba advised us on #EndSARS, insecurity amongst other issues.”

However, details of the meeting were yet to be made known as at the time of filing this report.
The Peoples Democratic Party (PDP) had last week warned Aregbesola to stay away from the state to prevent a breakdown of law and order.

The party also claimed Osun residents had suffered enough because of maladministration of the former governor and do not deserve to be put through the harrowing experience of security breakdown, adding that the proposed visit by the minister to the state was a ploy to cause mayhem.

A statement by the Deputy National Publicity Secretary of the party, Prince Diran Odeyemi, obtained by newsmen in Osogbo called on security operatives to pay more than passing attention to the planned visit by Aregbesola purportedly to mark 10 years of the return of progressive administration to the state.

“It is more than mere coincidence that Rauf Aregbesola decided to mark 10 years of his administration on the very day his successor, Oyetola, wanted to celebrate his second year administration. It is obviously meant to test power and popularity with the use of thugs and hooligans,” PDP had said.