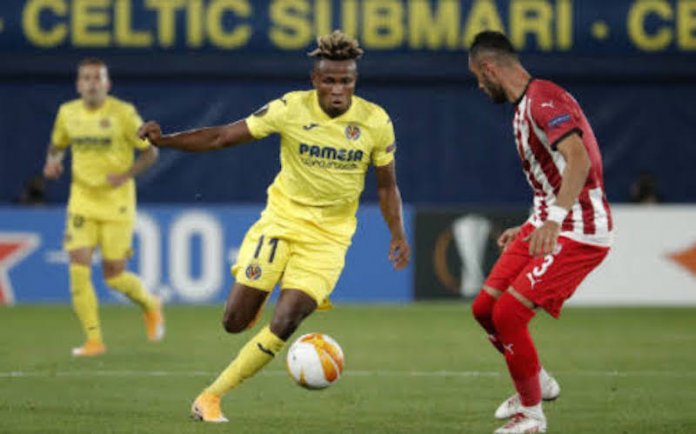 Samuel Chukwueze grabbed maximum points for Villarreal last night against Turkish club Sivasspor to lead the YellowSubmarines on 13 points into the Round of 32.

The Super Eagles winger snatched the winner in the 75th minute and was substituted a minute later.

Villarreal were followed into the next stage of the Europa League by Israeli club, Maccabir Tel Aviv who played one-all with Qarabag Fk to finish on eight points going into the Round of 32.

Elsewhere last night, another Super Eagles forward, Kelechi Iheanacho was on for all 90 minutes as Leicester City lost 1-0 to Ukrainian side Zorya Luhansk.

Iheanacho’s compatriot, Wilfred Ndidi who has been sidelined for two months due to groin injury was on for 57 minutes and showed why he remains one of the best holding midfielders in the English topflight.

Sitting in midfield alongside the equally industrious Hamza Choudhury, the 23-year-old Ndidi was exceptional and early in the match helped Pereira on the right by breaking up a possible Zorya attack.

Ndidi’s performance last night must have brought smiles to the face of Brendan Rodgers as his Nigerian ‘war horse’ returns to check Foxes leaking middle.

The Foxes twice came close to scoring in one move 10 minutes from time when Zorya goalkeeper Nikola Vasilj extended himself to block shots from Iheanacho and then substitute James Maddison. Vasilj then threw himself to his right to keep out Cengiz Under’s 20-yard strike.

Leicester’s hopes of sealing top spot in Europa League Group G with a game to spare were dashed by Zorya Luhansk’s late substitute Allahyar Sayyadmanesh who grabbed the late winner.

A win would have been all but enough for the Foxes, but they might now have to defeat AEK Athens in their final match to ensure that top status.

In Austria, substitute Dele Alli scored from the spot as Tottenham secured a place in the Europa League knockout stages despite LASK earning a late 3-3 draw.

Alli’s penalty, after Johannes Eggestein had levelled with six minutes left, looked to have won it – only for Mamoudou Karamoko to curl in late on.

Son Heung-min then put Spurs ahead before the late flurry of goals.

Tottenham are through with a game to spare but will need to beat Royal Antwerp at home next week if they are to progress as group winners.