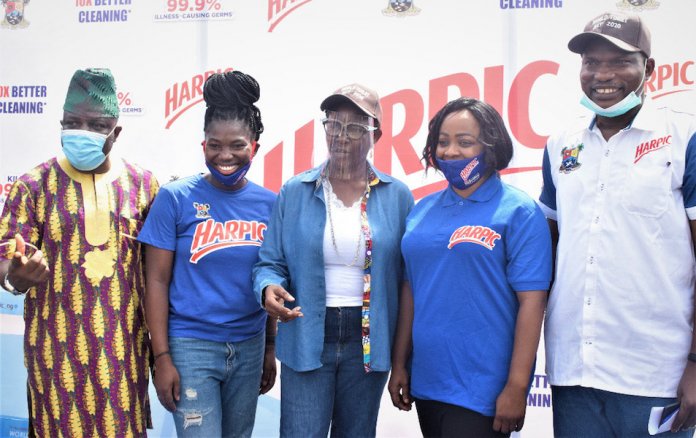 As Nigeria, last week, joined the rest of the globe to mark the 2020 World Toilet Day, Martins Ifijeh writes on the need to tackle the sanitation crisis, push to achieve Sustainable Development Goal 6, as well as support the roles played by organisations like Reckitt Benckiser in addressing the public health challenge

Last year, the Minister of Water Resources, Suleiman Adamu mentioned that Nigeria ranks highest globally on open defecation, an index that suggests the country is still lagging behind in achieving Sustainable Development Goal Six – Clean Water and Sanitation for All by 2030.

What seems to be the new worry is that the number of persons and households engaging in the act in Nigeria are increasing by the day. For instance, as at October 2020, reports show that 112 million persons in the country do not have toilets of their own, a situation that has largely led to open defecation among the citizens.

Globally, 673 million people engage in the practice with over 80 per cent of the figure in only seven countries, including Nigeria; a pool that has no doubt led to myriads of health challenges for the country, including diarrhea, cholera, among others.

To be clear, open defecation is the human practice of passing out faeces in the open – away from toilets, especially on fields, bushes, forests, ditches, streets, canals or other open space.

Many however do these because they do not have toilets readily accessible or due to cultural practices. Experts believed the practice has a huge link to child mortality, poor nutrition, poverty and large disparities between the rich and the poor; a narrative that spurred the United Nations to include SDG 6 in global goals by 2030.

According to WHO, 58 per cent of all cases of diarrhea worldwide in 2015 were caused by unsafe water, poor sanitation and poor hygiene practices, such as inadequate hand washing. This resulted in half a million children under the age of five dying from diarrhea per year.

To address this, the UN established the World Toilet Day commemorated every November 19 as part of measures to celebrate toilets and raise awareness of the 4.2 billion people living without access to safely managed sanitation across the globe. The day often buttresses the reasons why actions must be taken to tackle global sanitation crisis and as well as discuss models on how to better achieve SDG 6. This year, the theme remarks the importance of sustainable sanitation and climate change.

As part of measures to tackle the scourge in Nigeria, Harpic, one of Nigeria’s leading toilet cleaning brands from Reckitt Benckiser, in partnership with the Lagos State Ministry of Environment and Water Resources, refurbished and upgraded 47 public toilet units in six communities. It believes if the country must reduce its unfortunate ranking on open defecation globally, citizens must have access to toilets, as well as water which is an essential factor in proper defecation process.

Sharing his thoughts during the commemoration of this year’s World Toilet Day and the flagging off of the ‘Clean Lagos: Use the Toilet’ campaign last week, the Country Manager, RB Hygiene West Africa, Mr. Asif Hashimi said for Nigeria, the increase in sanitation crisis, high ranking on open defecation, obvious global warming, and the dearth of toilets has spurred Reckitt Benckiser to beam its light into addressing the gaps as well as inch the country towards achieving SDG 6.

He is of the view that everyone deserves sustainable sanitation, alongside clean water and hand washing facilities to help protect and maintain health security and stop the spread of deadly infectious diseases such as COVID-19, cholera, diarrhea and typhoid, among others, adding that with the presence of toilets, the country can as well fight climate change as wastewater and sludge from toilets contain valuable water, nutrients, and energy for the boosting of agriculture, reduction and capturing of emissions for greener energy.

As part of its recent contribution, the organisation, in partnership with the Lagos State Ministry of Environment and Water Resources has refurbished and upgraded 47 toilets in Oshodi, Ojota, New Garage, Apapa, Costain, and Leventis in Victoria Island; a move the state government believed would in no small measure reduce open defecation in the cosmopolitan city.

It is believed that this would in no small measure push the state towards achieving SDG 6, as well as aid in reducing the health challenges caused by lack of water and improper sanitation in the cosmopolitan city.

Hashimi said the refurbished toilets at the six communities would help reduce the number of Nigerians engaged in open defecation, adding that, “We are reiterating Harpic’s commitment to changing the stories surrounding open defecation and toilet sanitation in Lagos and Nigeria in general. The brand is interested in tackling the challenge of open defecation in Nigeria as a way of ensuring healthier and happier lives for the people.

“At the moment, Nigeria ranks first among countries practicing open defecation globally. This ‘stigma’ can only be removed if we all join hands to work towards this goal. Harpic’s purpose is to help Nigerians access hygienically clean toilets and also be an enabler for change in the fight for improved sanitation in Nigeria. The Harpic toilet refurbishment project will inspire a big positive attitudinal change, which will impact the lives of the people and the environment. It is about taking action to tackle the global sanitation crisis and achieve SDG 6: water and sanitation for all by 2030.”

He said: “Sustainable sanitation begins with a toilet that effectively captures human waste in a safe, accessible, and dignified setting. The waste then gets stored in a tank, which can be emptied later by a collection service, or transported away by pipework.

“The next stage is treatment and safe disposal. Safe reuse of human waste helps save water, reduces and captures greenhouse gas emissions for energy production, and can provide agriculture with a reliable source of water and nutrients.”

“Part of the brand purpose is to help Nigerian consumers get access to hygienically clean toilets and also be an enabler for change in the fight for improved sanitation for all Nigerians.

According to experts, providing sanitation has been estimated to lower the odds of children suffering diarrhea by seven to 17 per cent, and under-five mortality by five to 20 per cent.

World Toilet Day exists to inform, engage and inspire people to take action toward achieving this SDG 6. The UN General Assembly declared World Toilet Day an official UN day in 2013, after Singapore had tabled the resolution. Prior to that, World Toilet Day had been established unofficially by the World Toilet Organisation (a Singapore-based NGO) in 2001.