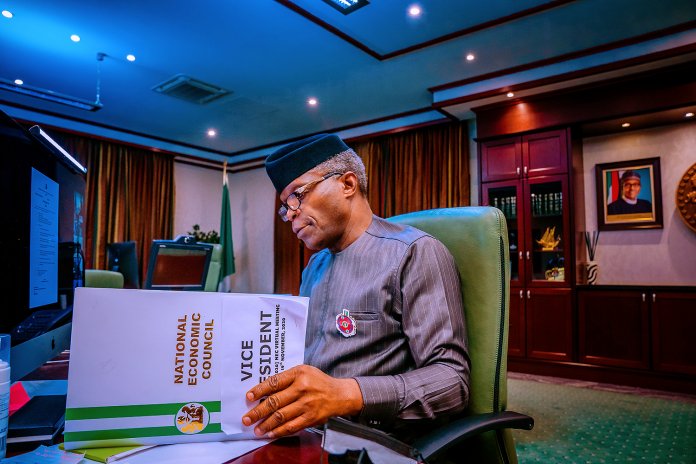 More highlights of the Finance Bill 2020, approved by the Federal Executive Council (FEC) on Wednesday, were unveiled yesterday at a virtual National Economic Council (NEC) meeting presided over by Vice-President Yemi Osinbajo.

Presenting the bill to NEC, the Minister of State for Budget and National Planning, Mr. Clement Agba, said the bill provides tax reliefs to companies that donated to COVID-19 Relief Fund on the platform of Coalition against COVID-19 (CACOVID).

The bill also guarantees a reduction in import duties on motor vehicles for transportation of goods from 35 per cent to 10 per cent.
It reduces levy on motor vehicles (cars) for transportation of passengers from 35 per cent to five per cent as well as duties on tractors from 35 to 10 per cent.
It exempts small companies with less than N25 million turnover from payment of two per cent education tax under the Tertiary Education Trust fund (TETFUND).

It stipulates a 50 per cent reduction in minimum tax from 0.5 per cent to 0.25 per cent for gross turnover for financial years ending from January 1, 2020, to December 31, 2021.
A statement by the vice president’s media aide, Mr. Laolu Akande, said the bill recommended that only compensation for loss of office up to N10million will be exempted from tax, adding that it is the employer’s obligation to account for tax on payments relating to compensation for loss of office.

“Prior to the Finance Act 2019, compensation paid to an employee for loss of office over and above N10, 000 was subject to capital gains tax. There were two notable issues with the provision: “The introduction of software acquisition as qualifying capital expenditure to improve the ease of doing business.

“It raises compensation exemption threshold and qualifies software acquisition for capital allowance,” it stated.
The statement said the minister reported to the council balances in the accounts of the federation as at November 17, 2020, comprising: excess crude account ($72,409,970.48); stabilisation account (N49, 151,181,622.35); natural resources development fund (N155, 530,778,234.58).
The statement added that the ad hoc committee constituted by the council, chaired by the vice president, to engage youths and other critical stakeholders in addressing the deeper roots of the #EndSARS protests presented its report to NEC.

It said the committee was mandated to engage the youth, religious organisations, civil society groups and security agencies regarding emerging issues and recommend effective solutions towards strengthening national unity, among others.

According to the statement, Osinbajo briefed the council on the committee’s resolutions.
The resolutions are: “There should be two broad levels of engagement, one with states and the second at zonal levels.
“All governors should commence engagement within a week. Guidelines of the engagement process should be developed.
“Engagement to include meetings with the youths and community leaders et cet era; the focus to be on young people.
“Engagement process to be flexible taking into consideration the peculiarities of individual states.

“The VP office to develop and forward engagement guidelines. Zonal engagement to commence on the 14th of November.
“The zonal meetings to be attended by committee members, including the governors.
“Governors to identify the various groups to be invited to the meetings.”
The statement said the council later resolved that the planned zonal engagements should focus on youths and civil society organisations exploring issues or jobs, and employment.

“Similarly, the states level interactions should proceed in places where this has not been reported,” it added.
According to the statement, the council was also briefed on new trends on food prices by Senior Special Assistant to the President on Agriculture, Dr. Andrew Kwasari, who stressed the need for urgent remedial measures.
It said: “Council received the presentation on the above subject matter with current food price situation analysis showing that food prices have changed between September and November, involving commodities in Lagos and a few randomly selected states.

“The hike in prices is due to the following factors: Delay in going out to the farm, which translates to delay in harvesting courtesy of COVID-19 pandemic.
“EndSARS protest stalled food transportation and delivery and in some instances destroyed food stores.
“Banditry in the North-west effectively preventing farmers from harvesting fields cultivated.

“Farmers/herders conflict destroyed farm produce in some states and increased cost of transportation.”
Akande said the council resolved that states and the federal government should adopt urgent measures, including social protection schemes to deal with the situation.
It added: “The federal government will also pursue the implementation of its ESP -Agric plan and others to positively improve the situation in the sector.”

The statement said NEC also received an update on COVID-19 from the Director-General of the National Centre for Disease Control (NCDC), Dr. Chikwe Ihekweazu.
According to the report, as at last week, there were 1,058 confirmed cases in 25 states with Lagos accounting for more than 47 per cent of them.
The report said Lagos, Federal Capital Territory (FCT), Oyo, Kaduna, Rivers and Plateau States accounted for more than 80 per cent of the cases in the last week.