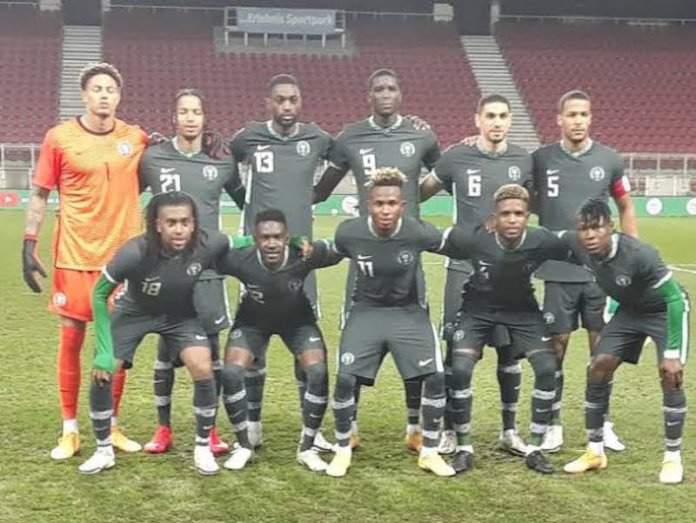 As Super Eagles line up against the Leone Stars of Sierra Leone inside the Siaka Stephen Stadium in Freetown this afternoon, the ghost of Nigeria’s defeat 19 years ago will come flooding back to memories. The casualty of that defeat in World Cup qualifier was Dutchman, Johannes Bonfrere who got fired from the Eagles post.

That sad defeat which had been consigned to history was unfortunately resurrected by the 4-4 draw in Benin City last Friday. It now has buoyed Leone Stars to the effect that they are capable of upsetting the three-time AFCON champions.

In the first 30 minutes of the Match-day three of the AFCON 2022 qualifiers, Gernot Rohr was brimming from ear to ear on the sideline as his wards raced to four goals advantage. All appeared well until the tide changed. The visitors did not only cancel Nigeria’s advantage in 14 minutes, only providence ensured that the memory of Samuel Ogbemudia who the newly refurbished stadium is named after was not desecrated with defeat.

This unpredictable nature of Eagles appears to be the reason most Nigerians will be on edge, watching Rohr call the shots from the sideline this evening in the Match-day four fixture that may turn out the decider of the fate of the Franco-German coach on the job.

Will Eagles save Rohr’s blushes by winning all three points at stake to extend Nigeria’s lead at the top of Group L to 10 points? Already, the country’s Sports Minister, Sunday Dare, has said in plain terms that anything short of outright victory will not be acceptable. It is not that a draw or defeat of Nigeria will spell doom for Eagles’ qualification as two match days still lie ahead in the new year, the fumbling and wobbling of the team under Rohr has become unacceptable to the generality of football followers in the land. He’s still experimenting five years after he took charge of the team.

Like Bonfrere, Sierra Leone may turnout the ultimate decider of Rohr’s fate with Nigeria.

Without Napoli frontman, Victor Osimhen to spearhead Nigeria’s attack, the task appears a daunting one. Osimhen dislocated his shoulder in Benin last Friday and had to be excused from today’s game.

Will Samuel Chukwueze, Paul Onuachu, Alex Iwobi, Kelechi Iheanacho and Ahmed Musa live up to the task of lifting the mood of Nigerians by winning this afternoon?

Vice Captain of the team, William Troost Ekong insisted before departing Benin that he is counting on the never-say-die Nigerian spirit for Eagles to win in Freetown to book their place at the 2022 AFCON in Cameroon.

“It is our ‘Naija’ spirit to overcome and succeed,” he tweeted.

“Hungry and ready for redemption Tuesday,” concludes the Watford defender on Monday morning.

Similarly, Chukwueze remains confident that Nigeria will return from Freetown with all three points in the bag.

”We have put the disappointment of last week’s draw behind us and everyone is looking forward to Tuesday’s game,”Chukwueze stated after the team’s last training session.

“What is important now is for us to beat them right there in Freetown and we are ready for the task ahead,” boasts the Villarreal winger in the Spanish topflight.

Super Eagles who were subjected to another round of Covid-19 tests on arrival in Freetown on Monday afternoon are leading Group L with seven points from three matches while Benin Republic are second on six points. Sierra Leone are third with two points and Lesotho are at the bottom having recorded a point.

The top two teams will advance to the tournament proper in Cameroon.