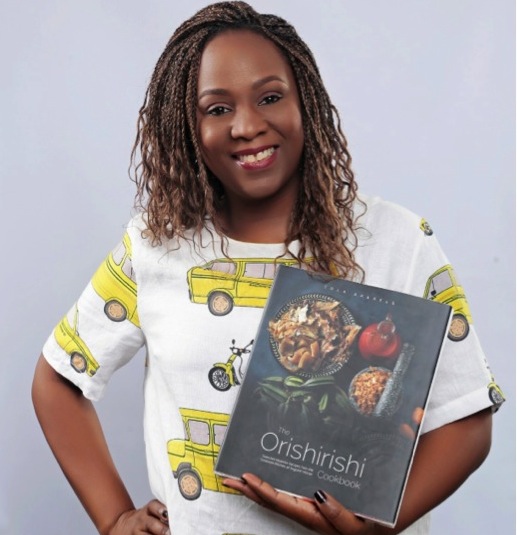 An accountant, interior designer, arts and culture connoisseur, now a cookbook author? Vanessa Obioha writes about the Co-Founder of Bogobiri House, Tola Akerele, a woman of many aspirations that celebrates African arts and culture

By a stroke of luck, famous interior designer, Tola Akerele, held the sixth edition of her iDESIGN Art, a platform that offers affordable art to clients. Three weeks after she showcased artworks of established and up-and-coming artists, President Muhammadu Buhari announced the lockdown of the country due to COVID-19.

Like all of us, Akerele who is the Co-Founder of Bogobiri House, the vibrant art and culture scene tucked in Ikoyi, Lagos, found herself locked in but not locked out of ideas. While still carrying out her designing job for clients remotely, she hatched the idea to write a cookbook.
“I work in an environment that is very Nigerian focused. Bogobiri is very Afrocentric. It’s a place where we promote music and culture. And then in the Orishirishi Kitchen, we have people coming to ask for local dishes. All of that was impactful in putting this book together,” she explains during an afternoon interaction with her.

The new cookbook, ‘Orishirishi,’ is a colourful detail of her discovery of sumptuous Nigerian meals. Orishirishi in Yoruba means an assortment of different things. Akerele does justice to the name by offering a myriad of traditional food and ingredients used in making them in the cookbook. It is a totality of the Nigerian cuisine, though soups from the south-south and south-east are more prominent.

The meals contained in the cookbook are based on the menu of her Orishirishi Kitchen, a restaurant that offers the best of Nigerian cuisine. Opened in 2017, the restaurant parades traditional Nigerian food. Think of the seafood okra soup, popular in the riverine areas, or edikaikong, the leafy soup from the Efik and Ibibio tribes (Akerele confessed it’s one of her best soups), all of these are contained in her cookbook.

“My work at iDESIGN takes me to many parts of the country. I travel a lot to the east. And as I was thinking about opening up the Orishirishi Kitchen, it just makes so much sense to have all these amazing soups from the east. Growing up, I didn’t really have an appreciation of them as I have for the south-west soups, egusi and efo-riro. But this really caught my eye. It opened up a whole new world of amazing soups from the east. And that’s really how the kitchen began. It was drawn from the desire to extend the menu and showcase Nigerian food in totality, not from the south-west region only.”

The diverse soups featured in ‘Orishirishi’ also alludes to the setting of the kitchen: Bogobiri. A common saying about the Afrocentric venue is that there is no stranger in Bogobiri. With ‘Orishirishi’, one can enjoy any Nigerian meal regardless of their race or tribe.
But, the cooking guide is not all about the recipes. Each featured food tells a story about Akerele’s discovery of the menu. For instance, her discovery of edikaikong was when a chef from that region prepared it for her. Native soup, a popular delicacy in Rivers State is now on her favourite soup list after a trip to Port Harcourt.

“I was in Port Harcourt and someone told me about native soup. What is native soup? What do they mean by native soup? I asked but they told me that is the name of the soup. I tried it and I can tell you it’s my favourite soup now,” she enthuses.
As someone with an eye for beauty and intricate details, ‘Orishirishi’ comes with eye-pleasing texts and photos. One of the astonishing elements is the food map which details the origin of the food.
“It is something I added later on,” she says. “I didn’t really plan to have the food map but I thought it would be nice to have a map to show where each food is from.”

There is also a section dedicated to African stockist. What the graduate of Economics and Politics did was to research where ingredients of the meals can be sourced from in different parts of the world.
“So you can have someone in Canada who wants to make this soup. Where do they get their ingredients from? I have to research to find out where they can get them. I wasn’t planning on doing that but I really wanted to share our food with other people in other parts of the world. Our food is very rich and because we have a strong cultural heritage, it unites us as a country. So it’s not about I’m from south-west or south-south. We are one Nigeria. I just want people to go on an adventure with the book,” she admits.

Akerele’s love for food is ingrained even though she left Nigeria when she was eight to study in the UK.
“People thought it was scary. I was leaving my family, my country behind but for me I was excited. It was like an adventure. I enjoyed every bit of it. It gave me a sense of independence,” narrates the Ondo State indigene.

She only visited Nigeria for holidays back then, limiting her appreciation of Nigerian soups to the south-west region. She would return to the country in 2003 after working a few years in investment banking. However, her adventurous trips broke whatever barriers that existed.
“I always love food. My family loves food. So I have always enjoyed eating, not only in Nigeria but food from different parts of the world. I travel a lot so I just like that new experience of meeting people, eating something new. It’s important to me and feels like education.”
Quite a few will be surprised by her new adventure as she is different things to many people. Some know her as the award-winning interior designer who is the brains behind the architecture firm, iDESIGN. Others will recall her as the convener of iDESIGN Art Festival where anyone can purchase an artwork without planning a ‘Money Heist.’ There are those in the interior designing team who recognise her as the woman who sits on the board of the Interior Designers Association of Nigeria (IDAN).

In other quarters, she is known as the co-founder of Bogobiri. Others simply know her as the woman who runs the Orishirishi Kitchen. In the Christian circle, she is famous for running the Christian charity programme, Alpha Nigeria. Now, she will be known as the author of a new cookbook. Is there an end to her aspirations?

She laughs. “I think I’m fortunate to do things that I’m passionate about. All the things I do, I like doing. I feel very fortunate.”
“My work is in finance,” she adds. “It’s something I did earlier on when I got a degree in Economics and Politics from Bristol University. It’s something that makes sense to go into and I’m grateful for that initial training, I think it probably sets me up for this. So I’m grateful for that training but this is definitely what I feel I’m meant to be doing. Everything is related to what I like, culture and lifestyle. They’re all sort of related.”

Though she has her finger in every cultural pie, Akerele grasps for words when describing herself. Energetic? She wasn’t too sure. She asked her PR Officer, Reni Sota-Matanmi, to help her out.
“Culturally-inclined,” Reni says.
Akerele nods in agreement. It suits her!