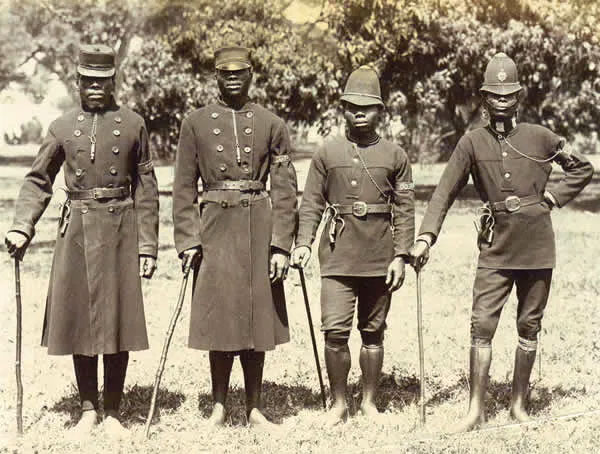 To understand why the Nigeria Police Force behaves the way it does, looks no further than the history of its creation, writes Tobi Soniyi

Some researchers have argued that the British colonialists bequeathed on us a police force that is not fit for purpose.
To understand why members of the Nigeria Police Force behave the way they do, a brief history of how the police came into being in Nigeria is instructive.

According to Prof. Etannibi Alemika, an expert in police reform, studies on the evolution and the role of colonial police in the country found that the police forces established by the colonialists in various parts of the country at different times between 1861 and 1960 were organized and deployed as
occupation force to suppress the indigenous Nigerian peoples as the colonizers exploited their resources to develop their own countries.

Police in the Colonial Era
A report jointly authored by the Network on Police Reform in Nigeria and Open Society Justice Initiative, states, “Colonial authorities used the police prin- cipally to control local communities and tamp down any challenges to colonialism. Colonial police earned a reputation for the brutal subjugation of communities and suppression of resistance to colonial rule.The foundations of the NPF’s brutality were laid during the colonial era.”

This view is corroborated by Alemika who contended that:
“An adequate analysis of the problems and challenges of any police force should start with the appreciation of the history and dynamics of its development. History of the police forces in the country indicates that the various forces were established, organized and maintained by colonial and post-colonial governments primarily for order maintenance that engenders repression, a culture of impunity: corruption, incivility, brutality, lack of transparency and accountability.”

The country known as Nigeria is made up of different ethnic nationalities (more than a hundred of them). These ethnic nationalities were conquered by the British at different times and over a long period of time (1861-1903).
Alemika said: “The colonizers executed the colonial project employing violence and fraud or deceits. Nigeria’s constituent nationalities were conquered at different periods. As a nationality is conquered British colonial presence is established by establishing a police force for the territory. Second, violence and fraud were employed in the conquest of the nationalities. Consequently, the colonizer feared resistance and police forces under various names were established and employed as an instrument of violence and oppression against the indigenous population.

During the colonial period, most police were associated with local governments (native authorities). In the 1960s, under the First Republic, these forces were first regionalized and then nationalized. The British merged Lagos colony and the southern and northern protectorates in 1913 and named the new colony Nigeria. The northern and southern regional police forces were later merged, in 1930, to form the colony’s first national police – the Nigeria Police Force (NPF).
Another author, O.F. Onoge, states that the police in the consciousness of the people became the symbol of the dictatorial establishment rather than the protector of the people’s rights.
He said: “As the people had no checks over the arbitrariness of the police, they either avoided police trouble or mediated inevitable contacts with bribe offerings. During the colonial period, police fright was a feature of popular consciousness.

Post Colonial
After the colonialists left, there was no attempt by the military to redirect and refocus the police.
When the country adopted a regional system of government, the local police existed side by side with the federal police. This stopped in 1966 when the local forces were disbanded as recommended by a panel set up in 1966 by the military regime of Aguiyi Ironsi.
The Committee or Working Party (also referred to as Gobir Panel, so named after its chairman) was requested to consider the desirability of dual (local and National) or centralized (unified) police and prisons service. The Committee submitted its report to the military regime led by General Yakubu Gowon (that succeeded Ironsi regime overthrown in July 1966) and recommended the abolition of local police forces and prison services.

According to the Federal Government of Nigeria (1967) Working Party Report, the local police forces were poorly trained, corrupt and used for partisan political purposes, including the repression of opponents, by traditional rulers and politicians in Northern Nigeria as well as by political parties and governments in power in the Northern and Western Regions.”
During the military regime, the police were suppressed. However, the police enjoyed a good relationship with the military under General Gowon (1967-1975). During that period the police were co-opted into governance by the military as state governors and members of the national ruling council. More importantly, the police were respected as partners by the military rulers.

However, the police were not so lucky under the military during the 1983-1999 era. The police lost its high profile and prominence in government, although it continued to be incorporated as junior partner as state governors.
However, the force as an organization was neglected in terms of funding and equipping. The military feared that a strong police force might constitute a threat to the Armed Forces, especially by acting as a counterforce during military coups.

Rather than equipping the police to serve as the primary tool for promoting and protecting internal security, the military governments resorted to establishing special task forces with army and police personnel. Each unit of such was led by a soldier, often junior in rank to the police on the task force. This demonstrated the subordinate role assigned to the police.
It should also be noted that recruitment and promotion in the police force were largely suspended by the military government. This resulted in shortage of personnel.

The return to democracy in 1999 opened a new vista for the police.
The new Constitution creates the NPF as a federal institution and prohibits the existence of state or other police bodies.
The constitution contains provisions on the Nigeria Police Force, the Police Council and the Police Service Commission.

Section 214(1) of the 1999 Constitution provided that:
There shall be a Police Force for Nigeria, which shall be known as the Nigeria Police Force, and subject to the provisions of this section, no other police force shall be established for the Federation or any part thereof.
The functions of the Nigeria Police Force were specified in section 4 of the Police Act (Laws of the Federation 1990)13 as:
1. Prevention and detection of crime.
2. Apprehension of offenders.
3. Preservation of law and order.
4. Protection of life and property.
5. Enforcement of all laws and regulations with which they are charged.
6. Military duties within or without Nigeria as may be required of them.
In addition to the constitution, the principal legislation in Nigeria governing the operations and functions of the police includes the following:

• the Police Act,150 and subsidiary legislation made under it
• the African Charter on Human and Peoples’ Rights (Ratification and Enforce- ment) Act151
• the Criminal Procedure Act applicable to the 17 states in southern Nigeria152
• the Criminal Procedure Code applicable to the 19 states in northern Nigeria and to the Federal Capital Territory of Abuja153
• the Police Service Commission (Establishment) Act of 2001
• the coroners’ laws of the respective states of Nigeria.
First enacted in 1943 as the Police Ordinance and last updated by military decree in 1967, the Police Act is the principal instrument that establishes and regulates the structures, functions, and powers of the NPF.
However, the Police Act was recently amended and replaced by the Police Act 2020 which introduces some new features that promise to revolutionise policing in the country.
However, the Court of Appeal has voided some of its provisions.

Administration
The Nigeria Police Force has staff deployment across the 36 states of the country and the Federal Capital Territory (FCT). The command and control of the Nigeria Police Force is under the Inspector General of Police. For administrative ease, the Force is divided into seven (7) administrative departments, viz. Finance and Administration; Operations; Logistics; Force Criminal Investigation Department; Training; Research and Planning; and Information and Communication Technology, each headed by a Deputy Inspector General of Police. The Force is further divided into 12 operational Zonal Commands (usually comprising between two and four State Commands) and 37 State Commands including the FCT (usually comprising Area Commands which further comprises Divisions). While the zone is headed by an Assistant Inspector General of Police, the State Command is headed by a Commissioner of Police, the Area Command by an Assistant Commissioner of Police and the Division by any officer in the Superintendent cadre.