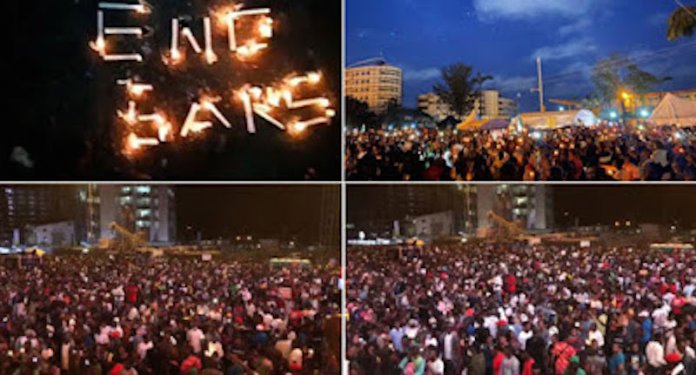 Agbo Agbo urges the Nigerian youth to urgently explore avenues of engaging and educating the street kids
I love documentaries. Whenever I’m not reading, writing or studying, I often indulge myself, especially with the ones that task the brain. I’ve been enriched watching barriers broken and the impossible made possible. It all starts from the mind. In essence, someone thought or dreamed about something and strive to make the thought or dream a reality. He sees a picture first in his mind before it materialises. That is how powerful pictures are.

I’ve watched how the tallest bridge in the world was built; how engineers bore a tunnel through some of the hardest rocks in the world in the Swiss Alps using an incredible machine known as ‘Tunnel Boring Machine’ (TBS). This machine can ‘chew’ through rocks. I have watched how a four-lane underwater highway was built in South Korea and an airport on the sea in Japan. I’ve also watched how the English Channel was conceived and constructed; and how both the Suez and Panama canals were built. There are many more that pushed the boundaries of impossibility.

So, what’s the nexus here? Someone puts pen to paper or ruler/pencil to paper to first design the concept and every other thing falls into place. The thought or dream leaves the metaphysical realm into physical reality we can see, use and touch. Today, people pass through tunnels in the Swiss Alps and English Channel. They drive through a four lane underwater highway in South Korea; they land on an airport built on water in Japan, they drive on the tallest bridge in France. The innovations go on and on to show the ingenuity of the human mind.

For 12 days in October 2020, those we often call ‘disconnected’ Nigerian youth, were shown a picture they’ve never seen before. That picture birthed hope and a future that is not as bleak as they had previously thought. And what a picture it was! Like the COVID-19 pandemic, no one predicted the #EndSARS protests that rocked the nation to its foundation. The genie is out of the bottle never to be forced back again. Nigeria has changed forever and you’ll be naïve to think otherwise.

With this lovely picture the youth practically formed an “alternative government” using ideas and organizational skills. So wonderful was it that most that attended were reluctant to go back to the “country” they came from until soldiers dispersed them with bullets. This was too good to be true for most of them. They were well fed. They were motivated to shoot for the sky. They request for ambulances and it was provided! They request for legal assistance, and pronto, it was there! Mental health experts were on ground to guide against depression! They looked out for one another. Most important of all, there was daily accountability! A rarity in the “country” they came from.

The “finance ministry” of the #EndSARS protests said it raised N147.85 million and spent just N60.4 million, a fraction of which was expended on consumables. Yet there was so much for some young people to eat and drink that they wished the protests would last forever.

On the flip side, the picture the youth have of their “country” is that in which billions of Naira was earmarked for COVID-19 palliatives, yet the palliatives were nowhere to be found until looters descended on some hitherto hidden warehouses to loot the palliatives. So, the picture in their minds now is what would have happened if the “finance minister” of #EndSARS was given the responsibility of managing the COVID-19 palliatives? With what they saw with their eyes – not what they were told by spokesperson – help would have reached the vulnerable of our society. The “minister” and his “staff” have proven their expertise in running efficient services in different areas of our national life in just 12 days. They are thus ready to dispense with the old and its corruptive tendencies and embrace the more efficient new.

The trigger for all this was the dreaded – now disbanded – Special Anti-Robbery Squad (SARS) of the Nigeria Police which was allowed to go rogue and became a law unto itself. Instructively, the increase in the price of fuel did not push the youth to the wall neither was the hike in electricity tariff. They stomached the excruciating poverty they swam in with grit. But, it was the blood of the many innocent souls murdered extra judicially by the dreaded SARS that became the tipping point.

But sometimes, the instruments of darkness tell us some good truths. SARS has yielded a beneficial dividend. The upheaval of spontaneous nationwide citizen protests revealed the power of contradiction as a force of history. A concerted series of protests against a rogue police formation has ended up as a great galvanizer of youth energy across the nation and beyond.

In all these, it is important to sieve the wheat from the chaff considering the mayhem that was unleased on our nation by sponsored thugs and hoodlums when the state wielded the big stick on the #EndSARS protesters. The rage of the streets that we witnessed in some areas is a totally different picture.

This second picture – a very ugly one – was shown to “the street” regarding their “country” and “leaders.” They hear and they know their leaders have and nurture corrupt tendencies. But suddenly “discovering” warehouses across the country where COVID-19 palliatives were stored while people were starving break their hearts. Unfortunately, “the street” can be blood thirsty and irrational, devoid of reasoning unlike the #EndSARS protesters. The street is driven by hunger and poverty. It is mainly concerned with filling its stomach first before any other thing. It was therefore not surprising there has been a “gold rush” for the discovery of warehouses across the country, even at NYSC camps.

Fueled by rumours and personal vendetta from mischief makers, the search for warehouses by “the street” sadly moved to personal properties of politicians, and to properties of hard working normal citizens. There were videos on social media where the houses of politicians and citizens were looted and touched by these hoodlums. In most of these instances, law enforcement agencies are nowhere to be found.

My fear is this: let these lootings not become the norm just like kidnapping for ransom is now part of our “conflict economy.” Recollect that kidnapping began as part of agitation for resource control in the Niger Delta when only expatriates were the victims. With fewer expatriates on the plate it has now grown to the monster that has impoverished many innocent Nigerians who have lost loved ones or sold properties to pay kidnappers.

Since “the street” is often irrational, all it needs is for someone to pinpoint a company’s warehouse as one used for storing palliatives and it would be decimated in minutes; same may apply for private warehouses as well. This is a road we should not even contemplate travelling on because it would be the road to all out anarchy.

October 2020 was a unique month. Two pictures were shown to Nigerians; one was beautiful, the other ugly. One was a picture of hope, motivation and limitless possibilities; it “can do” spirit propelled Nigerian youth to demand for a nation where they can explore and deploy their youthful energy for the betterment of society. They dreamt and put it into action and those in authority noticed and quavered.

The other picture was a very ugly one. Hoodlums unleashed a reign of death, terror and destruction on the country. These, some say, are the political thugs and miscreants created by the system to wage war against political rivals. Now they have been let loose to torment us all, and it was quite an ugly picture.
The way forward is for the Nigerian youth to begin to urgently explore avenues of engaging and educating “the street” by letting them know that the fight is more for them than even the youth. Though misguided and misdirected, they remain Nigerians. We cannot have a sane and safe nation without them. Our youth need to engage them, and fast. That’s one of the lessons of October.
Agbo, a communications and public analyst, wrote from Lagos

Quote
October 2020 was a unique month. Two pictures were shown to Nigerians; one was beautiful, the other ugly. One was a picture of hope, motivation and limitless possibilities; it “can do” spirit propelled Nigerian youth to demand for a nation where they can explore and deploy their youthful energy for the betterment of society…