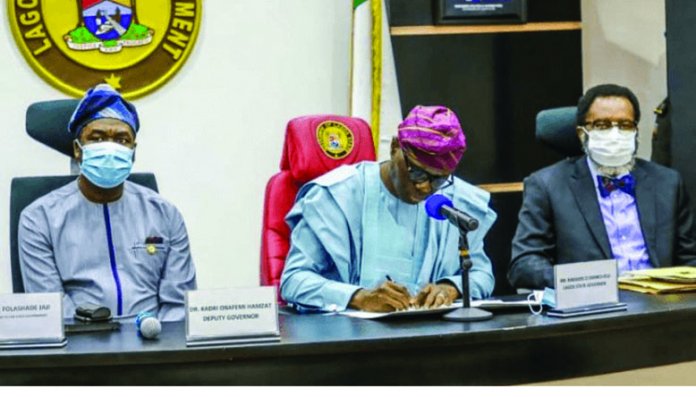 Anger, destruction, deaths and pains typify the aftermath of the recent ENDSARS protest in Lagos and now is the time to bury the hatchets, give peace a chance and rebuild the state. Shola Oyeyipo writes

Memories of the #ENDSARS protests will remain sweet, sour, and bitter depending on which side of the divide you are. It’s sweet because the Nigerian youth woke from their slumbers to hold government accountable, for the protesting youth. It is sour because due to the organic nature of the protest, they lacked leadership and exit strategies and so, it was hijacked. For the government and other businesses, it was bitter, because the destructions left on the trail of the protests are humongous.

Now that the protests are over, the Lagos State Governor, Mr. Babajide Sanwo-Olu is now saddled with the task of rebuilding the massive destruction, however, with the support of the entire state. Thus, last Wednesday, he signed an executive order to ensure that the project commences in earnest and also set up an eight-man committee headed by the Chairman, Citibank of Nigeria, Yemi Cardoso to oversee the initiative.

Lagos is perhaps the worst hit by the protests that spread to other states of the country. An investigation by THISDAY puts the number of lives lost at 62 and it estimated that over N1trn might be required to rebuild property destroyed by hoodlums, after hijacking the protests from the irate young Nigerians, who took to the streets demanding a better deal from the government.

Some hoodlums also headed for the administrative building of the Nigerian Ports Authority (NPA) during the protest, vandalised and razed down no fewer than 60 vehicles.
The Lagos State Commissioner for Information, Gbenga Omotosho, said 84 BRT buses were destroyed in all. 27 of these buses cost $200, 000 each, and 57 of them cost $100, 000 each, bringing the value to about N3.9bn.
Police authority also noted that 25 of their stations were razed in Orile, Amukoko, Layeni, Ilasamaja, Ikotun, Ajah, Igando, Elemoro, Makinde, Onipanu, Ebute Ero, Pen-Cinema, Isokoko, Alade, Cele, Igbo Elerin, Shibiri, Gbagada, Onilekere, Makoko, Daleko, Asahun, Makinyo, Amuwo-Odofin, Anti-Kidnapping, Surulere.

Though the Ojo, Ojodu, Mowo, PPL, and Morogbo police stations were not burnt, they were terribly vandalised.
In his quest to embark on the huge money-gulping reconstruction, Governor Sanwo-Olu made remarkable statements that were very important to underscore. He tactically pointed out that this period, when nations and governments at all levels were wriggling out of the economic hardship that came with COVID 19, it was not the best time to invest so much on wasteful destruction.

But like the proverbial king palace that must be given a better facelift after it was burnt, this serves as an opportunity to rebuild some part of the old Lagos.
“In these challenging but interesting times, we realise that we have the potent opportunity to reform our state and upgrade our structures. Out of the despair and challenges of the Coronavirus Pandemic and the destruction of our public assets comes a glimmer of hope,” Sanwo-Olu said.

The Lagos governor considered this as an opening for his government to set the pace for the transformation of Lagos State, stressing that, “The Committee will have a profound effect on how quickly and efficiently we are able to rebuild our state and restart our socio-economic growth.”
Another concern the governor subtly addressed was the need to sustain the harmonious relationship among the various ethnic groups resident in Lagos, because at a point during the violent protests, some elements introduced ethnic and tribal sentiments.

To that extent, Sanwo-Olu enjoined every Lagos resident to join hands with him to rebuild the state, adding that the people should eschew any action capable of sparking ethnic division among the people of the state.
He said: “At the center of this decisive action to rebuild our state is the need to closely work with the people and organisations, who call Lagos home – those who believe in the Lagos Dream, those who share our collective vision of a mega-city that thrives on peace and unity among all ethnic groups, those who know that the future of Lagos is tied to our ability to keep nurturing our state,” adding that, “Lagos took pride in the ability of several ethnic nationalities to peacefully cohabit while resiliently pursuing their personal goals and ambitions.”

However, the good news from the governor was that since the incident, the state has received local and international offers of assistance to rebuild and recover what was lost to arson and violence in October and that justifies his position that, “We can no longer wait to begin the onerous task of reconstructing Lagos State.”

So, when the government sends its bill to the Lagos State House of Assembly to establish the trust fund to rebuild the ruins of Lagos and commences the project, it would be expected that the unity of purpose that has always been the tradition in the state would be brought into it.

One important observation, however, is that while the governor has continued to find ways to pacify the obviously angry Lagos youths, who are asking to know who actually ordered the shooting at the Lekki Toll Gate, a good number of Lagos youths are still not pacified. But it is important to give peace a chance and allow the Lagos Judicial Panel on SARS to complete its assignment.

The governor recently hinted that, “The scope of the panel has been expanded to cover the Lekki toll incident”, and urged that memoranda could be submitted to the panel by aggrieved members of the public.
The good thing is that the duo of Rinu Oduala and Majekodunmi Temitope, has been selected as youth representatives on the panel and added to that is the fact that Sanwo-Olu recently listed 20 cases related to unlawful killing that are against police officers.

“We have expanded the terms of reference for the Judicial Panel of Inquiry and Restitution to include the incident at the Lekki toll gate. If you have any claims, do send them to the panel. The panel will begin to sit on Monday at the Lagos Court of Arbitration situated in Lekki.

“Going forward, we have to renew our commitment to peace, progress, social cohesion and make a promise to ourselves that never again shall we allow the forces of darkness take over our land”, Sanwo-Olu vowed, stressing, “Because this is our land!”

Since the governor has “apologised for every action and inaction”, and he is making efforts to rebuild the massive needless destruction in the aftermath of the protest, it will only be good if the people meet him in the middle, follow up on the legal procedures for seeking redress and allow the state to bounce back. Importantly, a case should and must be made for the police officers, extra-judicially killed during the protests by hoodlums.