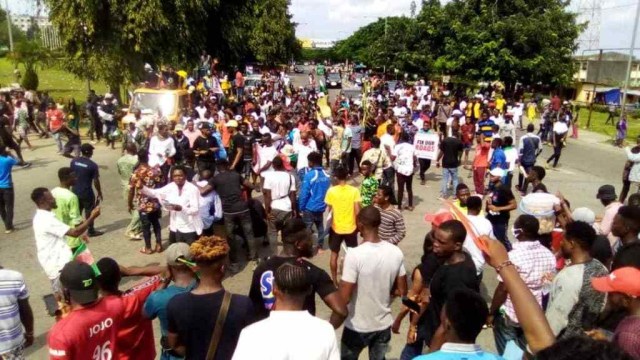 The recent ENDSARS demonstrations in the FCT and other parts of the country which was hijacked by hoodlums and other criminal elements to attack and vandalize government establishments as well as privately-owned properties and businesses is one ugly incident that no well-meaning Nigerian would want to experience again in a hurry.

As it happened, while youths around the country were engaging in peaceful protests to demand for an end to police brutality as well as the reform of the security agencies, some hoodlums among the youth population took advantage of the situation to launch devastating attacks on government and privately-owned businesses and properties.

In the end, several storage facilities and warehouses belonging to government and private businesses in several parts of the FCT and other parts of the country were vandalized, looted and set ablaze by the rampaging youths, leading to the loss of billions of Naira worth of goods and properties, destruction of means of livelihood and the regrettable loss of lives of other Nigerians.

Much as the intention of the protesting youths and the call for an end to police brutality is quite noble and commendable, the same cannot be said about the activities of the hoodlums who have brought untold hardship to other Nigerians.

For instance, the estimated cost of the losses suffered by private business owners and government in the FCT have been set at billions of Naira. The means of livelihood of most Nigerians in the areas most affected by the unrest have also been destroyed leaving them in ruins.

As the FCT Minister, Malam Muhammad Musa Bello confirmed when he carried out an on-the-spot assessment of the affected areas in the FCT alongside the traditional rulers and FCT Security Taskforce, the fate of several businesses in the affected areas are now hanging in the balance and would require urgent intervention by government to ensure that they do not completely collapse.

In Apo District, for instance, several car stands belonging to businessmen were set ablaze while warehouses at the Idu Industrial Estate, the commercial nerve centre of the FCT were vandalized, looted and destroyed. The FCT Grain reserve which also housed farm inputs meant for distribution to the FCT farmers have also been completely looted.

This begs the question, in whose interest are these rampaging hoodlums carrying out these attacks? Certainly, it cannot be the interest of the Nigerian youths whose means of livelihood have now being destroyed, rendering them jobless.

Again, the public institutions that have been vandalized, the police outposts, the hospitals, the schools, the banks, the grain reserves, are these not all facilities established to serve members of the communities, majority of whom are the youths? Who then would suffer the consequences?

Another angle to this unrest is the fact that widespread social discontent as was witnessed recently during the ENDSARS demonstrations, is one that is capable of snowballing into large scale breakdown of law and order, which could eventually leave us with even bigger problems, if not well managed. A country like Nigeria that is already experiencing cracks along ethnic and religious fault lines surely cannot afford to have situations that would widen these cracks.

Much as there are numerous reasons to be angry and discontented as a Nigerian youth, there is need however for the youths to exercise restraint and abandon whatever ruinous path that they may have been instigated into by external forces.

The youths spoke very loudly and clearly during the peaceful protests and their messages have been heard by government as have been attested to by various officials of the government. The government has also begun to show more responsibility towards the plight of the youths with the recent disbursement of N30,000 grant to artisans in the country, among other efforts.

The next best option now is to begin to dialogue with the government to see how the demands made by the youths during the protests could be met. Continued acts of destruction and vandalism by the youths would only lead to the loss of goodwill which could defeat the purpose that the peaceful protests were set to achieve.

Again, all well-meaning Nigerians, including the traditional institutions, the religious bodies, government officials and even youth leaders are calling on the youths to embrace the path of peace and dialogue. The youths must now listen to these wise counsels as it is only under an atmosphere of peace that any meaningful development could be achieved.

The youths in the FCT must also resist any attempts by external forces to influence them into taking up arms against the state, private businesses or government institutions in the FCT.