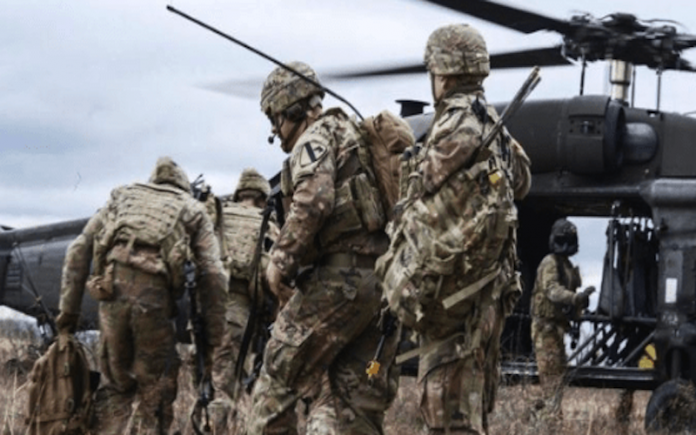 The ruling All Progressives Congress (APC) and the Peoples Democratic Party (PDP) yesterday engaged in recriminations over the rescue of an American hostage by the United States Special Forces in Nigeria on Saturday.

The PDP fired the first salvo, saying that the rescue mission confirmed that President Muhammadu Buhari could neither secure the territorial integrity of the nation nor arrest the insecurity ravaging the country.

But the APC fired back, accusing the PDP of playing politics with the country’s security.
The United States Government, working with the governments of Niger Republic and Nigeria, had rescued the American citizen, Philip Walton, 27, abducted last week in Niger but held hostage in Nigeria.

The daring high-risk U.S. military raid took place early Saturday morning in Sokoto State, according to sources familiar with the operation.
President Donald Trump, who tweeted the development as a show of support, however, called the operation a “big win” for the elite force.

Trump further announced in a tweet: “Last night our country’s brave warriors rescued an American hostage in Nigeria. Our nation salutes the courageous soldiers behind the daring nighttime rescue operation and celebrates the safe return of yet another American citizen.”
It is, however, not clear what form of support Nigeria rendered towards the rescue operation, as no official statement had been issued as at the time of going to press.

Efforts to get the presidency’s comments did not also yield any result.
Reacting to the incident, the PDP, in a statement described the situation where the US had to come into the Nigerian territory to pull a rescue, as an international embarrassment and also an indication of how low the Buhari’s administration had fallen in its failure to guarantee the safety of lives and property in the country.

The National Publicity Secretary of PDP, Mr. Kola Ologbondiyan, said the fact that under Buhari, bandits and abductors from neighbouring countries now freely cross into Nigeria to use the country as detention camps shows the failure of the Buhari administration to secure the national borders and territorial integrity.

It said: “It also shows that contrary to claims by the Buhari administration, parts of our country are still under the control of bandits and insurgents.

“It is indeed grossly disconcerting that under our commander-in-chief, a general who had consistently promised to lead from the front, it took a foreign country to come on our soil to rescue their citizen, while hordes of our citizens are reportedly being held, tortured and killed in various kidnappers’ and insurgents’ dens in various parts of our nation,” the PDP stated.

PDP recalled that earlier in April, Nigeria was equally embarrassed by reports of how Chadian President Idris Deby, personally led his troops to rout insurgents and freed Nigerian territories and soldiers held captive by terrorists in northern part of Borno State, while the Nigerian leaders recede into the safety and the comfort of the Presidential Villa.

According to the PDP, the fact that other countries with competent and determined leadership have successfully dislodged and vanquished bandits on the Nigerian soil highlighted the incompetence, lack of honesty and want of will power on the part of the Buhari administration to effectively secure the nation.

PDP explained that the exploits of these countries in the Nigerian territory show that the bandits, vandals, kidnappers, insurgents are not invincible but have been allowed to take hold of the nation due to the failures of the Buhari administration.
“Such failures had dragged our nation down to rank as the third country with the highest level of terrorism, after Iran and Afghanistan, according to 2019 Global Terrorism Index rating by the Institute for Economics and Peace (IEP).

“Our party believes that the latest experience will compel President Buhari to accede to widespread demand by Nigerians to rejig his security architecture as well as replace his service chiefs with more competent hands to effectively tackle insecurity challenge facing our country,” PDP stated.

However, PDP commended the courage and sacrifices of Nigerian troops who are daily risking their lives to safeguard the nation against the insurgents despite the challenges they face.

But the APC kicked against PDP’s criticism and accused it of playing politics with national security, describing its latest attack on Buhari as baseless and dull.
The Deputy National Publicity Secretary of the party, Mr. Yekini Nabena, in a statement yesterday, said combating terrorism and other emerging cross border crimes require international collaborations and assistance when necessary.

He noted that the president as the commander-in-chief of the armed forces swore a constitutional oath to protect lives and property of citizens and has consistently demonstrated that resolve throughout his administration.

APC added that Buhari’s reactions and actions after Dapchi schoolgirls’ kidnap was a pointer to how a responsive government should act.
APC stated: “The Peoples Democratic Party (PDP) in a statement on Saturday’s rescue of a kidnapped American citizen in Nigeria by US special forces has decided to rubbish our security services constantly putting their lives on the line to ensure our safety and secure Nigeria’s territorial integrity.

“The PDP again chooses to play politics with our national security in its tired, baseless and dull attacks of the President Muhammadu Buhari government.
“The PDP should explain to Nigerians how its immediate-past administration handled the 2014 abduction of 276 Chibok schoolgirls. To refresh the PDP’s memory, former British Prime Minister, David Cameron in his book, For the Record, said the Goodluck Jonathan-led government was ‘sleeping on the wheel,’ when the schoolgirls were abducted.”

The party said it was on record that the PDP government did nothing for two weeks after the Chibok schoolgirls’ abductions, dismissing it as a grand political conspiracy while the schoolgirls were continually held and their families suffered in anguish.
According to the party, while the PDP still refuses to take responsibility for the tragedy up till now, the same PDP government rejected the British offer to help in the rescue of the Chibok schoolgirls.