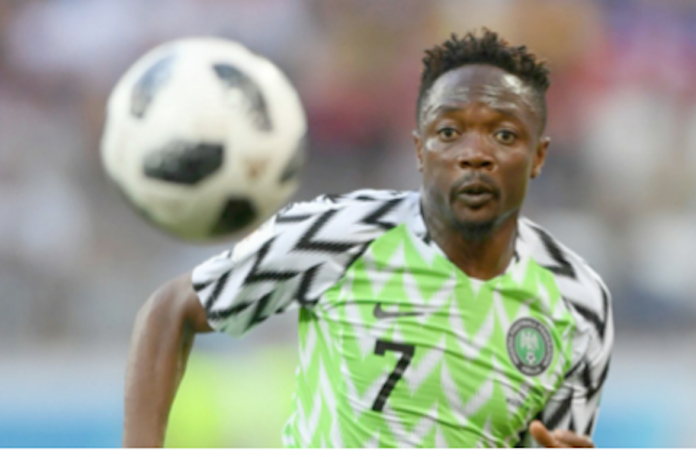 After mutually parting ways with Saudi professional league club, Al Nassr last Sunday, Ahmed Musa is eyeing a return to main stream Europe to continue plying his trade. Where next for the Super Eagles’ captain is however the big question

Musa, 28, is now a free agent and is reported to have parted ways with the club mutually as he hopes to continue with his professional career in Europe after two-year spell with the Saudi team.

In a post on Twitter on Monday, the Najd’s Knight established the jet-heeled forward’s exit while wishing him the very best.

“Thank you Nigerian falcon, wishing you all the best in the future Ahmed Musa!” Al Nassr tweeted.

Having completed his loan spell at CSKA Moscow, the Nigerian international joined the Asian outfit on a four-year contract from Leicester City.

Al Nassr beat several European clubs to the signing of the ex-Kano Pillars man who impressed at the 2018 FIFA World Cup in Russia with two goals in three matches.

Weeks later, he opened his Saudi professional league account with a hat-trick as his team hammered Al Quadisiya 3-0 at Riyadh’s King Fahd Stadium.

Musa is expected to announce his destination in the coming days.

Musa left for the Middle East in 2018 after failing to establish himself at the King Power Stadium where he played 21 Premier League matches in two years.

After scoring nine goals in 50 Saudi top-flight matches, the 28-year-old was becoming an household name in Saudi Arabia before opting to terminate his contract after Al Nassr defeat to Al Taawon on October 22.

In his chat with ESPN, the former Kano Pillars star had this to say:

“I have enjoyed my time in the two years that I have been here, and the club has been great to me.

“But I have always wanted to return to Europe, and I feel that this is the best time for me to make that move.

“I want to get back to playing at the top level again against the best players in the world.

“I would like to thank everyone at Al Nassr and all the fans for understanding and respecting my wishes, but especially for making me feel such a big part of the club and I will never forget them.”

Musa confessed to approaching the club management to terminate his contract before the close of the Saudi transfer window on Sunday.

“I met with the club and requested that they should terminate my contract, and they were kind enough to agree to let me go,” he added.

However, Mohamed Hamdy Ahmed who writes for Merca Today in the Gulf State, has given more details on Musa’s departure.

“There was great anger that caused this decision. The fans are sad about the player’s performance with the team.

“The fans were not satisfied with the level of the player so the management took this decision,” Ahmed said.
The Nigerian winger in 58 appearances scored 11 goals and got 14 assists, but it was not enough to impress Al Nassr and its supporters.

“I have information that he was given a paid leave until next January. And that the contract has not yet been terminated,” Ahmed added.

Musa, who recently surpassed John Obi Mikel as the third most-capped Super Eagles player having featured in the international friendlies against Algeria and Tunisia, and in the process got his 93rd Nigeria cap shot into international limelight after helping Nigeria U-23 win the 2010 WAFU Nations Cup where he scored goals against Benin Republic and Burkina Faso.

At the 2011 FIFA U-20 World Cup in Colombia, the former Kano Pillars man scored three goals in five matches and he was included by FIFA’s shortlist for the Adidas Golden Ball.

After representing the country at youth level, the ex-VV Venlo star made his senior debut on August 5, 2010 in the 2012 Africa Cup of Nations qualification against Madagascar – coming in as a substitute for Mikel in the 2-0 win.

Musa is now the third most capped Nigerian player after surpassing Mikel having featured in the international friendly against Algeria.

The 27-year-old came off the bench to replace Samuel Chukwueze in the 75th minute of the game.

Musa went into the game on 91 caps, level with the former captain, Mikel Obi, who quit international football after the 2019 Africa Cup of Nations.

His appearance against Tunisia five days after the Algeria’s took Musa’s Eagles appearances to 93.

The former Al Nassr forward is now only behind Joseph Yobo and Vincent Enyeama for number of appearances.

He spent four years in the Russian capital where he clinched three Premier League titles, and he teamed up with Leicester City in 2016.

In England, the Maiduguri-born forward struggled to gather first-team action with the Foxes which forced him to return to CSKA Moscow in January 2018 where he returned six goals in 10 league outings.

Musa’s exit might come as a shock to the Al Nassr faithful after the Nigerian star played the entire duration of their league defeat to Al Taawon on October 22.

Musa, indeed admitted that he did not get enough playing time during his time at Leicester City because of his former Foxes teammate, Riyad Mahrez after joining from Russia side, CSKA Moscow, for a club-record fee of £16.6million in July 2016.

The forward only managed two goals in 21 Premier League games for Leicester as he was behind Mahrez in the pecking order at the King Power Stadium.

“Before they signed me at Leicester City, they told me Riyad Mahrez was leaving,” Musa said.

“If I knew that Mahrez is going to stay, I would not join Leicester, and I would have remained at CSKA Moscow.
“When I came, we had a lot of wingers at Leicester City, yet, I still got the chance to play.”