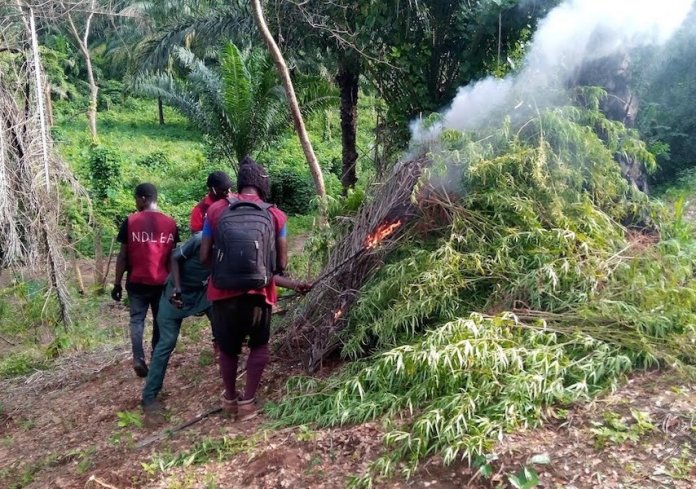 Ibrahim Oyewale who examines the adverse effect Cannabis Sativa pose on youths and the worrisome development that has seen Kogi State change from a transit point to a cultivating state, writes that the state Commander, National Drug and Law Enforcement Agency is tackling the menace one farm at a time

Despite the continuous effort by the federal government to wage war against the use of illicit drugs such as narcotic, cannabis sativa and psychotropic substances such as tramadol, Tutolyn, and others, some unscrupulous elements have continued to engage themselves in illegal cultivation of cannabis sativa in large quantities for commercial purposes across the country.

Cannabis Sativa, which is popularly known as hemp or marijuana is prohibited by law in Nigeria because of its adverse effect arising from the use and consumption on the socio-economic developnent of this great nation.

The agency saddled with the herculean task, the National Drug and Law Enforcement Agency (NDLEA) to combact the menace of the illict drugs in country has not for once left any stone unturned to ensure a drug -free society despite the complex nature of the fight against the drug dealers .

However, research has shown that the use of cannabis sativa otherwise known as Marijuana has both long and short term effects on the users. While some school of thought believe that it has medicinal value, others strongly argue that the consumption or frequent use has damaging consequences on the users than any good.

According to researchers, “it has been scientifically proven that marijuana over activates parts of the brain that contain the highest number of the receptors, part of which causes the “high” that people feel. Other effects are altered senses just like seeing brighter colours, altered sense of time, changes in mood, impaired body movement, difficulty with thinking and problem-solving, also resulting to impaired memory, hallucinations , delusions and psychcosis risk when consumed in high doses with regular use of high potency marijuana.

“Marijuana also affects brain development. When people begin using marijuana as teenagers, the drug may impair thinking, memory, and learning functions and affect how the brain builds connections between the areas necessary for these functions. Researchers are still studying how long marijuana’s effects last and whether some changes may be permanent.”

Prior to 2010 when cannabis sativa farm was first discovered at remote forests in Isanlu and Ife Olukotun , Yagba East Local Government area of Kogi State, the state was seen as then a transit point based on its strategic location as a gateway to both the Northern and Southern parts of the country.

Beside that, Kogi State has also been surrounded by somes states notorious for the cultivation of Cannabis Sativa in quantities, hence, the inflow of the substance was very easy. The tasks before the NDLEA then was limited to placing surveillance on the dealers and users, then arrest and seize the illict drugs, before counseling and prosecution of the drug addicts as the case may be.

During the period under review, the Kogi State Command of NDLEA made several arrests, seized thousands of cananabis sativa worth billions of Naira, secured many convictions through the Federal High Court saddled with responsibilty to entertain illict drugs and related matters. In addition to this, the national officers of NDLEA in collaboration with the state command and state government equally destroyed several millions of kilogrammes of weeds suspected to cannabis sativa.

The recent arrest of a suspected farmer, Ameh Joseph and subsequent discovery of over four kilometres stretch of cannabis sativa farm at Kara Forest in Agbokete Community , Akpanya district of Igalamela/Odolu Local Government Area of Kogi State may have exposed the state as one of cultivating states with inherent danger looming on the teaming youths if not nipped in the bud now.

With this startling discoveries, Kogi State NDLEA Commander, Mr. Alfred Adewunmi expressed worries over the sudden change in the status of Kogi State from transit point to one of the cannabis sativa cultivation states, trailing behind Edo, Delta, Ondo, Ekiti and Osun States in production capacity.

He said: ”I want to tell you that I am astounded, shocked and perplexed that something as huge and as enormus as this can be discoveredd in Kogi State. Our assumption is that Kogi State, even though it is surrounded by some states that are notorious for cannabis sativa cultivation , was simply a transit point because of the strategic location of Kogi State.

“However, to discover that within Kogi State we can have plantation of this huge proportion is something that has shocked me to the marrow. I will simply tell you it is very enormus plantations of cannabis sativa and it is not just one single farm land. Of course, all of you have been on my entourage and we have walked within this farm for over two, three kilometres and we are still within the farm.“

Adewunmi stressed further that it might be actually that the entire community has been engaged in cultivating of cannabis sativa here. “It looks as if the whole community is involved because a situation where three to four killometres of arable land are dedicated for cultivation of Cannabis Sativa, it has has become a community of Cannabis Sativa cultivation”.

“Rather than to encourage a situation where people are advised to go into cannabis sativa production believing it has medicinal value, I will rather suggest that our leaders encourage deep research into the properties of cannabis. When we are able to come up with undisputable conclusion about values that are inherent in cannabis, we will be able to proceed to say it is medicinal in specific terms and this is what it does for society. But of course till then I believe we should exercise caution“.

“Again, as you have seen, we will require to muster five times resources deployed today. We have nearly 80 people with us here to destroy this plantation but even with these 80 persons, they would not be able to complete the job. So there is still going to be need to come back here again and again for us to be able to completely destroy this farm. But as it is, I must commend that without the state government, we would not have accomplished this mission

On total estimate pf the farm lands and expected turnover , the NDLEA boss pointed out that It is going to be really unsciencific for him to just to say the exact number based on the large areas covered, noted that what the operatives of NDLEA saw here is far in excess 10- hectare of the cannabi sativa we discovered earlier on , in excess of 7.5-hectare of Cannabis Sativa discovered. If you put all of these together you will see we will talking over 35-hectare of Cannabis Sativa plantation. To begin to talk about the face value , “to be frank with you we are talking about N1.5 billion if successfully cultivated”, he added.

” I want to warn those who are into this business, that if you considered the distance we have to cover before we got here, the hidden nature of this environment particularly in the valley and the challenges we encountered in the process of getting here, it would appear that they have concealed their illict activitives well enough for anybody to discover it, but the reality is that we have found them out.

“There is no hiding place for any criminal. There is no hiding place for anyone who will still involve in the illicit cultivation of cannabis sativa. I want to advice as much as possible that Kogi State government is supporting what NDLEA is doing in the state therefore there will be no room for anyone to turn Kogi State into Canabis Sativa Cultivation State. We will not allow it.”

Adewunmi also advised the youths in the area to desist from engaging themselves in cultivation of marijuana, rather they dissipate their energies on rice, yam, cassava or garden egg plantation. He noted that he saw how well the garden egg was thriving and saw also within the farm were cassava was planted, which was doing very well.

“What happened is that the priorities of these misguided individuals was set wrongly. They should do the right thing and cultivate great crops that will benefit humanity. They will be able live a life that is worthwhile. The continuation of illicit planting of illegal cannabis sativa is not going to be a benefit for anyone.“

The 29-year-old suspect , Ameh Joseph, in an interview with journalists said he was the owner of a section of the farm, stressing that he ventured into cannabis sativa farming as a result of economic hardship. He further pointed out that he had once been employed as farm manager in charge of cannabis Sativa at Ogbese in Ondo State in 1995 with yearly salary of between N85, 000 and N100,000.

He noted that he returned and ventured into good business until recently when it nose-dived and he found alternative in the cultivation of cannabis sativa business. The suspect who was full of regrets said he would never go back to the business again , warning other youths not to be involved in such illegal business as it would backfire one day.

The father of two lamented that his wife and children deserted him when he was arrested and his aged mother have been left alone. “If I am out of this, I will return to a legitimate business. After all, I know much about fast food packaging. I have gone to beg for forgiveness a day after I was paraded and I will not go back to illict drug business”.