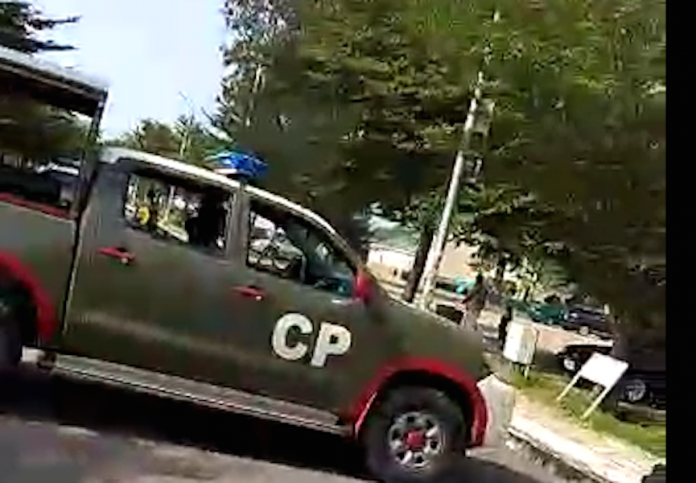 Gunshots rent the air yesterday as soldiers and policemen made spirited efforts to ward off hoodlums who invaded the National Youth Service Corps (NYSC) Orientation Camp in Kubwa area of the Federal Capital Territory (FCT), Abuja, carting away mattresses, utensils, electronics and other items.

Also, the Nigerian Air Force (NAF) and the air wing of the Nigeria Police also embarked on aerial patrol with helicopters to scare the invaders.

Three looters were also feared dead, while many sustained various degrees of injuries when Custom officers fired gunshots to disperse a crowd which invaded the Nigeria Customs Quarters in Gwagwalada, Abuja, with the intention to loot food aid that was allegedly hoarded in the premises.

THISDAY gathered that the Customs officers resisted the hoodlums who attempted to breach the gate at the quarters during the morning raid.

Calm was later restored when the looters scampered for safety when one person reportedly died on the spot and some people injured when the officers fired gunshots. Two victims were later said to have died from gunshot injuries.

The hoodlums were said to have invaded the Customs quarters believing that COVID-19 palliatives were kept on the premises following an earlier raid on the same Gwagwalada axis where they looted palliatives belonging to the FCT Administration.

Scores of hoodlums looted shops and also stole foodstuffs, mattresses, electronics and other items at the NYSC Orientation Camp in Kubwa.

Some of the looted items belonged to individuals quartered at the NYSC camp as no corps member was in the camp.

It was gathered that the miscreants stole textile materials, generating sets and computers from the shops opposite the NYSC camp.

The early raid prompted the police and the Nigeria Air Force to send helicopters to keep surveillance over the area, while a detachment of soldiers and policemen were sent to the scene to control the crowd.

The hoodlums, who were armed with machetes, jack-knives and clubs, also attacked residents of the area.

They blocked the road at about 9 am, turning back motorists while the Kubwa village market was immediately shut by its authorities to avoid any invasion.

The crisis at the NYSC camp forced some parents and guardians to evacuate their children and wards from schools.

Kuje town, the headquarters of the Kuje Area Council in Abuja, was also thrown into pandemonium as hoodlums, armed with sticks and knives blocked roads and patrolled the streets in search of any warehouse housing the COVID-19 palliatives.

Meanwhile, the Chairman of North East Commodity Association (NECAS), Mr. Sadiq Umar-Daware, has said hoodlums who took advantage of the EndSARS protests have carted away 110 new tractors and implements from the association’s warehouse in Yola, Adamawa State.
Umar-Daware, in an interview with News Agency of Nigeria (NAN) in Abuja, said the hoodlums also broke into the main warehouses of the Rice Farmers Association, Maize Farmers Association of Nigeria and made away with farm inputs.

He said the hoodlums broke into another warehouse filled with fertilisers and carted away bags and farm implements arranged for distribution to farmers to commence the planting season.

“Files for various programmes were destroyed and they made away with various documents,’’ he said.

According to Umar-Daware, NECAS has many tractors because it was incorporated to provide among other services, tractor leasing and mechanisation service for farmers.

“What they took away include tonnes of rice, beans, maize, sorghum and millets and computers, tables, chairs, office equipment, water dispenser and cash,’’ he said.

Umar-Daware said complaints were laid to some security agencies but they did not respond.

“Based on our own findings, they have kept some of the tractors in some people’s garages and when reports were made the response was not favourable,’’ he said.

Umar-Daware described the act as extremely dangerous and inimical to the mechanisation services to farmers and development agriculture aimed at ensuring food security.

He, however, urged people in Adamawa and its environs to be on the lookout for anybody in possession of the tractors and report to NECAS, RIFAN and MFAN officials for recovery and necessary action.