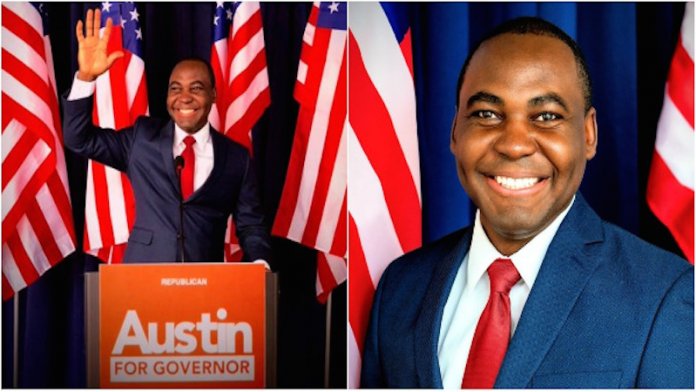 Benue State-born Nigerian-American, Austin Chenge, is focused on becoming the next governor of the state of Michigan, in the United States. The 34-year-old has all it takes to make history, writes Ferdinand Ekechukwu

Austin Chenge wears a grin. At a glance, his image simply gives away his effervescence. It is typical of him. His bio distinctively captures it and describes him as “ever-smiling and always a big dreamer who has always stunned critics by achieving what others consider impossible”. The 34-year-old Nigerian-American from Grand Rapids, MI. is the embodiment of the American Dream. This is a Nigerian making waves in the Diaspora, USA. It is a source of inspiration to others and a symbol that is changing the narrative of negativities Nigerians are known for abroad.

From Tiv tribe in Benue State, Chenge has always stunned critics by achieving what others consider impossible. He looks set to make history. Joining the race for the governorship position in the state of Michigan, the tenth most populous of the 50 states in the United States of America clipped him on the spotlight amid his recent reckonings.

A graduate of the School of Law at the University of Birmingham England, it is coincidental that he’s vying for the top seat at the 11th most extensive by area, being slighter larger than the United Kingdom and the largest by area east of the Mississippi River. The election is expected to hold in 2022. Chenge, who announced his intention to run for the next governor of Michigan in March 2020, is the first Republican to do so. He would be contesting against US Representative Lamar Smith, of the Democratic Party.

Chenge, who took to his Twitter page to make the call on well-wishers to pray for him as he joins the race for the governorship election in 2022, said he would be addressing Michigan natives and residents in a video broadcast. “Please pray for me. Next month, in a Video Broadcast, I’ll officially address everyone who’s a Michigan native or resident, those at home and those living across our State borders”. God bless. Austin Chenge, #Veteran and First #Republican Candidate for #Governor of #Michigan 2022.”

Earlier, Chenge the Entrepreneur and Conservative Republican had vociferously twitted: “We are at #war. The enemy is tyranny. The public face of that enemy is the #Dictator formerly known as Gov #Whitmer of Michigan. Never give in. Do not be obedient. Resist at every opportunity. By all means necessary. Together we will take back control of #Michigan…”
Buoyed with creativity, Chenge is popular locally for designing the popular tricycle, known as “Wazobia tricycle”, in 2016, to improve the lives of peasant farmers all over Africa.

Since 2018, he has been serving with the US military as a specialist. He is decorated with the Achievement Medal as a Distinguished Honour Graduate with a Culmulative Grade Point Average (CGPA) of 99.8% and for exceptional performance while on active duty.
Austin has always stunned critics by achieving what others consider impossible. Austin raised over $200,000 in funding for his first startup, Holla@Me/Holla.com (now sold) in England and soon expanded to San Jose in California. He created Waving in a social networking environment in 2011, a concept later seen on Facebook’s Wave.

In May, Chenge promised to pardon those convicted of violating the present governor Whitmer’s COVID19 Orders if elected, amid other promises. He will introduce the biggest tax cuts in Michigan history. Cut government spending and keep money in the pockets of Michigan families and hardworking Americans. Create mental and psychological emergency care units across Michigan, and provide better access to healthcare and education. It doesn’t end there. He will also defend Michigan constitution, their inalienable rights, their unborn citizens and American family values.

While he would immediately cut funding to sanctuary cities, repeal the pension tax fund and post-apocalyptic roads, his intended policies are worth highlighting as he pledges to do the following without fear or favour: Defend American Constitution and introduce constitutional carry (i.e the carrying of a handgun, openly or concealed, without a license or permit); fight for the rights of our unborn children, and put Americans First; Immediately cut funding to all Sanctuary cities; a promise to introduce a two-year freeze on residential property taxes and extend it until the House brings me a bill that drastically lowers the rate.

If elected, Chenge also promised to create Mental and Psychological Emergency Care Units all across Michigan for better healthcare access including Anxiety, Depression, PTSD, Opioid Use Disorder and more; ensure our God given American values, including Bible classes are taught in our schools, and our children have access to skilled trade training; Lift the ban on baiting and allow local authorities the latitude to regulate this.