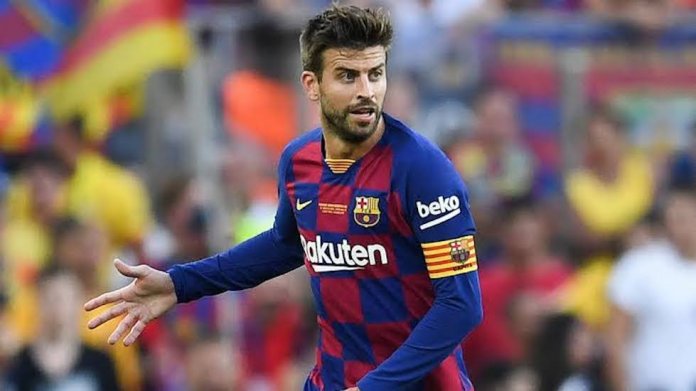 Gerard Pique has reportedly found himself at the heart of a dressing-room split at Barcelona after going behind his team-mates’ backs to sign a new contract.

The Nou Camp giants are in a cash crisis amid the coronavirus pandemic, with under-fire President Josep Maria Bartomeu doing all he can to balance the books in his final few months in the role.

His goal in the coming weeks, as reported by Marca, is to lower the wages of the first-team squad by 25 per cent while promising them an improved salary in the latter stages of their deals – something of a ‘poisoned inheritance’ for the next president.

While most of the players signed a letter refusing to negotiate with the board, Pique has now gone against the grain and signed his new contract, something which is said to have infuriated the rest of the dressing room.

Ter Stegen and De Jong had refused to sign the letter from the beginning, instead opting to go their own route to renew their deals, while Pique’s situation is more intriguing given that he did sign the letter, only to go back on his word.

Wednesday was expected to be the day that Barcelona begin their attempts to secure the salary reductions for the squad, so it comes as no surprise that they have announced the four new contracts just hours before talks get underway.

In March, Messi announced players had accepted a 70 per cent pay-cut so non-playing staff could remain employed during the pandemic.

“If we didn’t speak until now, it’s because the priority was to to find solutions to help the club and to see who the most affected were during this situation,” he said

“For our party, the moment has arrived that, the cut will be 70% of our wage during the state of alarm. We will also help out the club in order for the workers to be paid 100% of their wages.”

Now, with further cuts required after Barcelona posted losses this summer of £88m, the squad is being ‘torn apart’ by the ‘split’ over who opposes the proposed salary changes.

Marca refer to the technique as ‘divide and rule’ as the board attempts to create a split in the squad, and the paper report that there are ‘huge’ cracks forming in the dressing room.

It marks the latest episode in a particularly tense year for a dressing room now on their third manager.

Relations between squad and board soured in February when Messi took aim at then director Eric Abidal over comments that players had pushed to have Ernesto Valverde sacked.

Abidal claimed in an interview that ‘many players were not satisfied’ with Valverde and so his position had become untenable – something Messi felt was a direct attack on the character of the players.

Messi posted: ‘I honestly don’t like doing these things but I think everyone has to be responsible for their tasks and take care of their decisions. The players [have to be responsible for] what happens on the pitch and we are the first to recognize it when we did not do things well.

“Those responsible off the pitch must also assume their responsibilities and above all take responsibility for their decisions (…) I think when he [Abidal] talks about players, he has to give names because if not he is tarnishing everyone and fueling speculation that is not true.”

Pique described it as ‘rock bottom’ and called for a ‘complete rebuild’ on and off the pitch to rid the club of the toxicity that dominated the previous months. It came across as a direct attack on Bartomeu.

“The club need changes and I’m not talking about the coach or any one player,” he said. “The club needs profound change. We have hit rock bottom. We need to reflect and do what is best for the club.”

Messi gathered his thoughts in the weeks that followed and made the power-play to inform the club he planned to exercise his clause to leave his contract for nothing, paving the way for a move to Manchester City.

It was the biggest story at the club in more than a decade and yet the rest of the dressing room, aside from Jordi Alba, Luis Suarez and Arturo Vidal, were stunningly silent at the news Messi wanted to leave.

Pique as a senior player was anticipated to side with Messi but he was noticeably quieter than when Neymar was planning to leave for Paris Saint-Germain. The lack of fight to axe the board and keep Messi was striking. In Spain, the silence in the dressing room said it all.

Vidal and Suarez were eventually moved on and Messi’s ‘clan’ has shrunk massively in the dressing room, with Alba now his closest confidante.

Prior to Messi’s interview where he revealed he would, begrudgingly, respect the final year of his contract, the club was embroiled in yet another controversy.

El Mundo reported that the Catalan police force filed a report to the judge investigating Barcelona’s hiring of social media consultancy I3 Ventures to monitor its online presence that concluded ‘possible economic crimes’.

The allegation, according to El Mundo, is that Barcelona paid up to 600 per cent above the going rate for the services of I3 Ventures who were employed to monitor Barcelona’s social media.

On the pitch, Barcelona began their Champions League campaign with a 5-1 victory over minnows Ferencvaros on Tuesday night.

Despite riding their luck early on, Ansu Fati, Messi, Trincao, Philippe Coutinho and Ousmane Dembele all scored at the Nou Camp in an emphatic victory.

Things went from bad to worse for Pique, meanwhile, as he conceded a penalty and was sent off in a moment of second-half madness.