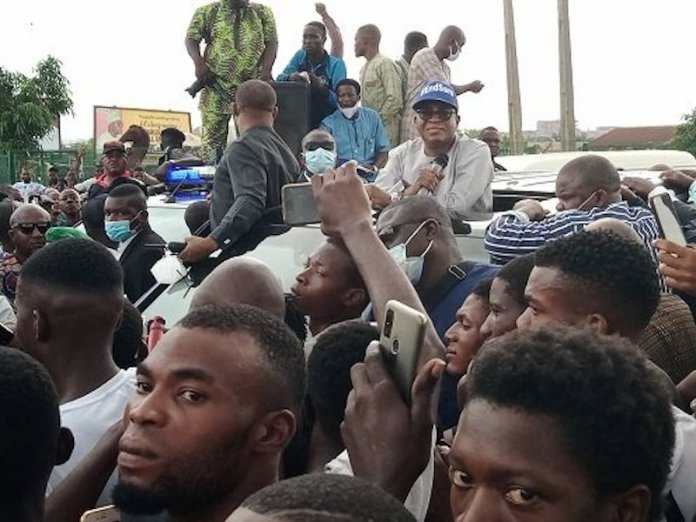 · No life was lost to the accident, says LASEMA
· NNPC commiserates with victims, Lagos

A tanker laden with premium motor spirit (PMS) yesterday exploded on Otedola Bridge in Lagos State, making it the fourth time such disaster would occur on the same spot in recent times.
Unlike previous incidents, the explosion, which occurred at about 3:00 a.m. on Saturday, did not claim any human life, though goods and property worth millions of Naira were lost to the incident.

However, the Lagos State Emergency Management Authority (LASEMA) has ascribed the incessant tanker explosions on the bridge to road design defects, which should be corrected to avoid unnecessary loss of life.
Findings yesterday revealed that the explosion occurred after a truck conveying fabrics from Lagos developed brake failure and collided with the tanker laden with petrol motor spirit on the bridge.

During a visit to the scene of the accident, an eyewitness account disclosed that the explosion “gutted a stationary tanker with Number Plate KBG91XA. The tanker was conveying PMS to a neighbouring state.”
He recounted that officials of the Lagos State Fire Service were seen at the scene battling to put out the fire emanating from the explosion.

He added that the prompt response of the state fire service officials saved the entire Omole phase II and Magodo estate from the explosion that was said to have left residents in panic.
With the incessant road crashes and traffic incidents, LASEMA’s Director-General, Dr. Olufemi Oke-Osanyintolu disclosed that the state government had conducted empirical analysis of concerned roads and traffic incidents.
In the analysis, Osanyintolu said: “Otedola is a result of road design defects. The road deeply descends and curves at the same time hence not suitable for overladen tankers etc.

“Ojuelegba is a traffic regulation error or tanker driver disobedience, as they have no business using that bridge. The bridge is narrow and curved without adequate barriers, hence not suitable for over laden trucks manoeuvering.”
Giving updates about the accident yesterday, Osanyintolu said no life “was lost to the explosion. On arrival at the incident scene, it was discovered that a 40fit containerised truck loaded with fabric had a brake failure while moving inward Berger.

“It then collided with a tanker loaded with 33000 litres of PMS. The impact of the collision resulted in the fire outbreak that destroyed property.
“LASEMA, Lagos State fire service, Federal Road Safety Corps (FRSC), and Lagos State Neighbourhood Corps (LSNC) were at the incident scene. No casualty was recorded. However, the fire affected the 40ft truck and high tension wire. Commuters advised using Ojota or 7UP exits until traffic eases”.

In its statement yesterday, the Nigerian National Petroleum Corporation (NNPC) commiserated with the government and people of Lagos State, especially the victims of the tanker explosion.

The statement, which was signed by NNPC’s Group General Manager, Group Public Affairs Division, Dr. Kennie Obateru, said while the Group Managing Director, Mallam Mele Kyari sympathised with the victims, Lagos State and Lagosians in general, he felt particularly sad about the re-occurrence of the events which could have been avoided.

Kyari urged motorists and downstream operators “to continue to ensure strict adherence to safety rules and regulations in order to avoid the unfortunate incidents that always lead to loss of lives and or property.”