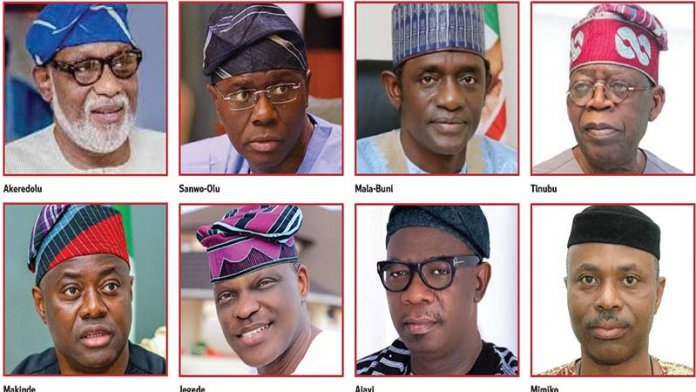 Nseobong Okon-Ekong and James Sowole write that from the series of curious and exciting events that attended the Ondo State governorship contest, heroes and villains have emerged

All Progressives Congress: On Song Again
About three weeks after it suffered a crushing and humiliating defeat in Edo State, the ruling All Progressives Congress is on song again with a decisive victory in the recently concluded Ondo governorship election. Despite an uncertain atmosphere in its governorship candidate selection process, the party was able to close ranks and those who lost in the primary were persuaded to rally round the winner.

Arguably, no Nigerian governor has endured as much hostility from his deputy as Governor Oluwarotimi Akeredolu. His deputy, Mr. Agboola Ajayi constituted himself into a veritable opposition that could not be removed within his administration and sought to displace his principal by seeking the office on the platform of the Zenith Labour Party (ZLP). His clear triumph in the election, particularly against Ajayi is most reassuring. Akeredolu trounced Ajayi with over 222,000 votes. While the difference in votes between the governor and first runner-up, Mr. Eyitayo Jegede of the Peoples Democratic Party (PDP) is over 97,000.

Orimisan Aiyedatiwa: New Confidant, Trusted Ally
Having been once bitten by a back-stabbing deputy, the choice of Mr. Orimisan Aiyedatiwa as running mate to Governor Oluwarotimi Akeredolu must have followed wide consultation and careful consideration. Though the governor had an expansive pool of skilled professionals and experienced politicians to choose from, picking Aiyedatiwa from the lot is a measure of the confidence and trust reposed in him as his new confidante and ally in the last lap of his administration.

Governor Babatunde Sanwo-Olu: Passed an Important Test
As the Chairman of the APC National Campaign Council for the reelection of Governor Akeredolu, Lagos State governor, Mr. Babatunde Sanwo-Olu stands tall for delivering on an important assignment that the ruling entrusted into his hands. There is a good chance the APC may consider him to deploy the same diligence when he is called upon in the future.

Mai Mala-Buni: Good Result of Fence Mending
The Yobe State governor and Caretaker Chairman of the APC, Mai Mala-Buni woukd certainly count the positive outcome of the Ondo governorship election as one of his achievements. An important task of his committee is the peaceful resolution of all aggrieved persons and groups in the APC. And Ondo was looking like it was going to slip out of the hands of the APC if foul sentiments from contestants in the party’s governorship primary was not carefully managed.

Senator Bola Ahmed Tinubu: Back into Reckoning
From being the butt of many insidious jokes following the outcome of the governorship election in Edo State, the acclaimed National Leader of the APC , Senator Bola Ahmed Tinubu quietly retreated into his shell to lick his would and restrategise. However, APC’s victory in the Ondo State governorship contest has put him back into reckoning and retooled his rumoured presidential ambition.

They were arguably the reason, the APC posted poor results in the 2019 presidential and National Assembly elections. Irreconcilable differences and widening rift had adverse effects on the APC in that election, this time around, the readiness of the likes of Olusola Oke, Segun Abraham, Isaac Kekemeke and other APC governorship hopefuls in Ondo State to embrace peace, once the party’s primary was won and lost makes all of them winners along with Governor Akeredolu.

It would have been a big disgrace on the political reputation of APC bigwigs from Ondo State like Senator Omotayo Alasoadura, Minister of State for Niger Delta Affairs, Senator Ajayi Borrofice, Dr. Kayode Ajulo, Mr. Pius Oyekanmi, director general of the Technical Aid Corps and other eminent persons from Ondo state who are big players on the national APC field had the party lost in the Ondo State governorship election. Happily, they all have a victory song in their mouth.

The attempt by the Peoples Democratic Party (PDP) to use this election as an opportunity to consolidate on its performance during the 2019 national election, when its Presidential Candidate, Alhaji Atiku Abubakar, won presidential election in Ondo State and the party also won two out three senatorial districts in the state, has been truncated. The election results may lead to further disintegration of the PDP leadership. Many fair weather politicians in the PDP will switch political party loyalty to may the ruling All Progressives Congress (APC).

The Oyo State Governor, Mr Oluseyi Makinde is a major loser as the Chairman of the National Campaign Council for the 2020 Ondo State Governorship election for the PDP candidate, Mr Eyitayo Jegede. Equally, the election, depleted Makinde’s credibility as he was condemned for raising false alarm that the Independent National Electoral Commission (INEC) chose Prof. Eyitope Ogunbodede, the Vice Chancellor of the Obafemi Awolowo University, as the Chief Returning Officer. However, INEC denied the allegation and the commission’s explanations suggested ignorance on Makinde’s part. Also, the profile of Makinde, whose mother hails from Akure, Ondo State, would have risen higher, if Jegede and the PDP, had won the election.

Had Eyitayo Jegede won the election, he would have been the first indigene of Akure, Ondo State capital, to become a democratically elected governor in the history of the state created in 1976. The loss of Jegede also translates to the loss of the entire Akure Kingdom because the general sentiment among politicians, especially, people from the other two Senatorial districts was that the Ondo Central should wait for another 12 years to produce the governor. Jegede would have been able to play a prominent role in the 2023 Presidential Election, if he had won, that is supposing his benefactor, Alhaji Atiku Abubakar, emerges as a presidential candidate.

Agboola Ajayi: Traitor, Not to be Trusted

The candidate of the Zenith Labour Party (ZLP), Mr Agbbola Ajayi, is a heavy loser in the election in view of the circumstances of his emergence as the party’s candidate. With the results of the election, Ajayi,who is the incumbent Deputy Governor of the state, may eventually lose his seat as the Number Two citizen of the state. The process for the removal of the Ajayi as the deputy governor, was only suspended to avoid distractions, that it may create among stakeholders. Moreover, the result of the election would adversely affect the political future of Ajayi considering the fact that the prevailing sentiment, was that the power should go to Ondo South after the second term of Akeredolu. But Ajayi may have lost the opportunity to ever rule the state. Though he was believed to have deployed a lot of financial resources into the contest, he has betrayed trust and is already being seen as a traitor in many circles.

The fact that the immediate past Governor of Ondo State and a National Leader of the ZLP, Dr Olusegun Mimiko, popularly called Iroko, even lost election in his Ondo West Local Government was a major minus to his political posture. For supporting Ajayi, Governor Akeredolu has never hidden his feelings that the friendship between him and his immediate past predecessor, had become strained forever. The support that Mimiko gave Ajayi may have further widened the gap between him and some PDP governors. It was a case of deflated ego for Mimiko, who many people thought, can get whatever he wants politically in Ondo West and Ondo East. The results of the election has further reduced the polical influence of Mimiko. Some people were even of the opinion, that Iroko is dead politically. He has already been labelled as a traitor by many people, especially, those who do not like his style of politics.

The last minute declaration of the national leadership of the Social Democratic Party (SDP) under its Acting National Chairman, Dr Olu Agunloye, for the PDP, made the party and Agunloye losers in the election. The results of the election, may further scatter membership of the SDP as its governorship candidate, Peter Oyeleye Fasua, declared support for Akeredolu just like its only House of Representatives member, Hon Tajudeen Adefisoye, also worked for the APC candidate.

The ZLP as a party, may go into extinction, sequel to the outcome of the election as the party may not have financiers that can keep the party members for future elections. It was gathered that some leaders of the party, even collected money from the APC leaders in the Saturday election.

Dapo Adelegan and Kunle Olateru-Olagbegi: Attempt to Obstruct a Kinsman

The candidates of the African Democratic Congress (ADC), Prince Dapo Adelegan and the candidate of Action Democratic Party (ADP), Prince Martin’s Kunle Olateru-Olagbegi qualify as losers in this election for being indigenes of Owo like Akeredolu.
The contest of the duo was seen by many prominent indigenes of Owo as attempts to block the chance of another indigene of the ancient town to be elected for second term governor bearing mind that the first executive governor of the state, the Late Pa Adekunle Ajasin, who was from Owo, had his second term truncated my the military.