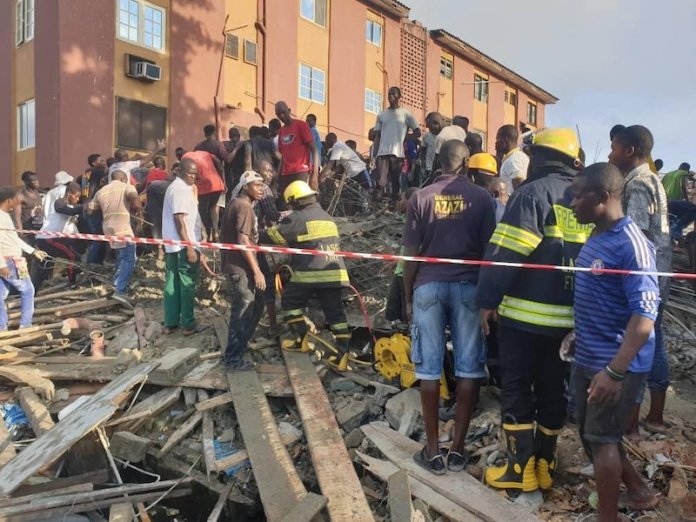 No fewer than seven persons were confirmed dead, nine others injured and scores still trapped under the rubble of a collapsed four-story building at No. 60 Odo Street, Obalende, Eti-Osa Local Government Area of Lagos State.

Although emergency workers are yet to put a total figure to the casualty and fatality rate, it was gathered that some persons have been rescued already.

Confirming the incident last night, the Director-General and Chief Executive Officer of the Lagos State Emergency Management Agency (LASEMA), Dr. Olufemi Oke-Osanyintolu, said the building was under construction before it partially collapsed.

He said upon arrival at the incident scene, rescue operations began immediately even though the cause of the collapse was yet to be ascertained.

“As at 6.20 pm, a total of eight persons (all male) have been extricated alive by the LASEMA Response Team and other stakeholders, and have been attended and quickly transferred to the hospital by LASEMA Paramedics for further medical attention at Lagos Island General Hospital,” he explained.

He, however, said four other persons- three males and one female- were initially recovered dead and handed over to the State Environmental Health Monitoring Unit (SEHMU) at the incident scene.

Noting that a rescue operation was still ongoing, he said the team has secured the incident site and was conducting head count.
According to Oke-Osanyintolu, as at 7 p.m, the casualty figure stood at 15 rescued persons and seven dead.
Giving a further breakdown, he said out of the 15 injured persons, 10 were casualties who were treated for minor injuries while five severely injured persons were transferred to the hospital.

Of the dead persons, he said six men and a woman were exhumed and taken to the morgue.
He noted that joint responders were working on the site with their equipment to ensure they get to ground zero and evacuate all.

On the cause of the collapse, he said the building had been sealed by LASBCA already, yet the owner commenced clandestine operations in the early hours of yesterday morning.

“These illegal activities directly led to this unfortunate incident, which has led to the loss of life and multiple injuries,” he added.