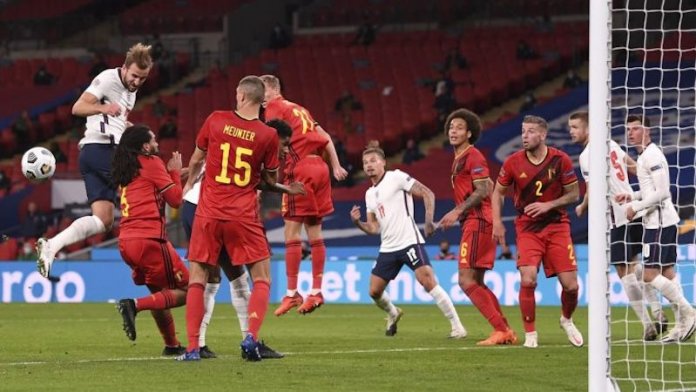 Mason Mount scored a deflected winner as England came from behind on Sunday to beat Belgium 2-1 in the UEFA Nations League.

Romelu Lukaku netted a penalty as the world’s top-ranked team dominated the first half at Wembley.

But after Marcus Rashford fired home his own penalty before the break, England improved and got their reward as Mount’s curler looped off Toby Alderweireld into the net.

England now sit top of League A Group 2 before they host Denmark on Wednesday.

Elsewhere, Wales remain unbeaten in the Nations League after they were held to a lifeless goalless draw away against the Republic of Ireland.

The main talking point of an uninspiring first half was a rejected penalty appeal for Wales after Ethan Ampadu was bundled over by Republic goalkeeper Darren Randolph.

It was not until the 55th minute that either team produced a genuine chance, with the Republic’s Shane Long wastefully heading over from close range.

James McClean was sent off for the hosts after two yellow cards in quick succession towards the end of the game and, although Wales searched hopefully for a late winning goal, neither side really deserved to win an eminently forgettable encounter.

Having won both their first two matches of this Nations League campaign, Wales remain top of Group B4 with a trip to Bulgaria to come on Wednesday.