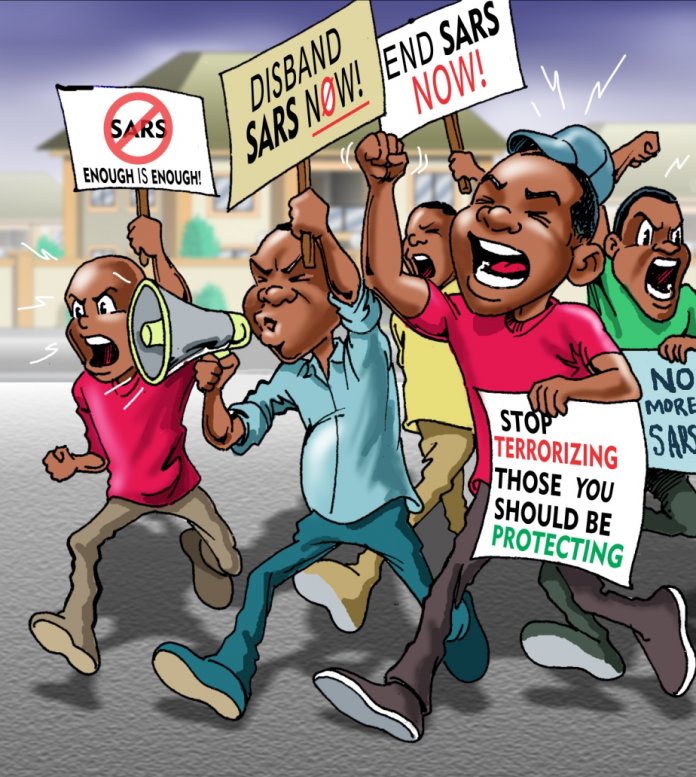 As the police special unit gets more horrific, there is need to challenge the spectre of never-ending impunity

The public outrage against the excesses of the Special Anti-Robbery Squad (SARS) personnel has gone globally viral. It is the tipping point in a tradition of police abuse and brutality that has been with us for years. Now that Nigerians at home and in the Diaspora have taken the campaign to the streets, something thorough and urgent needs to be done before the situation gets out of hand. Already, there have been reports of violence and fatalities, not only of protesters but also of police personnel.

When the campaign started on social media, the Inspector-General of Police, Mohammed Adamu, announced a ban on SARS operatives from further carrying out ‘stop and search’ duties and setting up roadblocks. He also announced other measures aimed at curbing the activities of police personnel who “insists on being incorrigible by engaging in abuse of powers in a manner that degrades, endangers or threatens the life and other fundamental rights of the citizens.” But that decision appeared too little, too late. Having been at the receiving end of brutalisation for a long time, Nigerians do not seem to trust the police to effect a meaningful change. Now the clarion call is that SARS be disbanded.

The opportunity for reforms was lost in 2018 when there were similar protests, mostly online, against SARS. When the then Inspector -General of Police, Ibrahim Idris renamed SARS as FSARS, we warned that such change in nomenclature would not change the mentality of the men renowned for all manner of misconducts ranging from harassment to extortion, sexual assault and extra-judicial killings. We were therefore not surprised that the reign of impunity continued in the squad. Which is why what is required at this moment is not some cosmetic pronouncements but a holistic reform of the entire structure of the police.

We cannot assume that the federal government knows or appreciates the extent of the abuses by this errant police unit that has provoked the current national outrage. In this regard, it might be expedient for President Muhammadu Buhari to institute an urgent ‘Truth and Facts’ judicial commission to unearth the extent of abuses by SARS operatives. This should offer members of the public an opportunity to testify and give evidence of their experiences. The time frame should be short and the recommendations quickly implemented. One possible outcome should be that police personnel found culpable of abusing their power be brought to justice.

Meanwhile, we must warn against any pushback by those who fail to understand that the right to peaceful protest in open expression of their grievances remains a fundamental right of citizens. A cynical approach to a fundamental problem, taken essentially to buy time, like the Inspector-General has done, will not do in an environment where impunity has for long been the order of the day. And saying those who are protesting the crime and criminality of SARS are chasing clouts is, to put it mildly, very irresponsible.

It is important for the president to recognise that at a time like this, silence is not golden. Indeed, with many foreigners joining in the campaign against SARS and with the world watching what could be our George Floyd’s moment, President Buhari may need to address the nation on this matter of urgent national interest.

Ultimately, what we are dealing with is a tradition of citizen’s abuse and brutality that has become part of our police culture. That culture owes its origins to a colonial mindset of an occupation force which is alienated from the public it is meant to protect. Yet, the only culture permissible in a democracy is one that respects the freedoms and rights of the citizenry. Over and above the immediate SARS upheaval therefore, the protests should awaken the government, at all levels, to the increased sensitivity of the public to issues that border on their rights.